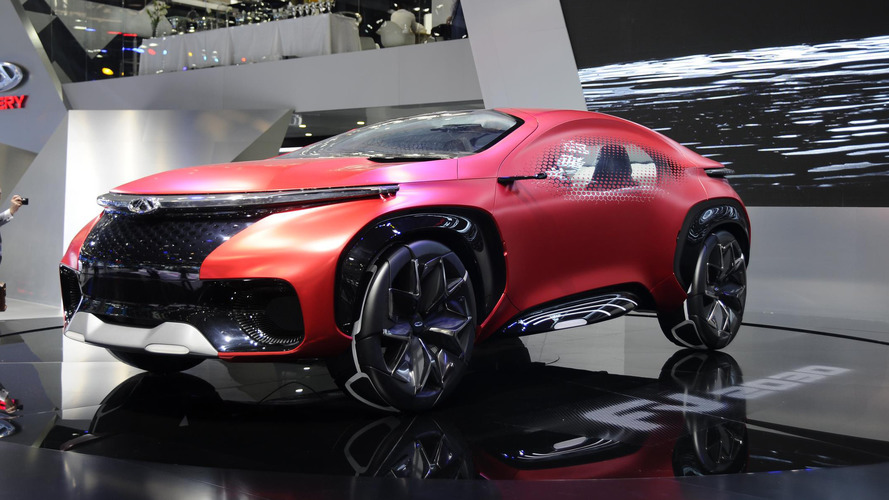 Chery has introduced the futuristic FV2030 concept at Auto China.

Described as an interpretation of the company's future thinking and outlook, the radically styled FV2030 is a crossover coupe that features a bold front fascia with a 'floating' grille, massive air intakes, and a relatively high hood.  The unique styling continues further back as the concept has semi-transparent gullwing doors, gloss black fender flares, and massive alloy wheels which ride on specially designed tires.

Designers also created eye-catching side skirts and camera pods which replace the traditional side mirrors.  Last but not least, the FV2030 has a tailgate-mounted spoiler, an aluminum skid plate, and a floating LED taillight bar.

Chery didn't have much to say about the interior but the minimalistic cabin has white leather seats and LED lighting.  More interestingly, the automaker envisions a "fantasy" 3D holographic display that provides vehicle and infotainment information.

Since the FV2030 is a concept, Chery declined to release performance specifications but confirmed the model is a new energy vehicle which features an electrified powertrain.  The crossover also has "smart pilotless technology" which means it has some autonomous driving features.

The Auto China 2016 is officially opened on April 25 at the new China International Exhibition Center. With the theme of "Fun to Drive, Enjoy Future with Chery", Chery Automobile exhibits its two product series of Arrizo and Tiggo for the first time on this motor show. Chery shows 12 vehicle models, 14 exhibited cars and four latest powertrains, among which Tiggo 7 and Tiggo 3x are released for the first time. Moreover, an "FV2030" brand vision concept car interprets Chery's future product design concept, thinking and outlook. The layout of the whole exhibition booth comprehensively shows the product and technology achievements of Chery in its strategy 2.0 age.

At the motor show press conference on this day, a brand new Chery in the 2.0 age is comprehensively and stereoscopically shown in multiple layers, from the company's development strategy to the international R&D team and to the latest brand vision concept car. The team from Chery Technical Center Shanghai (CTCS), the core technology team makes its debut at the "Chery Night" brand press conference taking place on April 20, and Zheng Kai, a well-known Chinese movie star as well as the Chinese celebrity endorser of Chery Arrizo 5, are present at Chery's exhibition booth, attracting the attention of hundreds of media present. With the unveiling of the FV2030 brand vision concept car and Tiggo 7, the second strategic product, the exhibition booth of Chery at Auto China 2016 is formally unveiled.

"Spreading both wings to fly": Two series of Arrizo and Tiggo make their full debuts and Chery's products enter the 2.0 age

Two product series of Arrizo and Tiggo make their full debuts at this year's Auto China 2016, which marks the overall launch of products developed under the forward product development system of international standards after Chery's strategic transition and shows Chery's achievements of transition.

The exhibited products of the Arrizo series include three models: Arrizo 3 Sport, Arrizo 5 and new Arrizo 7. As the first product of the 2nd generation products launched by Chery under the new system, Arrizo 5 has super excellent appearance, the DDS sport power control system and all time smart interconnection technology (Cloudrive2.0 smart cloud interconnection driving system). Its monthly sales volume reached 12,000 units since it was launched only one month ago. It has become a strong performer among Chinese-branded cars and formally acted as the hot selling product among the Arrizo series products. On the basis of the 1.5LDVVT+CVT gold powertrain carried by it, Arrizo 5 will launch the "Blue motion" vehicle model in the future which will carry the intelligent start & stop system (ISS), AMS power management system, gear shift warning and other technologies, and the fuel consumption/100km will be as low as 5.4L.

The exhibited New Arrizo7 model realizes 15 style upgrades, development of 5 new configurations and 6 performance improvements, etc. The powertrain will be upgraded into the 1.5TCI+CVT. In terms of smart interconnection, it will carry Chery's Cloudrive2.0 smart cloud interconnection driving system. It realizes the comprehensive upgrade of product performance and consumer experience.

The Tiggo series products exhibited by Chery include Tiggo 3X, New Tiggo 3 ,new Tiggo 5 and Tiggo 7, among which Tiggo 7 and Tiggo 3X are released for the first time. Tiggo 7 is a production vehicle model developed with the "TX" concept car as the prototype which grabbed the "Award for Best Auto Design" in the "Auto? Design Conference" in Europe and was elected the "Best Concept Car" in the 2012 Geneva International Motor Show. It inherits the family design language of Chery design—HDS streamlined body design style, applies the hydrodynamic profile design and creates the natural sense of stereoscopic sculpture of the vehicle. Its natural and fashionable style attracts a lot of visitors. Tiggo 7 is equipped with the high performance DDS sport control system including the accurate driving control chassis and carries the 1.5T engine, 6MT fuel saving transmission and CVT\DCT automatic transmission. In terms of smart interconnection, it carries the Cloudrive2.0 smart cloud interconnection driving system; while in safety, it possesses the latest CNCAP five-star safety standard design and the AVM panoramic image system of European safety standards, etc. In addition, Tiggo 7 will be initiatively equipped with all-round smart air-conditioner which will fully purify the air in the car. The sound filtration system will ensure the health of drivers and passengers in an all-round way.

Chery's Tiggo 7 and Tiggo 3X will both be launched in the second half of this year. By then, Chery will become one of the few Chinese OEMs possessing complete SUV product series, which will further consolidate Chery's top position in the SUV market.

The 372F engine is the orthostichous 3-cylinder and 4-stroke naturally aspirated gasoline engine independently developed by Chery. The engine's reliability is verified through the bench test, over ten thousand hours of design verification in the whole vehicle road test, one million market car parc and the rigorous trial of markets in different fields. By virtue of good power performance, economic efficiency and reliability, this type of engine has been exported to Fortune 500 enterprises in the US and Japan and the total number of exported engines has reached nearly 100,000.

Arrizo 5EV, Arrizo 7PHEV and Tiggo 7PHEV are the three new energy products with brand new technologies of Chery. Arrizo 5EV is a battery electrical vehicle which possesses the Telematics system integrating the radio communication technology, satellite navigation system, network communications technology and vehicle computer technology. Its technology is at the leading level in the industry. Arrizo 7PHEV and Tiggo 7PHEV are the completely self-developed plug-in hybrid power vehicle models of Chery. The P2 hybrid power system carried by them comprises power coupling device, single motor and transmission, which is the hybrid power technology widely used by international mainstream OEMs such as Mercedes-Benz and BMW at present. It is also equipped with the braking energy recovery system developed by Bosch which can improve the range to the largest extent. They are stable and reliable with high fuel efficiency, good power performance, strong technology inheritance and broad market outlook. They can travel 50 km under the battery electrical state and the comprehensive range can reach 1,000 km. The comprehensive fuel consumption/100km is only 2.2 L.

In order to fulfill the goal of selling 200,000 new energy vehicles by 2020, on April 15, Chery Automobile and Kabushiki-gaisha Yasukawa Denki signed a contract to establish a joint venture, Chery Yasukawa E-Drive System Co., Ltd., to jointly develop and produce new energy vehicle motors and control systems. After the project is established, the gaps in China's high-end E-drive system will be filled in; the technological capacity and supporting capacity of Chery's new energy in motors and control systems will be greatly improved; the technology chain of Chery's new energy industrialization will be improved; and the formation of the core competitiveness of Chery's new energy vehicles will be further promoted. This project, together with the 60,000 aluminum car body project established in February, will become important strategic steps for Chery to fulfill the goal of annual production and sale of 200,000 new energy cars by 2020.

Explore the future: "Fun to Drive, Enjoy Future with Chery"
At this year's Auto China 2016, the biggest highlight of Chery's exhibition booth is undoubtedly the "FV2030" concept car (Future Vision 2030). It made its debut at the "Chery Night" brand press conference on April 20 and was reported by many media at great length. This time, it still attracts the eyes of numerous visitors. Its smooth body curves, huge plug-in hub, supercool gullwing door, fantasy 3D holographic screen and smart pilotless technology show the perfect integration of three future technologies: intelligence, Internet and new energy as well as Chery's bold exploration of future automobile technologies and the industrial development trends.

Apart from cutting-edge technologies, the "FV2030" concept car also bears the core value of Chery's brands and its latest product design idea. "FUN" is Chery's brand new brand essence which means Chery's products allow the consumers to enjoy their life and personal freedom. Secondly, it designs fashionable, dynamic and supercool styles through the family and individualized design language, allowing the consumers to experience difference. Thirdly, its products and brands and trustworthy. "FV2030" also bears Chery's brand new design idea — Life in Motion. "Life" refers to life and lifestyle, while "motion" represents the constant evolution and development of the nature and human beings. The design idea of this concept car reflects Chery's deep thinking on the lifestyle of youngsters in the future, such as dynamic, innovation, high technology and flexibility. All of these in turn will affect and lead the consumption tendency of the young target consumer group.

Chery's exhibition booth at Auto China 2016 not only shows the technology and product upgrade in Chery's strategy 2.0 age in all dimensions, but also comprehensively demonstrates Chery Automobile's grasp of the development trends of Internet, electromotion and intelligence of the automobile industry in the world. It also shows the world a young and vigorous Chinese vehicle brand which has cutting-edge technologies, outstanding strategies and international vision.