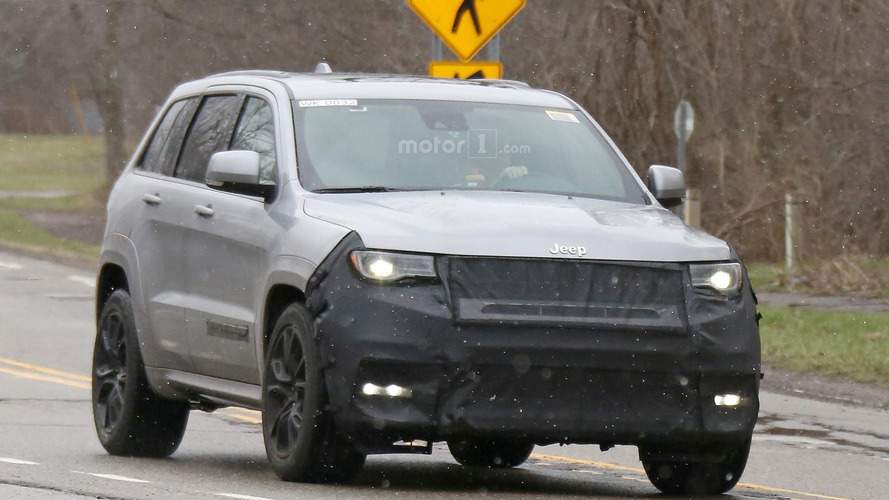 Jeep is hard at work testing the Hellcat-powered Grand Cherokee said to be baptized “Trackhawk.”

Jeep is hard at work testing the Hellcat-powered Grand Cherokee said to be baptized “Trackhawk.”

Spotted roaming the streets of northern Michigan, this is Jeep’s idea of the ultimate performance SUV. It’s not due until July 2017, but it will be well worth the wait taking into account it is going to pack the mighty supercharged 6.2-liter V8 engine. The reason why this prototype has camouflage on the front fascia is to hide the redesigned bumper and what appears to be a modified grille. Nevertheless, you can easily spot the additional air intake which will be there to aid cooling of the mighty Hellcat.

It’s unclear at this point whether the eight-cylinder will have the full 707 horsepower (527 kilowatts) and 650 pound-feet (880 newton meters) torque of the Dodge Charger and Challenger Hellcats. Some are saying the Grand Cherokee Trackhawk will not be able to take advantage of all the ponies due to hardware limitations, specifically the all-wheel-drive system.

Even if it will be detuned, the unit will still be significantly stronger than the 6.4-liter V8 HEMI engine which powers the 475-hp Grand Cherokee SRT. The latter sprints to 60 mph (96 kph) in 4.6 seconds, whereas the Trackhawk is estimated to accomplish the task in just 3.5 seconds. An increase in top speed over the SRT’s 157 mph (253 kph) is very possible.

Other than the front fascia, this prototype doesn’t seem to have any other changes compared to the SRT version. However, chances are the final product will feature a slightly more aggressive body to further separate the two. It is believed the SRT and Trackhawk will peacefully coexist, as Jeep apparently doesn’t have plans to kill the former in order to make room for the latter. While it’s too soon to talk about pricing, you can imagine the hardcore version will be substantially more expensive than the SRT which costs $65,495 MSRP.

When Jeep said that it’s going to be out in July 2017, it was probably referring to the model’s market launch, so a reveal will likely occur several months earlier.