The wing-shaped M is peeking through the black tape on the tailgate.

Known in Japan until 2019 as the Demio, the Mazda2 is getting on a bit. The third generation came out back in 2014 and feels quite outdated compared to other subcompact hatchbacks. Our spies have managed to capture images of the new model, and to no one's surprise, the supermini from the Zoom-Zoom company will once again be a rebadged Toyota Yaris.

Mazda did a pretty bad job at hiding the badges as we can easily see the winged "M" peeking through the black tape on the tailgate. Squint your eyes and you can notice the front logo as well, further denoting the next Mazda2 will be nothing more than a hybrid Yaris with a different badge. That makes sense considering the automaker has already disclosed plans to roll out an "OEM-supplied model based on Yaris THS [Toyota Hybrid System]" in Europe to meet increasingly stringent emissions regulations.

In some markets, the Yaris fitted with the hybrid 1.5-liter powertrain is available with an optional all-wheel-drive powertrain, but we wouldn't hold our breath for the Mazda version to get AWD. It's the same story with the high-performance GR Yaris as there are slim chances it will spawn a Mazdaspeed2 derivative.

It will be a while before Mazda will transition its smallest car to the next generation considering the current model was updated just a few months ago. The final revisions include a more efficient 1.5-liter gasoline engine and the reintroduction of a 115-horsepower specification alongside the 75- and 90-hp outputs.

The Yaris Takes Many Shapes: 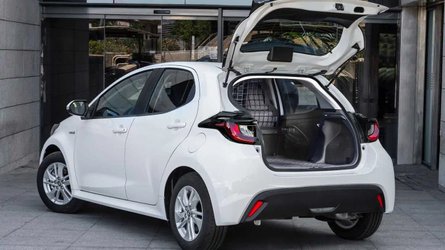 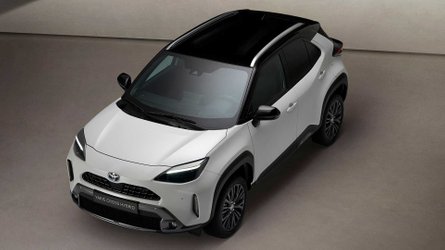 Expect the new Mazda2 to come exclusively with five doors seeing as how only the GR Yaris can be had with a three-door layout. The Toyota version has also served as the basis for a crossover, but we have doubts there will be an equivalent Mazda model since the company already has that segment well-covered.

As a final note, Toyota has a similar deal with Suzuki, allowing the latter to slap its badge on the Corolla and RAV4 PHEV for the Swace wagon and Across SUV, respectively.