Lexus announced its enhanced IS 500 F Sport Performance sedan early in 2021. The sporty four-door is no slouch thanks to a rev-happy V8 punching out 472 horsepower (352 kilowatts). Pricing wasn't mentioned at its debut, but with the sports sedan ready for prime time, we can tell you it starts at $56,500. Add in the mandatory $1,075 delivery fee and the total cost is $57,575

That's certainly quite a jump from the IS 350 F Sport, but then again, you're getting considerably more power. In fact, the naturally aspirated 5.0-liter engine is powerful enough to elevate the IS into some rather notable four-door company. Power-wise, the V8 IS matches the base BMW M3, the Mercedes-AMG C63, and the Cadillac CT4-V Blackwing while costing thousands – even tens of thousands – less.

Don't follow the temptation to cross-shop those models, however. As enticing as it might be, our time behind the wheel of the IS 500 F Sport Performance showed us it's not in the same league as those focused sports sedans. Rather, its mid-four-second 0-60 time and cushioned ride is a better match for the second string despite the power difference. With that in mind, here's a quick comparison to see how the most powerful IS fares against its true rivals, namely the Mercedes-AMG C43, the BMW M340i, the Audi S4, and yes, the Cadillac CT4-V. 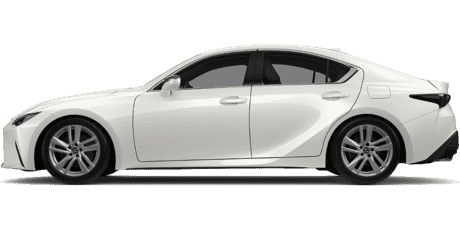 Perhaps the bigger question here is whether the power-infused IS 500 is worth the steep price increase versus the IS 350 F Sport? Starting at $42,950 before destination fees, the IS 350 is nearly $14,000 less. That's not insignificant by any stretch of the imagination, and with the same bones under the IS 500 F Sport Performance, it doesn't feel different until you mash the throttle. One might say the biggest competitor to the IS 500 is actually the cheaper IS 350.

Look for the Lexus IS 500 F Sport Performance to reach dealerships later in the fall of 2021.