It took 12 weeks to complete this paint pattern.

The McLaren Special Operations customization division crafts a custom Speedtail with an amazingly complex paint finish. The crew calls it Albert after an early prototype for the supercar. The McLaren Beverly Hills dealer commissioned this unique machine.

Albert wears a mix of Magnesium Silver and Ueno Grey in a pattern that is supposed to evoke the camouflage wrap on the 2018 MVY02 Speedtail prototype. After building a standard Speedtail, the MSO team needed 12 weeks to apply the paint that has a complex gradient pattern that flows from dark in the front to the lighter shade in the back.

Two weeks of that time was for two people to mask the body, and it required nearly two kilometers (6,562 feet) of tape. The actual paint application took six weeks. Then, it took four weeks for the paint to dry and then reassemble the body panels onto the Speedtail. After checking the alignment of the pieces, the clear coat went over the car.

The name Albert goes back to the early McLaren F1 test mules. Their testing happened at the facility on Albert Drive in Woking, England, where the team developed the iconic supercar. In recognition of this history, the crew crafting the Speedtail gave this name to one of the prototypes. It was the first example to go out onto public roads. 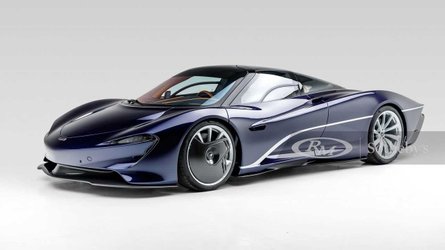 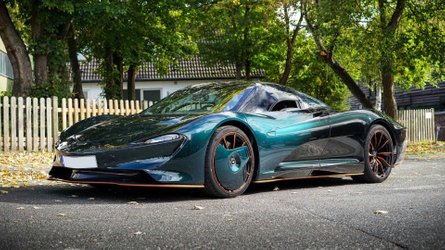 You Could Buy This McLaren Speedtail For The Lowly Price Of $4.8M

The Albert Speedtail is among the final units of the 106-car run of the slippery McLaren model. The powertrain is a 4.0-liter twin-turbo V8 with hybrid assistance that makes a total of 1,035 horsepower (772 kilowatts). With a long enough runway, it can reach 250 miles per hour (403 kilometers per hour).

If you want to see the Albert Speedtail, the unique supercar debuts on Sunday, August 8, at Sunset Plaza, Los Angeles, at a cars and coffee event called Sunset GT.