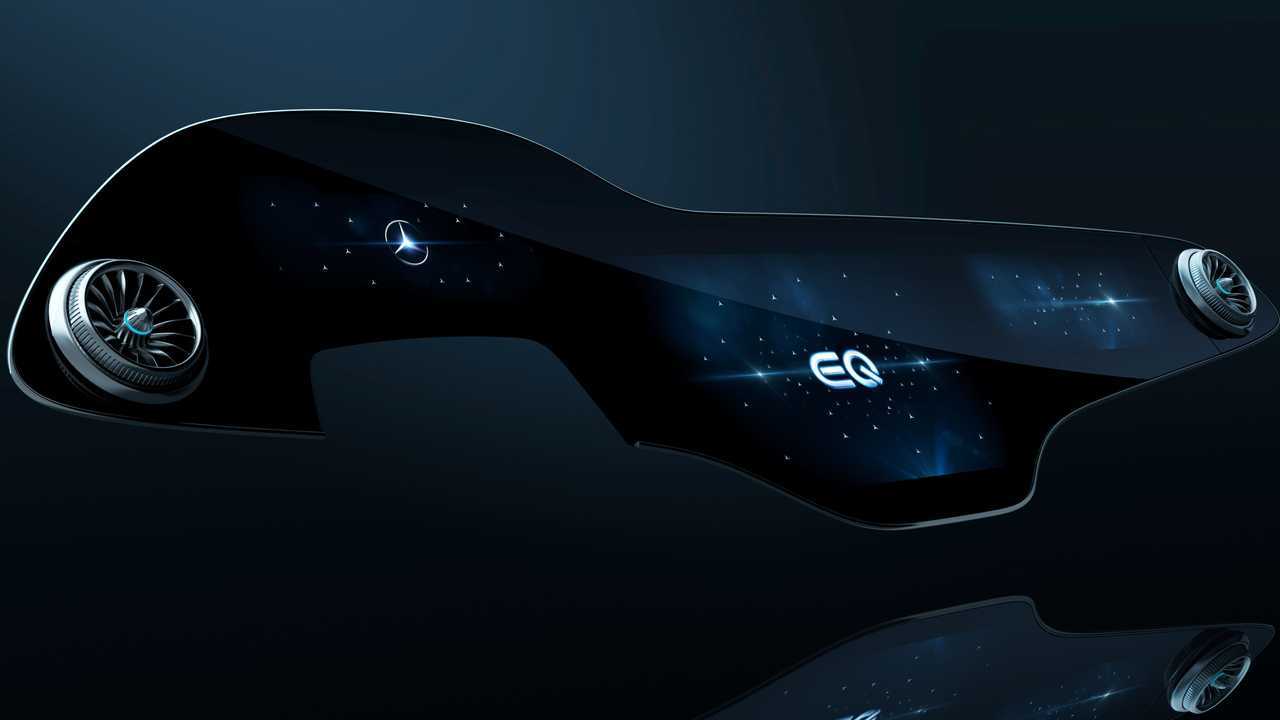 The dash-spanning display will likely spread to other Benz automobiles in the future.

The Mercedes-Benz User Experience (MBUX) infotainment package debuted at CES 2018 in Las Vegas, Nevada. Now, almost exactly three years later, the company is unveiling its newest iteration of the technology, dubbed Hyperscreen. Set to make its first appearance in the 2022 EQS flagship EV, the MBUX Hyperscreen makes good use of artificial intelligence and machine learning to integrate better into its users’ lives and commutes.

But those features aren’t nearly as obvious to the casual observer as the Hyperscreen’s sheer size and design. Spanning nearly the entire width of the EQS sedan’s interior, the infotainment package bundles three distinct OLED screens, including one dedicated to the front passenger, to allow for more intuitive operation than current MBUX systems. It’s a fitting gee-whiz addition to the forthcoming EQS electric vehicle, giving tech-junkie early adopters something to brag about to their curious neighbors.

Spanning more than 56 inches from edge to edge, the Hyperscreen’s curved glass could be the largest such piece of silicate in the automotive industry today – it definitely beats out the Escalade’s 38-inch display. But, like the Caddy, the Mercedes-Benz Hyperscreen is actually composed of three distinct points of interaction, all encapsulated under one smooth pane of glass.

For example, the driver faces a comprehensive set of digital gauges – similar to those found in the 2021 S-Class sedan, but adding distinct EV functions that monitor brake regeneration, state of charge, and driving dynamics. Next to and slightly below the instrument cluster is a center infotainment display, which defaults to a massive navigation map and minimalist phone and audio controls. Finally, a short, wide screen appears on the dashboard just in front of the passenger, displaying either entertainment goodies when the seat is occupied or a stylish galaxy of three-pointed stars when it’s just the driver up front.

On either side of the glass is a circular HVAC vent, seemingly floating above the surface of the glass. The company says the pair of air outlets tie the analog world with the digital. Sure, whatever you say. Nevertheless, the location and function of the vents appear to be very attractive and unique, so kudos to the interior designer who thought to place them there. More visual pop will come via the screen’s single-frame plastic surround, which features three extremely thin layers of “Silver Shadow” coating for a luxurious feel and appearance. Ambient lighting along the lower edge of the glass will impart a stylish floating effect.

The slightly curved pane of glass is rendered at temperatures exceeding 1,200 degrees Fahrenheit, ensuring distortion-free clarity and surprising strength (for comparison, high-temperature glass is molded at about 1,100 degrees, while Gorilla Glass gets heated to 750 degrees). The company also tested the panel for safety in extreme cases, like a particularly catastrophic car accident. In such rare situations, the glass features predetermined breaking points at either end and five mounting points that yield in a targeted manner thanks to a honeycomb substructure.

Able to store several driver and passenger profiles, the Hyperscreen uses artificial intelligence to make comfort and vehicle operation suggestions. For example, the Mercedes-Benz EQS features a suspension that can lift the car slightly higher, useful when approaching a steep driveway or traversing a potholed street. If the driver regularly engages the suspension lift in a particular place, the Hyperscreen will learn that behavior and suggest the action in advance, easing the process for the driver.

Another such use case is an action that’s linked to a particular time and location. If the driver makes a phone call every Tuesday evening after leaving work, the EQS can now make that suggestion to the driver, displaying a business card and/or a photo of the person they might like to call. Since each Hyperscreen action is linked to a personal profile, if someone else is behind the wheel, the vehicle won’t make such a suggestion.

Even without the AI, the basic system appears to be rather intuitive. The center Hyperscreen display default, known as the “zero-layer” features map, audio, and phone controls – Mercedes-Benz’s research suggested those were the most common functions drivers used in prior MBUX iterations. This means that calling up one of those features will be rather easy, accessible as they are from this zero-layer. “Hey Mercedes” voice commands appear here as well, commanding just about any feature on the Hyperscreen.

Of course, we admit some trepidation any time we see an infotainment package with no hard buttons. While we don’t know what the rest of the EQS’ interior will look like, it’s possible that it won’t include such old-school inputs as a volume knob or physical climate controls. We’ll wait to judge until we know for certain, but if Mercedes doesn’t include real dials and toggles, it had better make the digital versions very easy to use.

The MBUX Hyperscreen will be an option on the EQS EV family, likely headed for both the sedan and SUV variants. Mercedes hasn't committed to specific timing for those vehicles, but we expect the S-Class–sized electric sedan to debut in the summer, with the SUV following in autumn or winter.

We also wouldn’t be too surprised to see the Hyperscreen appear in other Mercedes models soon, perhaps as a second-year optional addition to the new S-Class sedan, which already boasts MBUX artificial intelligence. As beautiful and seemingly user-friendly as it is, Mercedes-Benz would be foolish to confine the Hyperscreen to just one model family.