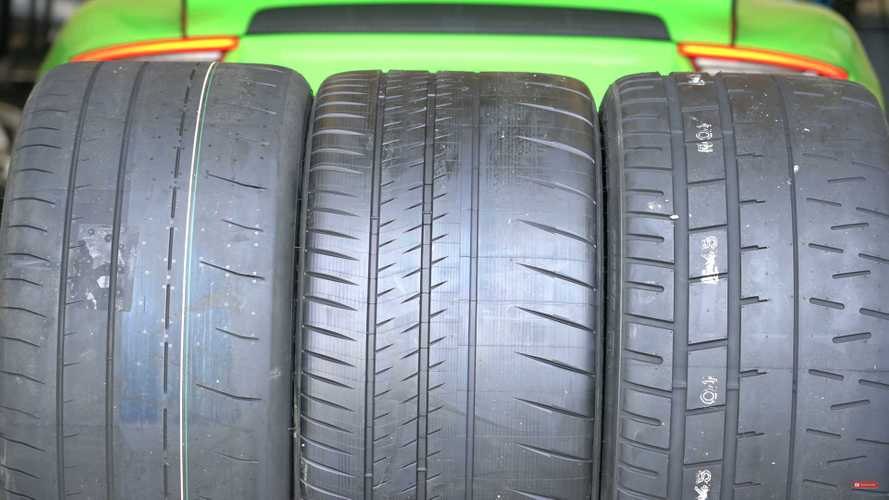 Which hardcore track tire is the best?

Are tires the most important part of a car? That depends on who you talk to, but one thing is for certain. No matter what is done under the hood, in the greenhouse, or beneath the skin, it matters naught if there’s not a good connection to the road. Tyre Reviews on YouTube has demonstrated time and again that not all tires are created equal, and in this latest video, that conclusion holds true among hardcore track tires.

Specifically, the video compares the Michelin Pilot Sport Cup 2 with the Goodyear Eagle F1 SuperSport RS and the Pirelli P Zero Trofeo R. Generally speaking, these are the top-tier tires folks will consider for track day events and as such, they’re all tested at Michelin’s own test track in France. To ensure the tires get a workout, the test vehicle is a corner-straightening Porsche 911 GT3 RS. And boy do they get a workout.

Two sets of tires were used in this comprehensive evaluation. One set was devoted to wet handling, wet braking, and dry braking. The other set was devoted strictly to dry handling, evaluated over several laps to gauge initial first-lap grip and subsequent laps once the tires were up to temperature. And if you think Michelin gets the automatic win because the test is conducted at the company’s track, think again.

We will leave all the details to the video, as there is definitely much to talk about. Overall, the Michelins and Goodyears were quite similar in wet conditions, exhibiting a bit more understeer due to hydroplaning at the front. The Pirelli tires had the opposite issue – hydroplaning at the rear which required a bit more sawing at the wheel but despite that, the Pirellis had a more manageable feel. Because of that, the Pirellis returned better wet-track lap times than the others. The wet braking was better as well.

It's All About The Tires:

Can A Porsche 911 On Snow Tires Carve Corners At A Race Track?
⠀

In dry conditions, it’s a different story. The Michelins felt sharper and had immense grip, ultimately returning the best lap times in the group both for first-lap and follow-up laps. The Goodyears were a close second – in fact, the initial lap was identical to the Michelins. But times fell off steeper on follow-up laps with the tires feeling less secure on the road. The Pirellis were the slowest of the group, but they also exhibited the best characteristics that drivers appreciate. They felt predictable and manageable, which translates to more confidence for the driver to push the limits and have some fun.

Braking accolades also went to Michelin, though all three tires had similar performance. As with handling, the Pirellis came in third but only by a slim margin, and with more temperature in the tires, they actually outperformed the Goodyears.

So, what’s the verdict? It should be noted that both Michelin and Goodyear developed their tires with the 911 GT3 RS in mind. In that sense, they are OE tires and that shows with the default to understeer in wet conditions, and sharper characteristics in the dry. As for the Pirellis, they had the best wet performance with the slowest times in the dry, but were easier to manage in all conditions. One might say they aren’t optimized for the GT3 RS, but the end-result is something that feels more comfortable and manageable.