Never mind those 'exhausts.' They're fake.

Right off the bat, we should mention four-wheel steering isn’t exactly groundbreaking technology as plenty of cars have had it. From the original BMW 8 Series (E31) to the much more humble Renault Laguna, many cars are able to steer their rear wheels. In almost all situations, the rear wheels turn in the opposite direction to the front ones at low speeds to improve maneuverability when navigating through tight streets or when parking. At higher speeds, the rear wheels turn in the same direction as the front ones to improve a vehicle’s stability.

It would appear the next model in line to get what some prefer to say rear-wheel steering is the Mercedes EQS. This heavily camouflaged prototype was caught by our spies while making a right turn, with the rear wheels slightly steering towards the left. Given the car’s massive wheelbase, we’re not too surprised the engineers are trying to boost the EQS’s low-speed maneuverability as much as possible by making the rear wheels turn as well.

Whether it will be offered standard across the range or optional remains to be seen, but we’re leaning towards the former scenario given the model’s positioning in the range and its high price.  After all, the EQS will represent the cream of the crop among Mercedes’ electric vehicles, with a starting price that will command a significant premium over its internal combustion engine counterpart, the S-Class.

Although it’s still very much disguised, we can easily notice the horizontal cap to conceal the charging port on the driver’s side front fender. While this prototype has conventional door handles, we’ve seen other test vehicles featuring those nifty pop-out handles that will also be available for the next S-Class (W223).

From Concept To Prototype: 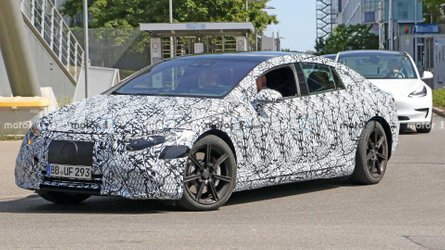 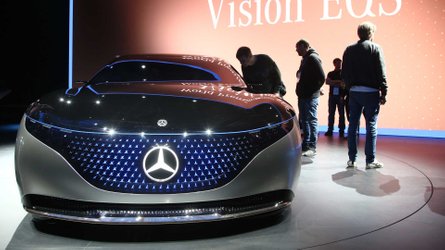 Once again, we’re getting the feeling the EQS won’t be a sedan in the traditional sense of the meaning as the prototype appears to be a liftback/hatchback, unlike the smaller EQE we’ve spied recently showing a proper trunk lid. That’s a good idea in our books since it greatly improves practicality by making it easier to load and unload items, and it’s a body style choice Mercedes also decided to go with for the confusingly named AMG GT 4-Door Coupe.

The Mercedes EQS could be unveiled in production guise later this year or at some point in 2021, with rumors suggesting a hot AMG variant will follow to serve as the crown jewel of the range by packing in excess of 600 horsepower.