The Magnetic Selective Ride Control will become a standalone option.

The GM-UAW strike had a negative impact on the 2020 Chevrolet Corvette as availability of the C8 was hampered by a delay in the start of production. Not only that, but the initial model year for the mid-engined ‘Vette took another hit because of the coronavirus pandemic, forcing General Motors to stop production at the Bowling Green factory at the worst possible time considering the immense demand the sports car is enjoying. Customers can no longer order a 2020MY Corvette, so all eyes are now on the 2021MY.

Aaron Bradlee Adams, a member of the C8 Corvette Owners forum on Facebook and salesperson at Simms Chevrolet in Clio, Michigan, has stumbled upon what appear to be some of the changes that are in tow for the 2021 Corvette. The following info was sourced from the Global Connect Order WorkBench, a software that dealers use to place orders for new cars.

Some of the highlights include two fresh paints – Red Mist Tintcoat and Silver Flare – which according to Corvette Blogger will come to replace Long Beach Red and Blade Silver, respectively. It’s a bit unusual to see such a change after just one model year, but it appears Chevy is looking to update the color palette already. The former is said to be in the same vein as Crystal Red Metallic and Magnetic Red Metallic, while the latter might have already been revealed on the C8.R.

A visible carbon fiber finish for the high-wing and the door intake trim will be available for the 2021 Corvette, along with a bunch of body stripes in a multitude of colors. Sadly, the visible carbon fiber ground effects option will remain unavailable for the time being. On the flip side, the good news is customers will be able to get the Magnetic Selective Ride Control as a standalone option without having to go for the Z51 package.

Owners Are Already Modifying Their Cars:

Twin-Turbo Corvette C8 Hits The Dyno, See How Much Power It Makes
⠀ 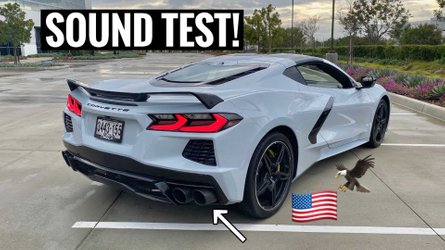 There are some changes inside as well where wireless Apple CarPlay will become standard across the entire range and the 3LT will be offered with a couple of new seat combos. All-weather floor liners are also listed, along with a car cover depicting the C8.R race car. We’re not sure what the “Stingray R” theme is about, but Corvette Blogger speculates it might have to do with a special-edition model with visual upgrades derived from the C8.R. Attached below is an image that emerged last month showing what might be the Stingray R as depicted in Chevy’s visualizer.

As you may recall, assembly of the 2021 Corvette is scheduled to kick off in September, provided the coronavirus outbreak will not hinder production of the mid-engined sports car furthermore. While official pricing details are not available at the moment of writing, it’s widely believed the second model year will cost more, which would consequently put an end to the sub-$60,000 base model.