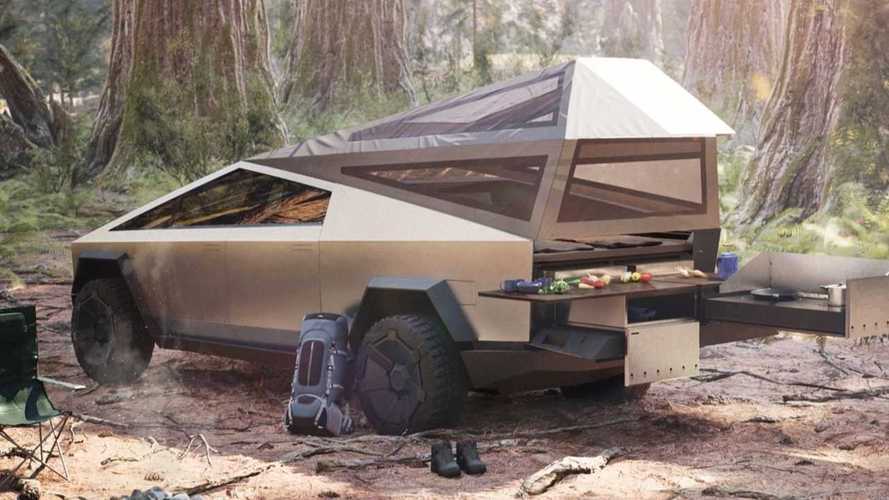 Sounds like a great way to see the country.

UPDATE: Twitter user @mithunoorath asked if the Cybertruck's "camper mode" would be an accessory to purchase, and Elon replied with a simple "Yes."

Elon Musk did as he promised and shocked the world with the debut of the Tesla Cybertruck this evening. Its design may be the most polarizing to come along since... well, ever, but there are also many details about this truck that have us excited. One in particular is the possibility of a camping set up featuring a bed tent and outdoor kitchen.

Everything We Know About The Cybertruck:

Tesla Cybertruck Debuts With Sci-Fi Personality And Gobs Of Power
⠀

The possibility that Tesla offers such an option is based solely on an image of the Cybertruck set up for camping that was among the official batch released by the company. It may be this image is only meant to show what's possible in terms of upfitting the Cybertruck. That said, Tesla is surely aware how popular overlanding has become and that it's one of the first uses people will think of for the Cybertruck.

What we see in the official image is the Cybertruck parked in what we're guessing is Northern California's forests of giant redwood and sequoia trees. The trucks tonneau cover is pulled back and a tent is fitted over the bed that extends the line of the A-pillar all the way to the back of the truck. The new outline creates a living space in the bed of the truck where one could sleep and sit up, but that's about it.

Not to be outdone by the built-in kitchen competitor Rivian showed off for its R1T truck earlier this year, Tesla has a full outdoor kitchen that extends out from beneath the truck bed. It looks like there's a two-burner electric stove and plenty of counter space for prep work. but no sink or cooler.

Again, this is only a single image released by Tesla with no context or details about what it could mean. It does, however, have our minds racing thinking about the Cybertruck as a platform for overlanding and what sort of rigs could be made.

There's plenty of time for planning, though, as the Cybertruck isn't scheduled to reach production until late 2021 and the longer-range 500-mile version until 2022.