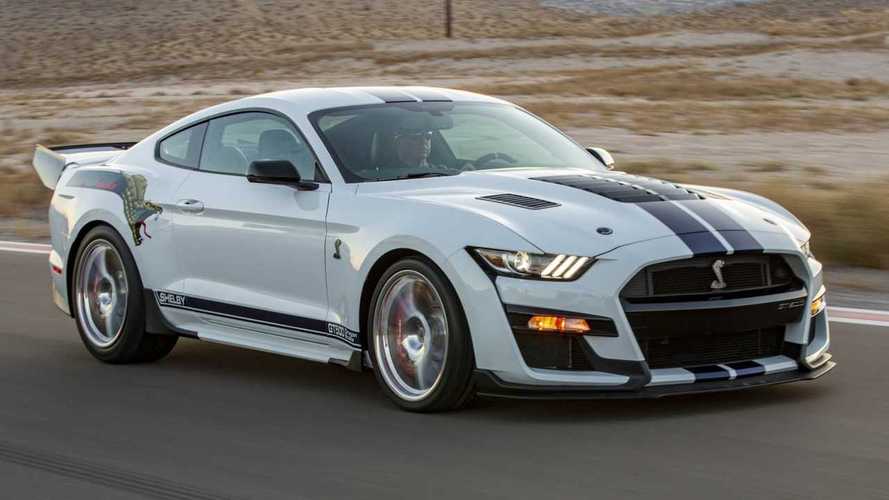 The extra punch is complemented by a meaner body kit.

It was only last week when Shelby American announced plans to upgrade the new GT500 and now we already have the first package tailored to the ultimate Mustang. Officially labeled as a concept car, the Dragon Snake premieres today at SEMA with a slightly more aggressive body kit and newly designed one-piece forged aluminum wheels wrapped in performance tires.

From the carbon fiber hood and rear spoiler made from the same material and derived from drag cars, you can immediately tell this isn’t a standard GT500. Shelby American is already considering a widebody kit for those who still feel the Mustang doesn’t look mean enough. Rounding off the visual changes are the individually numbered dash plaque and engine plate.

There’s more to the Dragon Snake than these cosmetic upgrades as the changes are skin deep. For example, the 5.2-liter V8 engine has been taken from the series 760 horsepower to more than 800 hp thanks to an upgraded supercharger. While Shelby American doesn’t say anything about torque, we imagine it has also gone up from the stock 625 pound-feet (847 Newton-meters). The GT500 already does 0 to 60 mph (96 km/h) in 3.3 seconds and the quarter mile in 10.7 seconds, so it should be an absolute rocket with even more power.

The modified Ford benefits from an upgraded exhaust system as well as a Shelby American-tuned suspension with MagneRide and optimized springs and sway bars at the front and rear. All of these suspension optimizations have been done to improve the vehicle’s acceleration in a straight line, but also to maximize grip.

In addition, the seven-speed dual-clutch automatic transmission has been tweaked to cope with the extra power delivered by the V8. The list of modifications is quite extensive as it also includes high-flow catalytic converters and a glass package shaving off some weight compared to the regular coupe.

There’s no word about pricing, but math starts at $70,300 for a standard Shelby Mustang GT500 and rises to six figures for the fully loaded variant.