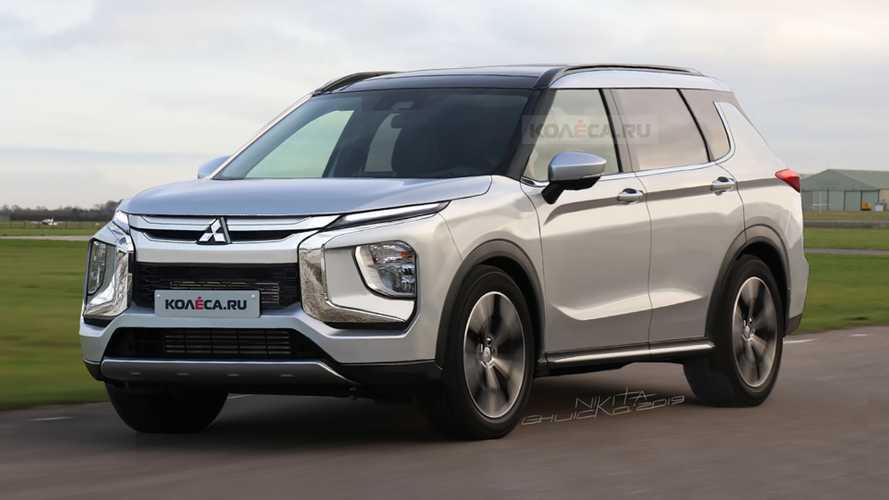 It has a busy front-end design.

We won’t see the next-generation Mitsubishi Outlander until sometime next spring. Think New York or Geneva before it supposedly goes on sale next fall. We’ve got time. Spy photos of a camouflaged Mitsubishi Outlander appeared for the first time late last month, so we know Mitsubishi has Plans. While the camouflage hides much of the Outlander’s exterior design details, it cannot hide everything. This has given our colleagues over at Kolesa.ru enough to create two renderings of the next-gen Outlander, and it’s polarizing.

What Else Is Mitsubishi Up To?

The current Outlander already has a busy front-end design, but if the renderings are to be believed, it could get even busier. The next-gen Outlander appears to be an evolution of the crossover’s current design. You can spot that evolution in the Engelberg Tourer concept that debuted earlier this year at the Geneva Motor Show. The silver accents are bolder and more square, now wrapping around the deep headlights. Above are the thin-slit daytime running lights.

Down the side is a deep scallop that creates a design line that runs through the door handles and taillights. The Outlander rendering also features a floating roof, another design element taken from the Engelberg Tourer concept. There’s a design dichotomy between the front and rear, almost as if it were designed by two different teams. Just like the spy photos, the rendering also shows the Outlander without an exhaust pipe – it’s tucked up underneath, though.

Whenever the next-generation Outlander does arrive, it should grow in size over the current model, possibly riding on the same platform as the next Nissan Rogue. Powering it could be the same turbocharged 1.5-liter four-cylinder found in the Mitsubishi Eclipse Cross, which makes 153 horsepower (114 kilowatts). It could make more power if it finds its way under the next Outlander’s hood. Either way, we have months until we see the new crossover. We’ll just have to keep looking at the renderings for now.