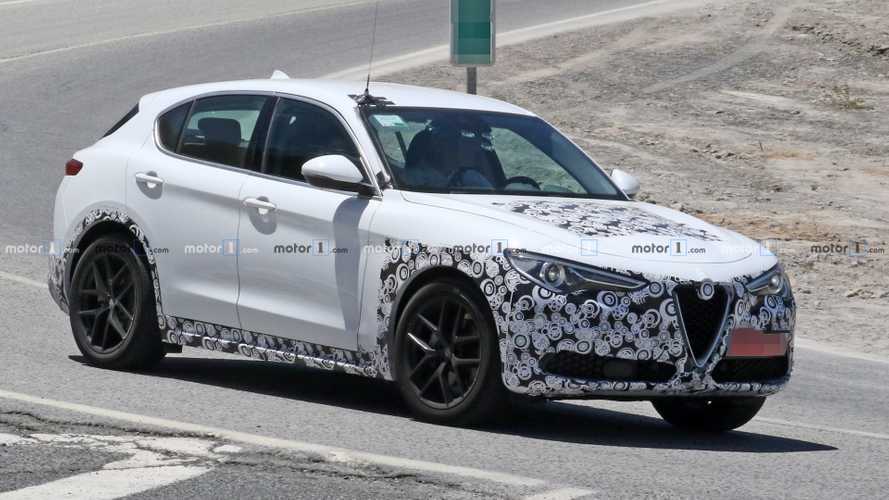 The prototype's odd disguise gives the sensation Alfa Romeo ran out of camouflage when trying to cover the SUV.

It was back in March when our spies caught on camera the Stelvio facelift for the first time and now we’ve received a new batch of images with Alfa Romeo’s sole SUV. Caught enduring hot-weather testing, the prototype was a non-Quadrifoglio model likely with the all-wheel-drive system as the camouflage on the left side of the tailgate probably hides the “Q4” logo.

With most of the disguise slapped onto the front and rear bumpers, that’s where the vast majority of the changes will be implemented. To be honest, the test vehicle appears to be virtually the same as the current Stelvio, which leads us to believe Alfa Romeo was testing future hardware revisions while sticking with the body of the pre-facelift model. For whatever reason, the center of the hood wears disguise, while both corporate badges remain hidden under camo that has a bullseye pattern.

A couple of the adjacent spy shots are showing the Stelvio’s interior, but it’s important to point out you’re not looking at this prototype’s cabin. The images are actually from the previous batch posted earlier this year, and the reason why we’re showing them here once again is to refresh your memory about some of the minor interior tweaks the SUV will be going through.

For example, the center armrest between the seats appears to have a slightly different shape as it doesn’t seem to be pointed towards the passenger seat anymore. The revised Stelvio has the button for the electric parking brake to the left of the gear lever, which by the way, might be a tad shorter. To the right of the shifter, there's either a small storage area or a module for a couple of buttons that were not installed on the test vehicle. Some new trim on the lower center console is noticeable, but you’d have to be a true Alfisti to notice the changes right away.

As it’s the case with the exterior, the cabin might not have all of the final bits and pieces, therefore the production-ready Stelvio facelift could feature a slightly different interior to complement what will likely be minimal changes on the outside.

The SUV’s mid-cycle refresh will come along with a long-wheelbase derivative that was announced by Alfa Romeo back in 2018. Expect the regular Stelvio revision to debut at some point in 2020 when the Italian marque will also take the wraps off the smaller Tonale compact crossover in production guise. Both of them will receive a plug-in hybrid powertrain and level 3 autonomous driving capabilities.

An Updated Stelvio Is Planned: