Here Are All The Best Life-Size Lego Vehicles Ever Made

From race cars to campers, everything is better with Lego.

We start with a recent build, and it was a challenging one. The bonkers design of this hot hatchback made it difficult to get the details right, but after 320,000 pieces and 1,300 hours of design and assembly, the Civic came together in glorious fashion. It’s slated to tour Australia throughout 2019.

If the Civic’s curves and flamboyant aero components were merely challenging, capturing the Senna’s sexy hypercar shape using rectangular bricks is downright monumental. This build goes well beyond that, however, with opening doors and a complete interior. It’s also wired up with functional headlights and a sound system that plays a recording of the road car’s twin-turbo V8 when pushing the start button. It took nearly half a million bricks and almost 5,000 hours to build, and you can see it at the 2019 Goodwood Festival of Speed.

Here’s one for the VW bus fans, and this Lego build is definitely a keeper. It was designed and built not by an automaker, but by two individuals and no detail was missed – inside or out. 400,000 bricks came together for the van, which includes a detailed interior with a mini-kitchen that even has pots and pans all made from Lego.

This is probably the Lego build all automotive fans are familiar with, and not just because it faithfully recreates a full-size Bugatti Chiron. It’s literally a dream-come-true for every Lego lover, because you can actually get into this car and drive it. Granted you’ll only be going about 12 mph, but still, it uses actual Lego motors to move. It took no less than 13,438 hours to build, utilizing over 1 million bricks and all kinds of engineering know-how to get literally thousands of moving parts working in harmony. It’s easily the most complex, ambitious Lego project on this list.

When it comes to sheer size, Chevrolet’s Lego Silverado that debuted at the 2019 Detroit Auto Show is the undisputed champion. Faithfully recreated in Trail Boss trim, this Lego model is 20 feet long, 6 feet high, and consists of 334,544 bricks. The Lego supercars on this list are generally heavier than their real-life counterparts, but ironically, this 3,307-pound brick-built Silverado is much lighter than the actual truck.

Even the intense world of Formula 1 isn’t immune to the Lego charm. Ferrari designed and built an epic replica of its SF-70H racer and didn’t hold back one tiny bit on details. Even the complex F1 steering wheel is awash with Lego controls, and the aero components are masterfully shaped considering it’s all done with squareish interlocking bricks. Specifically, 349,911 pieces were used in the build, taking almost 1,600 hours to complete.

The Senna isn’t McLaren’s first foray into the Lego world. At the 2017 Goodwood Festival of Speed, the automaker pulled the covers off a well-done 720S replica. However, the brick supercar wasn’t actually completed – Goodwood attendees were invited to help with the final assembly at the show, and the result was this spectacularly orange supercar consisting of over 267,300 bricks.

We don’t know if Ferrari’s F1 Lego build was the motivation behind Renault’s effort, but we’re glad the French company jumped into the fun. In late 2017 Renault got 600,000 bricks – the vast majority of them yellow – and set about recreating its RS 17 race car. The build wasn’t entirely Lego, with the tires, steering wheel, and seat coming from an actual track-used F1 car. That doesn’t make this project any less awesome.

Thus far, all the full-size Lego recreations we’ve seen mimicked actual cars. This curious Porsche 911 GT3 RS is just as big as the rest, but rather than copy the actual 911 design, this build seeks to supersize the Lego Technic version of the supercar. Found on display at the Mall of Scandinavia in Sweden back in 2016, we never learned who created this work of art or the details behind it, but it’s terrifically awesome in its own way.

A Toyota Camry seems like a rather unassuming machine to recreate in Lego form, but that’s exactly what Toyota of Australia did in early 2018. This sizable sedan consists of over 500,000 bricks and incorporates working lights front and rear. Lego aficionados might recognize designer Ryan McNaught – he’s a noted Lego master and was the man behind this impressive build, which took 900 hours to finish.

You’ve already seen the massive Lego Chevrolet Silverado on this list, but at 17 feet long this Batmobile recreation is a whopper as well. Chevrolet also commissioned this build, which could be the most realistic life-size Lego recreation of them all since it’s based on the Batmobile from 2017’s The Lego Batman Movie. Over 344,000 bricks went into the project and took 1,833 hours to complete.

Would it be too much to ask to see this trailer paired with the Lego VW bus we saw earlier? Built in early 2017, this full-size caravan trailer looks great on the outside but is absolutely incredible inside. Not only does it have a full interior with lights, running water, and a folding bed, but everything from cookware to food is built entirely from Lego. All total there are 215,158 bricks in this project, which took 1,000 hours to create.

Yes, the proportions on this vintage 1964.5 Ford Mustang aren’t quite right, but come on, just look at it. This masterful recreation was commissioned by Southern Ford Dealers and Lego in 2016, and it consists of 194,900 bricks. It’s also wired up with a horn and speakers under the hood, the latter of which emits proper V8 engine sounds synonymous with the famous Pony Car.

Here’s an amazing Lego creation that doesn’t have an exact real-world counterpart. It clearly has a vintage T-bucket vibe, so-named because those classic hot rods were built from old Ford Model Ts. This one doesn’t just look amazing, however, it’s fully drivable with an actual Lego engine that runs on air. It was built by two people – Raul Oaida in Romania and Steve Sammartino in Australia – and according to Steve’s YouTube page (where the above screenshot comes from) it has four orbital engines with 256 pistons. Over 500,000 Lego bricks were used in the build, and flat-out it can reach 30 km/h (19 mph), which sounds slow but could be both thrilling and terrifying in something like this. 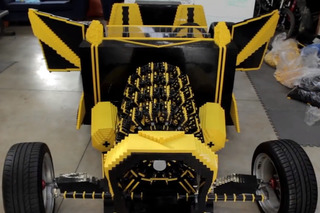 If you look at the title of this slideshow, you’ll notice we said vehicles, and a big bad Harley-Davidson certainly falls into that category. This is another outstanding build from Lego legend Ryan McNaught, built in late 2017 and unveiled at the Brickman Awesome Exhibition in Sydney, Australia. It’s featured on the YouTube channel The Brickman, and though it's the smallest build on this list both in terms of size and bricks used, it still required 60,000 pieces and 190 hours to create.

Back in 2011, Ford jumped on the Lego train with this, a full-size rendition of its Explorer. The project was done as part of the automaker's partnership with the Legoland theme park in Florida, the same place where you’ll see the vintage Mustang featured earlier. The two creations share a similar level of basic detail, but the larger SUV has nearly double the bricks – 380,000 all total – as the blue pony.

We’re fudging the rules here just a bit, because this green 911 – though certainly life-size – isn’t made of Lego bricks. That, it isn’t made of small bricks anyway. This large “Lego” Porsche 911 mirrors the look of the much smaller Lego kit you can buy in stores. As for its construction, that's a mystery but the prevailing theory is that it’s a fiberglass build that mimics the standard pieces used, just scaled up in a big way. Never the less, it’s Lego-themed and very cool, which makes it worthy of mentioning here.

This crafty creation dates all the way back to 2004, and it’s well-done indeed. Volvo showed this Lego SUV at the 2004 New York Auto Show, consisting of 201,076 bricks with most of them being blue. The build was the crux of a fun practical joke played on Legoland California’s general manager back in 2011, who happened to drive a blue Volvo at the time. Despite the quality of the build, however, he wasn’t fooled.

This very blocky recreation of a first-generation BMW X1 dates all the way back to 2009 in the Motor1.com archive. It's not the best auto-themed life-size replica ever made, but it holds a special place on the list because it was built by kids for a children’s charity. It may not be as stylish as other Lego vehicles in this slideshow, but with 165,000 bricks forming the outline of BMW’s first compact crossover, it’s no less impressive.

Ah, the wonderful world of Lego. What is so captivating about sticking small plastic bricks together? To sum it up in one word, it’s all about creativity. Using basic, interlocking geometric shapes, a person can create just about anything, and as we’ve seen time and again, that kind of creative assembly is definitely not the exclusive domain of children. Some ambitious groups and even automakers have recently stepped into the Lego world with fabulous full-scale replicas of real-life cars, one of which can even be driven.

We try to cover every such offering when revealed because we’re total Lego fans, but also because such builds are impressive engineering feats. Building a full-size Lego car that actually looks like the real deal is by no means easy – it requires considerable planning and design work, never mind the thousands of hours for assembly. Looking back through our archives, we found no less than 16 such builds in our files, then found a few more we missed.

You will probably recognize many of these, but some may have slipped under your Lego radar. Jump into the slideshow above for a refresher on some of the coolest full-size Lego vehicles ever created.

The Latest From Lego: