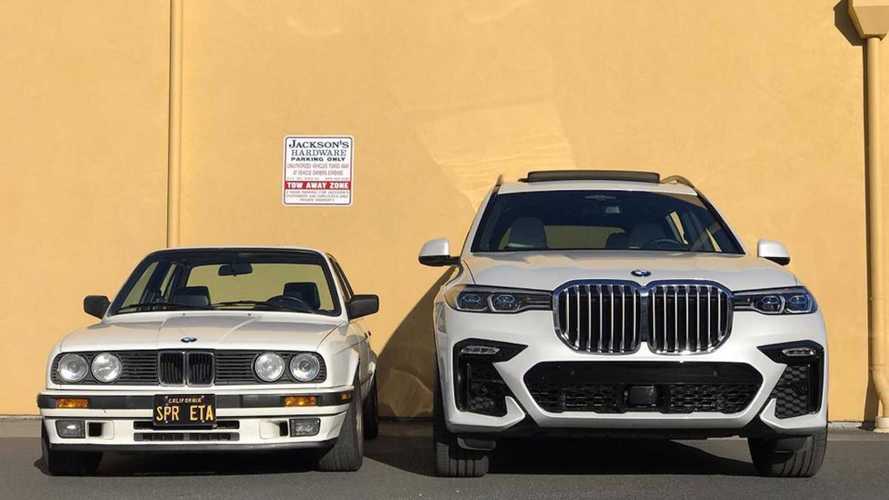 We know the grille is big. We just didn't know it was this big.

The BMW X7 grille – the very controversial car part that united the world in laughter. From the concept up to the production version of the seven-seater SUV, the gigantic grille stuck out like a sore thumb. And people just can't go, despite the X7's outstanding power figures and positive reviews from several automotive journalists.

But just how big the X7 grille really is? Jason Cammisa from Road & Track has found a way to demonstrate its enormity on an Instagram post.

In the video above and the photos that come with the social media post, you could see that Cammisa fit the X7's grille onto a 3 Series E30 and vice versa. It was a hilarious bit, and it clearly shows how far BMW grilles have become.

The E30 came out in the '80s, wearing a boxy styling that's prominent during that time. Its crown was just two tiny six-slat kidney grille that could probably fit one kidney of the X7. Frankly, seeing the E30 wear the X7's crown was just too much.

Beyond The Grille, The BMW X7 Isn't Incomparable:

Kidding aside, the BMW X7 is still a force to be reckoned with. The X7 M50i has just come out last month, featuring BMW's N63 4.4-liter twin-turbo V8 engine that generates 523 horsepower (390 kilowatts) and 553 pound-feet (750 Newton-meters) of torque. With these numbers, the X7 is now the Bavarian marque's most powerful SUV, along with the X5 M50i.

Apart from the power increase from their predecessors, the X5 M50i and X7 M50i also got suspension tweaks from M Performance. The bushings, spring, and damper settings are all tuned to complement the outstanding power figures, as well.