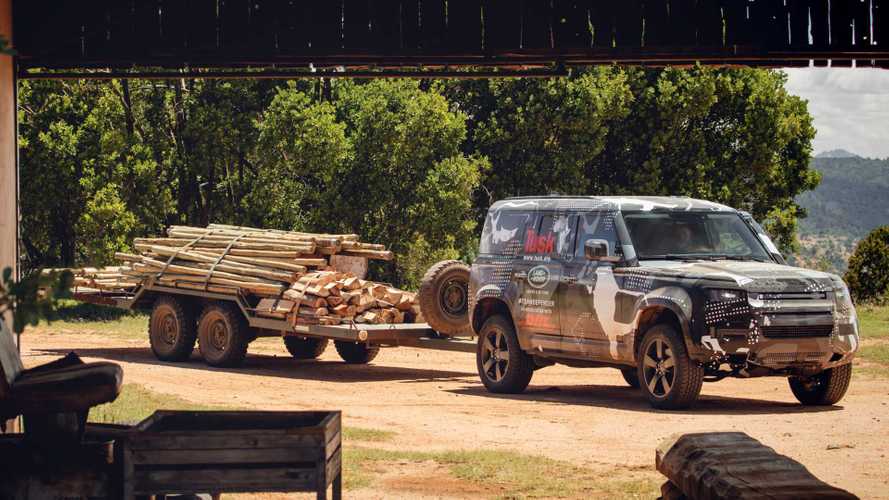 The prototype was modified to integrate a raised air intake.

As we are inching closer to its highly anticipated reveal, the new Defender is being featured in more and more teasers by Land Rover to generate more buzz. It’s not your typical shadowy teaser image as the adjacent photo gallery was shot in Africa where a near-production prototype had to go through some serious hurdles in Kenya. Together with British non-profit organization Tusk Trust, the resurrected off-road SUV was used across the 14,000-hectare Borana Conservancy by wildlife managers to support conservation operations.

From tracking radio-collared lions and transporting supplies to tackling difficult terrains while pulling heavily loaded trailers, the Defender prototype had to accomplish some rather challenging tasks. Land Rover’s engineers modified the test vehicle to accommodate a built-in raised air intake, while the camouflage pattern was carefully designed to match the surroundings.

The aforementioned Borana Conservancy has everything from muddy river banks to thick forests, but these weren’t much of an issue for the Defender as the SUV was up to the job and also had no issues climbing steep rocky inclines and going through deeply rutted tracks. Say what you will about the Defender, but no one can question its off-road chops.

Approximately two and a half years have passed since the last old-school Defender was built at the factory in Solihull, and we’re now just a few months away from its completely new successor. Land Rover will allegedly unveil the next-gen model in September and will have the iconic off-roader on sale in the United States.

Like its predecessor, the revamped Defender will spawn a great variety of derivatives, from barebones off-roaders to luxurious and powerful versions in a bid to lure in a wider clientele. We’ve spotted it multiple times in short- and long-wheelbase configurations, but we’ve also been hearing rumors of a pickup truck with a single cab setup among other versions.