808-HP Chrysler PT Cruiser Laughs In The Face Of Haters 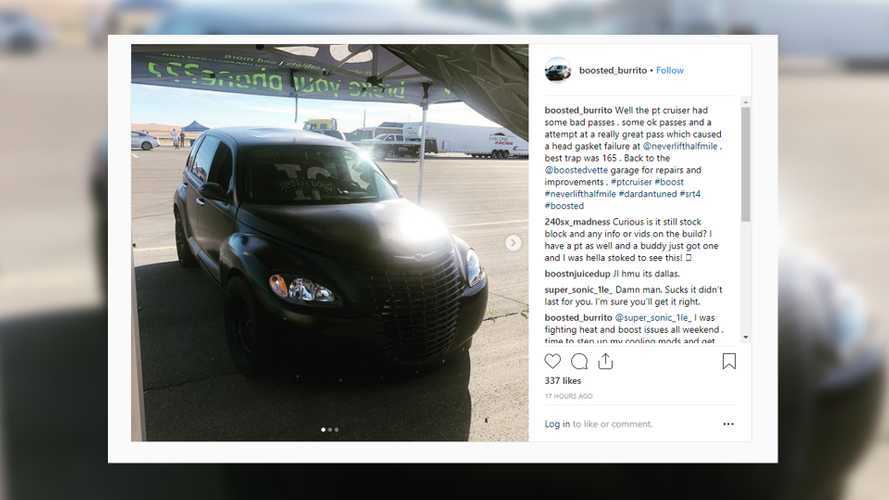 The PT Cruiser may not be remembered as a performance car, but this one is sure to leave an impression.

To some, the Chrysler PT Cruiser is a laughable throwback to the retro styling trend that was all the rage in the pre-recession early 2000s. What people often forget, though, is that there was a performance variant, the PT Cruiser GT, powered by a version of the 2.4 liter turbo four cylinder found in the Dodge Neon SRT-4.

The PT Cruiser GT was rated at 215 horsepower (later 230), which was fairly respectable in its day. Even better, it was available with a five-speed stick. In stock form, it was capable of running the quarter mile in 15.7 seconds, which, again, was not bad at all when it was new.

Renault Kangoo With Megane RS Engine Is The Mother Of Sleepers
⠀

Lexus IS300 Sleeper Packs More Power Than A Bugatti Veyron

The Drive, like us, follows 1320Video, and spotted this tough-looking flat black PT Cruiser when they shared it on Facebook. While it's apparent from the photos that this isn't your granddad's PT Cruiser, we were shocked to find out that this PT Cruiser is putting down a jaw-dropping 808 horsepower to the front wheels.

That's accomplished by a Garrett GT35R turbocharger pushing 36 pounds of boost. Obviously, the fuel system was substantially upgraded to accommodate the 2.4 liter's newfound fueling needs, and upgrades include 2,000cc injectors feeding the engine a steady diet of E85. Naturally, the engine runs on custom software.

Incredibly, this PT Cruiser retains its stock Getrag five-speed transmission. That either means that the driver, who goes by the name boosted_burrito on Instagram, is very careful, or that this is the world's strongest stock transmission.

With a previous tune, this PT Cruiser managed an incredible 165.9 miles per hour in the half mile. That might make it the fastest PT Cruiser in the world, and proves beyond any reasonable doubt that you can't judge a book by its cover.