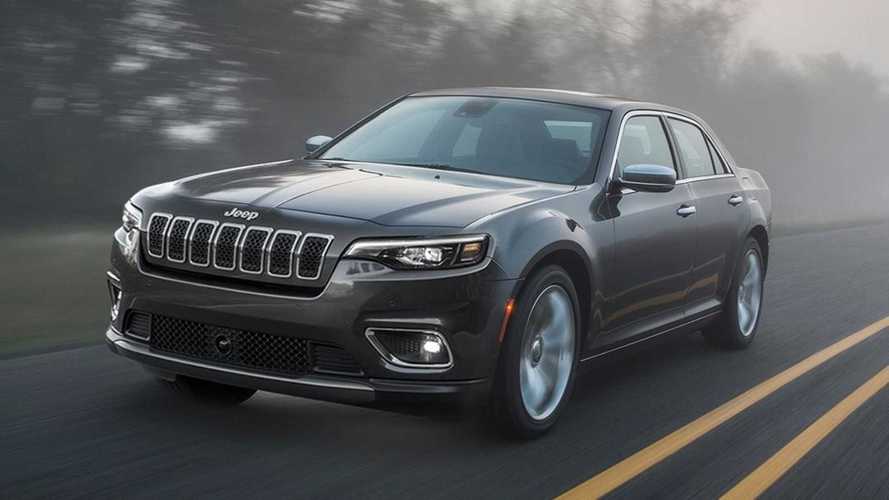 A Jeep sedan might actually be a big seller.

Jeep knows how to build an SUV, obviously. It knows how to build pretty good trucks, too, as we found out in our time with the new Gladiator. But FCA leaves its car building to brands like Chrysler, Dodge, Alfa Romeo, and Fiat exclusively. If Jeep did build a sedan, though – for whatever reason – it’d probably look something like this.

Unfortunately, Toyota HiAce Convertible Is For Australia Only

Jeep Middle East posted an image of a low-slung Jeep four-door on its official Facebook page. The cleverly named "2019 Jeep Sedan" is obviously an April Fool’s Day joke. It looks like graphic designers took a Chrysler 300 and carefully crafted a Jeep Cherokee face on top of it – seven-slat grille and all. But we don’t hate it.

Something about the Jeep face together with the sculpted Chrysler 300 body works. It maintains its SUV-like toughness up front, yet seamlessly forms into Chrysler’s sculpted styling out back. And if we had to guess, this appears to be the base model; a rugged, Volvo S60 Cross Country-like Trailhawk model with plastic fenders and a lift would make the already interesting render even more enticing to Jeep buyers.

A Jeep sedan probably won’t happen, no matter how much we petition. Expect more SUVs from the brand in the next decade. By this time next year, Jeep will have three full-size SUVs (including the new Grand Wagoneer), as well as a plug-in Wrangler. But another SUV-centric brand could build a road car.

Land Rover (no, this isn’t another April Fool’s joke) could offer a luxed-up sedan or Range Rover-inspired wagon, dubbed "Road Rover," by 2020. An Autocar report from last year suggests Land Rover will move away from its SUV-exclusive image and potentially explore the road-car space.

Take a look at the Jeep Sedan and Range Rover Road Rover side-by-side: