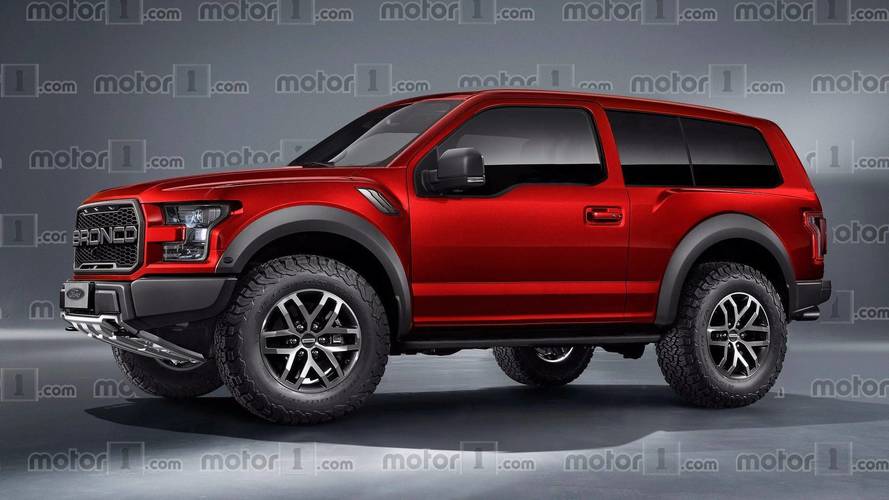 The Baby Bronco and unibody pickup are on the way, too.

During a recent dealer meeting, the Blue Oval gave the sellers more details about the revived Ford Bronco, including plans to offer two- and four-door versions. The SUV reportedly looked retro by taking elements from the original like a rectangular grille, round headlights, and a stamped Bronco emblem on the front, according to people who saw the vehicle speaking with Automotive News.

Ford Applies For Scout And Bronco Scout Trademarks In The U.S.
⠀

This Classic Ford Bronco Is Fully Electric And To Die For

Ford will position the new Bronco as a Jeep Wrangler rival. It'll feature rugged elements like a removable hard top. Owners will also be able to take off the doors, and there will be room to store them in the rear cargo area, according to Automotive News.

The Bronco reportedly rides on a body-on-frame chassis with solid axles at both ends. Power allegedly comes from one of Ford's EcoBoost turbocharged engines with an output of roughly 325 horsepower (242 kilowatts). While most buyers would likely opt for an automatic gearbox, the Blue Oval also purportedly intends to offer a seven-speed manual for the SUV.

The dealer representatives also got the chance to see Ford's smaller off-roader and the electric, Mustang-inspired crossover. The automaker also reiterated plans to build a compact pickup on a unibody chassis – reportedly sharing a platform with the latest Ford Focus.

The new Bronco, the smaller so-called Baby Bronco, and the unibody pickup reportedly share a rugged styling aesthetic that should set them apart from the sleeker crossovers that are more common on the market. Dealers were very happy with what they saw, according to the folks that Automotive News spoke with.

Ford's current product plan is to launch the Baby Bronco first in 2020 and for standard Bronco to arrive a few months later. The little pickup hits the market last by going on sale no sooner than 2021.