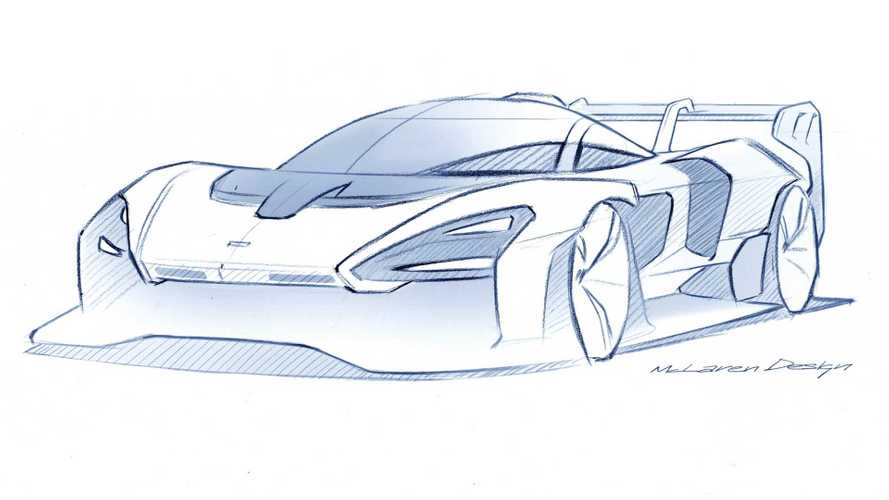 The McLaren Senna GTR looks set for production after the Woking manufacturer confirmed some technical details of the track-only supercar. It was first unveiled at the Geneva Motor Show earlier this year, but only in concept form; although it was widely assumed that a small run would end up being produced.

Now we know for sure that will be the case, with the car beginning dynamic testing later this month. It will be powered by the same 4.0-litre twin-turbo V8 used by every other McLaren road and track car outside of its Formula 1 team, but this time it will produce 813 bhp – up from the 789 bhp of the Senna road car, and 590 lb-ft of torque (the same as the road car). We don't know how much it will weigh yet, and maybe McLaren doesn't either, but it has told us that the Senna GTR will produce 1,000 kg of downforce.

Because it's a track car, the Senna GTR will have something of a basic interior, even more so than the track-focused road car. All of the airbags will be removed, along with the central infotainment screen and folding driver display. Added will be a new race-style steering wheel with integrated gearshift paddles, and a radar-assisted, rear collision avoidance system. Air-conditioning will be carried over from the road car, however, and will be fitted as standard – because if you're a rich person having fun, you want to be comfortable, of course.

The active aerodynamic features of the road car will remain – they wouldn't be allowed on a racing car, but seeing as though this is a track toy, there is no rule book as such.

The car will also have conventional double wishbone suspension, with the geometry, springs, dampers and anti-roll bars all tracing their lineage back to McLaren’s 650S and upcoming 720S GT3 customer racing cars. Pirelli slick race tires will be fitted to maximize grip, while a race-derived braking system is expected to deliver 20 percent greater maximum deceleration, with resulting forces in excess of 3G.

When McLaren unveiled the concept Senna GTR back in March, it did so to test the waters and find out how many people would be interested in buying one. At the time it said that only 75 would be made, if it were to build it. That production number has been retained for the real thing, and every single one has already been sold for an eye-watering price of £1.1 million ($1.43M) apiece.

The McLaren Senna GTR, a track-only hypercar that debuted in concept form at the Geneva International Motor Show in March 2018 and sold-out in the same month, begins dynamic testing this month with highlights of its technical specification newly confirmed – not least that it will generate 1000kg of downforce and have race-bred suspension developed from the system used in McLaren’s GT3 programme.

The Senna GTR is an even more extreme version of the road-legal McLaren Senna currently being built at the McLaren Production Centre in Woking, Surrey, UK.  McLaren tested demand for the track-only, left-hand-drive only car on its introduction at Geneva, saying that up to 75 would be produced. Many more expressions of interest were received, but the company has confirmed that only 75 will be available, all of which are already allocated.  Deliveries are expected to begin from September 2019 when production of the road-legal McLaren Senna is complete.

The development prototypes that begin testing this month will initially use modified Senna road car bodywork.  The final Senna GTR shape – shown in simple form in a new design sketch – will be based around a chassis with wider track front and rear and centre-lock wheels.  The carbon fibre body has new, wider fenders, a larger front splitter and rear diffuser and repositioned active rear wing; these last two elements combining to improve aero-efficiency by ‘coupling’ the wing to the airflow from the diffuser, enabling greater – and more accessible – downforce at lower speeds.  Optimised aerodynamic performance in yaw improves cornering stability, while reduction in pitch sensitivity leads to even greater braking stability.

The lightweight but incredibly strong carbon fibre McLaren Monocage at the heart of each McLaren Senna GTR epitomises McLaren’s approach to weight reduction, a philosophy which is taken even further with the new GTR.  A pared-back interior sees all airbags removed, as well as the infotainment central screen and folding driver display found in the road car, while a new, race-style steering wheel with integrated gearshift controls replaces the road-legal component.  Air-conditioning is an exception to the rule of absolute minimalism – remaining standard-fit – and a radar-assisted, rear collision avoidance system is also standard.

A final vehicle weight is still to be declared, but the GTR will weigh less than the road-going Senna. In combination with the 825PS output of the 4.0-litre twin-turbocharged V8 engine – an increase of 25PS over the road-legal Senna – this will see the power-to-weight ratio comfortably exceed that of the road car.  Together with torque of up to 800Nm, the result will be astonishing levels of response and performance.

The Senna GTR retains the active aerodynamics of the road-legal car – an advantage that would not be permissible in a homologated race car – which is a major enabler in generating the 1,000kg of downforce.  The car has conventional double wishbone suspension, with the geometry, springs, dampers and anti-roll bars having been developed from the system engineered for McLaren’s GT3 customer racing programme.  Pirelli slick race tyres maximise dynamic performance and the braking system – introduced in the Senna road car and also race-derived – is projected to deliver 20% greater maximum deceleration, with resulting forces in excess of 3g.