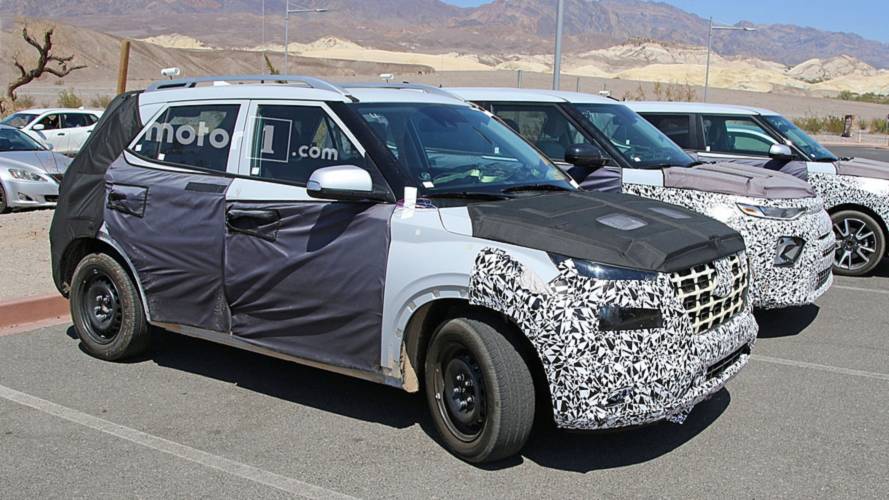 Death Valley National Park isn’t just a popular stop for tourists out and about in the California desert. Automakers seeking real-world conditions for hot-weather testing flock to the area in summer, and it is definitely hot. Death Valley recently set a record high of 127 degrees Fahrenheit  (53 degrees Celsius), so this curious Hyundai SUV spied at the Furnace Creek Visitor Center near the park’s entrance is certainly getting a trial-by-fire.

It Has A Name:

We don’t know much about this pint-sized SUV just yet, but there are a few things to share. For starters, it’s testing with the new Kia Soul and that gives us a great idea of just how small this new offering is. From the back, the Soul looks considerably larger though we suspect the camera angle and the Soul’s bulky rear camo has something to do with that. Our sources tell us it’s based on the Kia Stonic, and we can certainly spot similarities in the profile. For that fact, we also see plenty of similarities to the Hyundai Kona, which itself is a sibling to the Stonic.

The front clip looks like it could be a dead ringer for the Kona, but in profile we can see the A- and C-pillars are a bit more squared off, hence the status of SUV instead of small crossover. Our sources tell us this vehicle could replace the Hyundai Accent in the U.S. market, where buyers continue to abandon sedans and small hatchbacks for SUVs and crossovers. The Kona seems like a better fit for that, but with two small offerings from the automaker tugging at the heartstrings of SUV and crossover shoppers, Hyundai should have the bases well covered in the compact segment. Power will likely be similar to the Kona's modest four-cylinder engine choices; front-wheel drive should be the standard driveline setup with all-wheel drive optional.

We don’t know the name of this new offering just yet, and with camouflage still heavy on all sides we likely won’t see a reveal until late next year as a 2020 model.