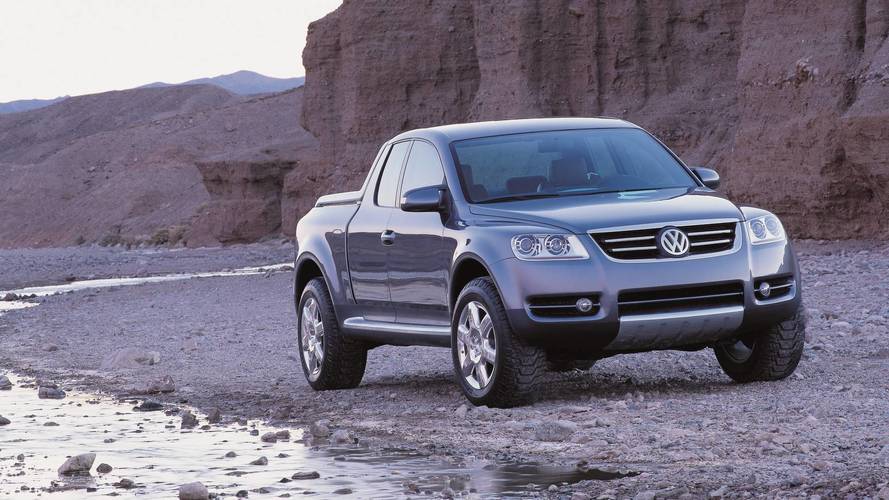 A look back at the utilitarian roots of the Touareg.

With a little over a week until the debut of the third-generation VW Touareg, we thought it would be the right time to have a look back at the luxury SUV’s more utilitarian origins.

Roughly two years before the launch of the original Touareg, Volkswagen brought to the Detroit Auto Show a conceptual pickup truck that ticked all the right boxes: four-wheel drive, mountain-moving amount of torque, double wishbone suspension, and a generous ground clearance of up to 15.4 inches or 390 millimeters. It combined the ruggedness you’d come to expect from a double cab pickup with a fairly posh interior just about as fancy as the Touareg’s. As a matter of fact, VW described the AAC back in the day as a mélange between the capabilities of a pickup truck and the “luxury of a top-class sedan.”

See other VWs from the series:

Being a concept, VW decided to experiment by giving the AAC suicide doors, which not only looked interesting on this body style, but also granted an easy entrance into the cabin for the two passengers sitting in the back. Since it was envisioned to tackle difficult roads, the concept received a lot of underbody protection and a set of chunky Pirelli Scorpion all-terrain tires. The roll bar at the back further contributed to the pickup truck’s ruggedness, as did the jacked-up air suspension with three selectable settings with a difference between the lowest and highest configuration of 4.33 inches (110 mm).

It wasn’t until about a decade later when VW introduced its own upscale pickup truck in the shape of the Amarok, which nowadays has to battle the Nissan Navara-derived X-Class from Mercedes, another utilitarian vehicle with premium aspirations. The name “Amarok” was registered in November 2017 with the United States Patent and Trademark Office (USPTO), but that doesn’t necessarily mean the pickup truck is heading stateside. Speaking of forbidden fruits from VW, the new Touareg won't be coming to the U.S. of A.