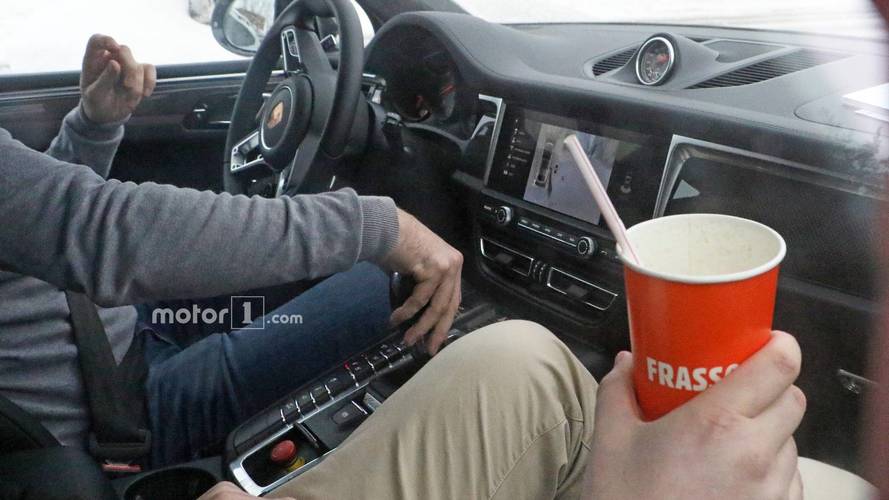 The central air vents have been moved below to make room for the bigger display.

Outselling the 911 by a three-to-one margin in 2017, the Macan is by far Porsche’s best-selling model. Deliveries rose by two percent to more than 97,000 units last year, so it’s safe to say the impending mid-cycle refresh is a big deal for the company seeing as how the sporty crossover is a veritable cash cow. Our spies caught on camera a near-production prototype of the facelifted version, sporting mildly revised headlights and taillights hiding underneath stickers applied to throw us off by suggesting the vehicle had the same lighting clusters as the outgoing Macan.

Looking at the back of the car, we also notice a black tape applied onto the tailgate, between the taillights, which may or may not be a sign the 2019 Macan will get a full-width light strip like the bigger Cayenne and the latest Panamera. We’ll have to wait for the body-colored camo to come off to find out whether that’s the case.

It’s the interior that draws the attention thanks to its modified dashboard with a bigger infotainment system. Wider than what the current Macan offers, the enlarged screen (likely measuring 12.3 inches) required moving the central air vents lower on the center console instead of flanking the display like they do now. These have a completely new shape, switching from a vertical configuration to a horizontal arrangement.

The center stack still incorporates an abundance of physical buttons whereas the more expensive Cayenne has switched to touch-sensitive controls for its new iteration, with a significantly less cluttered interior.

Elsewhere, Porsche’s engineers will likely get the latest crop of gasoline engines from the Panamera, which is expected to lend its hybrid powertrain for a partially electrified Macan with hardware adapted from the 4 E-Hybrid sedan.

Porsche hasn’t said a word about when it will unveil its updated crossover, but we might get to see it early March in Geneva or at the end of the same month in New York.