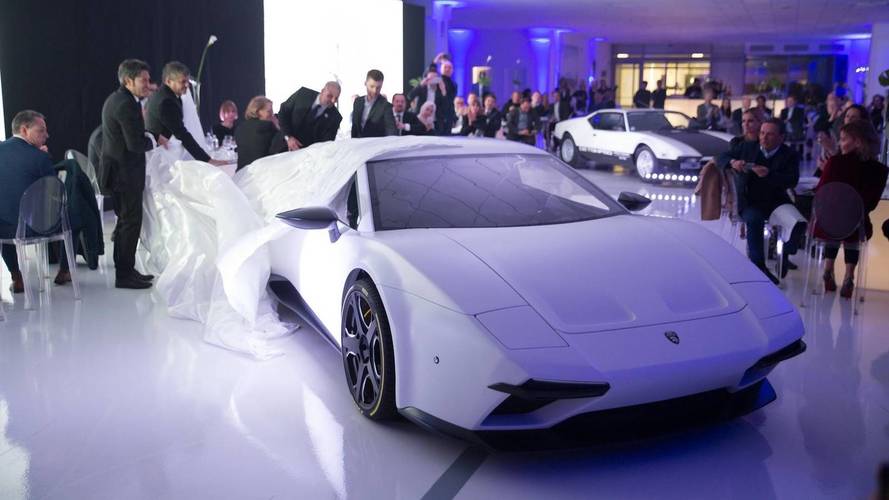 After the release of computer renderings, the prototype of Project Panther, which emulates the classic De Tomaso Pantera, has been revealed at the Modena HQ

Ares Design has revealed the fullsize model of its Project Panther – the modern-day reimagining of the De Tomaso Pantera – at a VIP dinner at its new HQ in Modena, Italy.

This follows the release late last year of computer renderings of the car, which is based on a Lamborghini Huracan but with completely new bodywork designed and created by Ares Design, the company formed in 2013 by ex-Lotus CEO Dany Bahar.

At the unveiling, the Panther was sited alongside an original Pantera. The new car is significantly wider than the iconic De Tomaso, but its wheelbase is just 12 centimeters (4.7 inches) longer – one of the reasons why the Huracan was chosen as the donor car. The Panther has ended up just 10 cm (4 inches) longer than the original; 4 cm (1.6 inches) at the front and 6 cm (2.4 inches) longer at the rear, which has allowed the designers to retain the characteristic Pantera upswept rear profile.

See the numerous other projects the company is working on:

The new bodywork was designed to emulate the shape of the 1970s Pantera while retaining the aerodynamic and structural properties of the Lamborghini donor. To achieve the correct profile, the A-pillar had to be moved back by 10 cm (4 inches) to give a more authentic rake to the windscreen. A roll cage has been installed within the structure to retain the strength – in fact torsional rigidity is expected to be 10 percent higher – and allow more headroom for occupants.

The Pantera’s characteristic side air intakes have been mimicked in the Panther, while the muscular wheel arches are even more prominent in the new car, which also retains pop-up headlights, albeit as low-profile LED units. All the new panels are created in-house by Ares Design in carbon fiber.

Inside, the Panther uses the basis of the Lamborghini interior, keeping the positions of the majors components and the seats themselves, but it's remodeled and retrimmed in homage to the original Pantera, particularly in the shape of the instruments – square pods in the original – and the large square vents in the center of the dashboard, as well as the leather stitching around the fascia. It’s trimmed in a mix of carbon fiber, leather and Alcantara.

"We really like retro design languages but we also like technologies from 2017 and 2018,' says Dany Bahar (seen below, with the prototype. 'For the Panther, the customer even gave us his car [the original Pantera] for inspiration."

"We took a lot of inspiration from the Pantera," adds design chief Mihai Panaitescu. "We wanted to recreate the Pantera with the same amount of feeling as the original but with none of the problems. The customer doesn't have to think about anything, he just gets in and drives."

The Pantera will be offered with a performance upgrade package, including a titanium exhaust that copies the style of the original’s. Power is said to be between 640 and 660 hp, and the finished car is expected to be 100 kilograms (220 pounds) lighter than the donor Lamborghini.

This is the first car from Ares Design’s "Bespoke Creations" service, though the company has already sold several other modified cars, including Mercedes G-Class and Bentley Mulsannes. The company uses computer modelling and 3D printing rather than traditional clay modelling, to keep timescales short and reduce costs, and the cars are built and trimmed in-house at its 18,000 square-meter (193,750 square-feet) HQ – a remodeled former Fiat dealership – on the outskirts of Modena.

Aerodynamics are determinded using computational fluid dynamics (CFD) and the cars are built to conform with the German TÜV standards, as well as local (to the customer) regulations. Eight inspections are carried out by the TÜV throughout the build process to ensure compliance; with this and by retaining the original underpinnings of the donor cars, full crash testing and homologation isn't required.