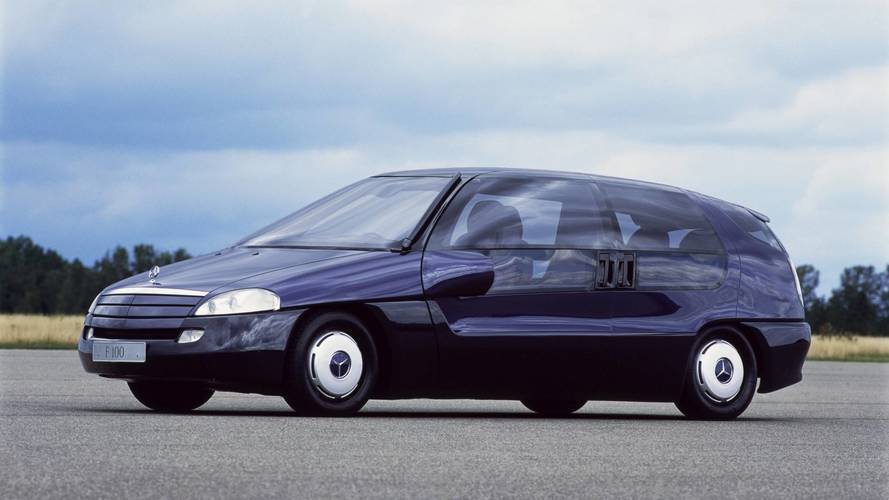 With cruise control, xenon headlights, voice recognition, and a lane keeping assistant, the F100 was a technological tour de force.

Ok, so it may not be as pretty as the 300 SL, but the F100 wasn’t created to win beauty pageants. The main idea behind the concept was to cram as much technology as possible.

Featuring a central driver’s seat akin to the legendary McLaren F1 supercar and another of our forgotten concepts, the BMW Z13, the F100 was a highly unusual MPV equipped with a lot of features that were quite special back in the day. In fact, some of the goodies are still not available as standard on a lot of today’s production cars. These include electric seats, satellite navigation, electrically adjustable steering wheel, tire pressure monitoring system, and a key card.

It also had xenon headlights (which by the way look like those of the S-Class W221), a technology which went on to find its way in a road-going car for the first time later that year with the BMW 7 Series. Previewing the connected car that is slowly taking over the automotive world, the F100 came with a voice-controlled telephone and even had a reversing camera. If that wasn’t impressive enough, Mercedes managed to incorporate a mobile fax and a personal computer.

Check out other Mercedes concepts from the series:

To feed the extra tech with energy, the concept featured solar cells built into the roof spanning across a nearly two-square-meter surface and providing up to 100 watts. It certainly needed the extra juice as even the touch-operated front doors were electrically powered, granting access to the five bucket seats inside arranged in a peculiar 1+2+2 layout.

It wouldn’t have been a proper research vehicle without a generous array of groundbreaking technologies. Mercedes installed the forebears of the automatic lane keeping and blind spot systems, along with autonomous intelligent cruise control working together with front- and rear-mounted radars.

Last but not least, the F100 was engineered with a front-wheel-drive platform, much like the four-in-one 1995 Vario Research Car we talked about last year in the weekly Concept We Forgot series. It wasn’t until 1997 when the first FWD production car carrying the three-pointed star badge was launched with the arrival of the A-Class W168.

Oh, and did we mention the internal combustion engine ran on hydrogen? Yes, Mercedes' engineers experimented with a few powertrain solutions and this unusual setup was one of them.