The company claims one of these could serve a military for 50 years.

The necessities of modern war have forced combat vehicles to get sophisticated, like the massive JLTV that replaces the venerable Humvee. However, Dr. Juri E. Postnikov thinks that there’s an alternative. His Partisan One concept eschews cutting-edge tech for the ability to put huge numbers of them on the road in a quick period of time. The goal is to be the “best car for the world's worst roads." 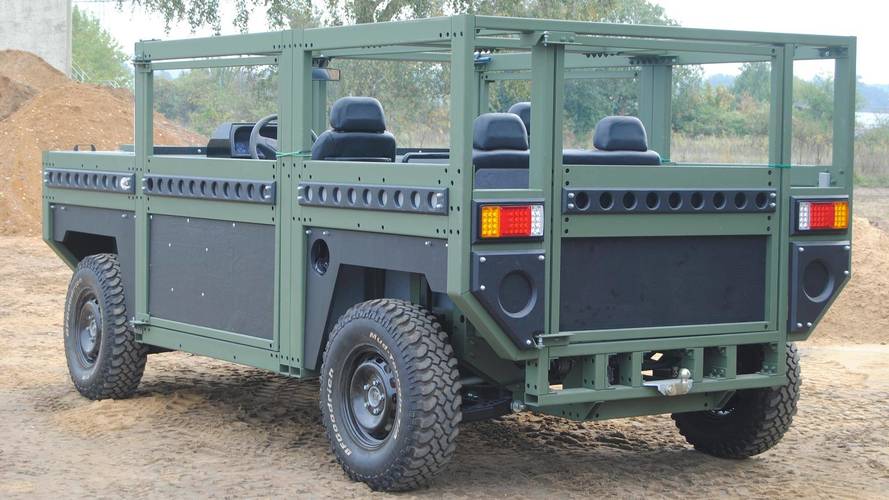 Dr. Postnikov says that the design is deliberately primitive. The Partisan One’s shape takes the two-box design to its logical extreme with an ultra angular front end and large rectangle for the passenger compartment. There’s not a single curvy line visible on the SUV.

As a military vehicle, survivability is a major concern. The circular recesses along the exterior act as points for attaching armor plates. There would also be locations underneath the vehicle for fitting V-shaped armor as protection against explosives in the ground.

Underneath the angular body panels, the Partisan One would use a high-strength steel space frame and wishbone suspension. The company seems rather unsure about the engine, though. The firm’s release offers the “possibility of installing various power units,” including powerplants with a transverse or longitudinal layout. 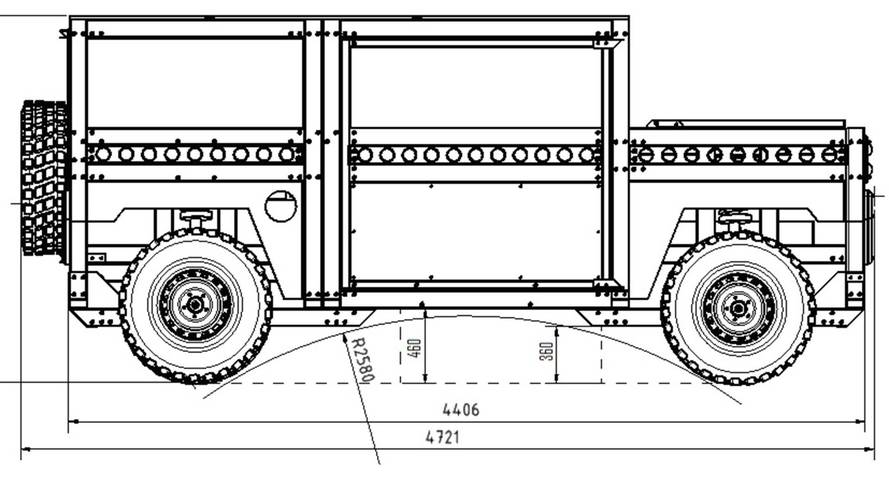 The thinking behind creating this box on wheels is that it would be an incredibly simple to build. Dr. Postnikov also imagines a variety of body layouts, including a short-wheelbase three-door, long-wheelbase five-door, and pickup. Conceivably, 6x6 and 8x8 variants would be possible, too. An army could fit knockdown kits for 5 of the vehicles in standard shipping container and then deliver the vehicles where the force needs them the most.

For a vehicle not yet in production, the firm makes some lofty claims about the Partisan One’s longevity. For example, the company believes that these SUVs could serve in an army for “50 years or more, without requiring a replacement.” In addition, “we provide a 100-year warranty on the entire car in addition to its wearing parts.”

A large military like the United States likely wouldn’t have much use for a simple vehicle like the Partisan One, but it might have a place in the armed forces of a tiny nation. Still, until more details emerge, take seeing this simple SUV on the battlefield with a grain of salt.

In the automobile skyline of Germany, a new brand PARTISAN MOTORS has appeared.

A well-known Russian engineer and designer from Germany, Dr. Juri Postnikov, who caught GAZ on the "Comtrans-2017" in borrowing his developments, presented to the general public a universal army SUV "PARTISAN ONE", created by his company PARTISAN MOTORS.

The presented car "PARTISAN ONE" stands out very strongly against the background of its licked and glazed brethren, and contrasts sharply with them not only with its large size and structure, but first of all with its square shapes, straight lines of body contours and deliberate primitivism of appearance, as if the absence of any design. But the lack of design is also a design!

The apparent simplicity of Partizan's appearance is the result of absolutely conscious and calculated steps to the design, which is called to be the best car for the world's worst roads.

The strong elements of the load-bearing spatial frame made of high-strength steel and the elements of their joints with bolt heads looking like on the rivets at the joints of the jeans trousers are exposed to the display, determined by their functionality during driving in the hardest road conditions, maximum maintainability in the field, and manufacturability.

Today, a huge number of cars with a variety of properties, technical characteristics, type of drives, design and equipment are produced. The satiated buyer can choose any performance and level of luxury. There are more and more new exquisites that you will not surprise anyone.

We are not against progress and luxury, even though these designs will remain pleasing to the eye and shake our imagination about the limits of the possible and reasonable. But as we were taught, everything develops in a spiral, repeating on each new turn some features of the spaced one for a period.

Obviously, it's time to return to the values that were in demand in the automobile designs of the early 20th century, when there were not many cars, and asphalt roads did not exist, and each trip was like an adventurous journey: strength, functionality, big wheels, maintainability, long life.

Such requirements have remained for modern military SUVs that stand apart in the modern automobile world, do not follow fashion after fashion, stand on the job for decades, only modifying.

It is the military SUV, first of all, that our "PARTISAN ONE" is conceived. We have created a truly robust car, which has a serious safety margin that can overcome any obstacles on the battlefield and withstand all the wartime hardships.

In peacetime, one of the most important requirements, along with those enumerated above, to military vehicles - mass and affordable price, is lost. For military parades, a couple of hundred steep and super-expensive off-road monsters are enough. Their price here is not only not important, moreover, the more expensive, the better and more profitable.

Everything changes in conditions of military operations, where such an SUV is just an expendable material, besides, alas, with a very modest life time on the battlefield, counted in minutes. This material is needed a lot, and therefore it must be produced quickly, in large quantities, various modifications and at a very reasonable price. Real war actions - an event economically very expensive in the modern world.

The concept of "PARTISAN ONE" - universal army SUV is not only the drawings and the presented running layout. This is a whole complex of interrelated design, technological, organizational, industrial and logistics actions called to give the army a single unified transport platform that will allow producing and delivering a whole line of cars from a light 4x4 off-road vehicle to an 8x8 armored personnel carrier.

Special features of the design with a spatial load-bearing power frame made of high-strength steel profiles of a closed section make it possible to realize almost a bus internal space of an SUV, the maximum possible protection of passengers, and absolutely flat floor without a protruding tunnel in the middle, by the way, for the first time in this segment, provides ease of an easy getting on and off equipped fighters inside the car.

A simple and quick installation of external armored armor plates on the supporting power skeleton makes it possible to realize the maximum possible class of ballistic protection for the crew. The design of the double bottom is adapted for installation of an anti-mine V-shaped screen, which reliably protects both the crew and all vital organs of the car itself.

The impressive design of the independent suspension on the wishbones provides high ride smoothness, speed and maneuverability.

Organization of the layout of the engine compartment and transmission tunnels implies the possibility of installing various power units and their layout solutions. The engine can be installed both along and across the body. The main driving bridge can be either front, with a viscous coupling connected, or a transfer box, rear, as well as vice versa. A permanent full drive of both bridges can also be realized.

The modern diesel engine, coupled with the fuel tanks of large capacity, provides a long range of about 1000 - 1500 km.

The resources of the car are provide with a built-in structural safety factor and the use of reliable large-scale components when assembling it.

Structurally, initially this car has the possibility of its multiple modernization over time and the emergence of new requirements and standards for military equipment of this kind. Such a car can be in the army, having a planned upgrade, 50 years or more, without requiring a replacement, allowing you to save resources and budget.

The car "PARTISAN ONE" is conceived in such a way that its production can be set up in the shortest time anywhere in the world literally "from the wheels" with a very fast output to high circulation with stable product quality. For example, operations in the production of its body consist of only two technological re-operations: laser cutting of steel profiles with simultaneous piercing holes in them and the subsequent of zinc plating by immersion in a bath with zinc melt. Such an anti-corrosion treatment means an almost perpetual construction

The car can be delivered to the destination in the form of lightweight assembly kits - one standard 20-foot sea container will hold 5 sets instead of one fully assembled car. This fivefold multiplication factor is extremely important, when conditions require instantaneous increase in the supply of equipment to the zone of its application.

As a rule, cars that have proved their suitability for heavy military service in real conditions, become in demand and occupy a prominent place on the civilian.

In civilian life, our "PARTISAN ONE", in addition to the intirely peaceful specialties of the SUV as a vehicle for building areas, farms and forestries - it is designed in such a way that it can easily accommodate two Europallets in the short-wheeled three-door version, extremely interesting for extreme off-road tourism and hunting , where its strength, capacity and autonomy will come at the right time.

The car "PARTISAN ONE" can be, besides a complete set with a traditional internal combustion engine, made with any other - fully electric, hybrid. The concept incorporated in it will allow to make the car literally with any size, for specific tasks

In addition to the short-wheelbase three-door and long-span five-door versions, pickup trucks with single and double cabins and different bases, versions of 6x6 and eight-wheel-drive four-wheel drive chassis for special road conditions have been developed.

Many rich people are very rational. They ask themselves the question of the expediency of spending and generally the rationality of using the resources at their disposal.

Perhaps, for the most well-off customers, this car, due to its features of structure, design and technical qualities will be attractive, as for people who know how to understand the true values. This car can even be handed by inheritance, along with a collection of expensive hunting trunks. Moreover, we provide a 100-year warranty on the entire car in addition to its wearing parts.