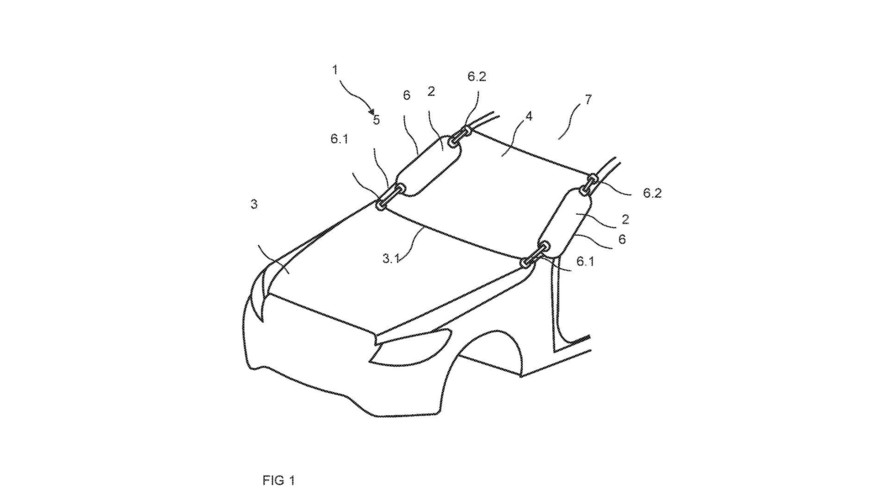 The airbags pop out and the hood lifts up in the event of an accident.

No one wants to be hit by a car, but a new patent from Mercedes-Benz parent, Daimler, could make such a collision much more survivable in the future. The company has registered a way to install airbags in a model’s A-pillars as a way to cushion the blow to pedestrians.

The patent is an extension on the idea of using pop-up hood for protecting people from hard hits. In this application, sensors would monitor for a collision. If one occurs, then the edge of the hood near the windshield would move upward, and extra cushions would deploy from the A-pillars.

The new airbags would fit inside a fabric tube, and covers would keep them invisible when not in use. One end attaches to the top of the A-pillar, and the other is on the tip of the hood. This design lets the airbags adjust with the hood as it rises. Rather than banging into the windshield glass or the metal surround, a person would not collide with a much softer obstacle, which would reduce possible injuries. It’s a clever method to keep people safe.

Mercedes filed for this patent in July 2015, but the United States Patent and Trademark Office only published it on August 3, 2017. Given the delay, it seems possible that the company could have the safety tech on the road rather soon.

Earlier in 2017, Porsche patented a new A-pillar airbag for keeping a vehicle’s occupants safe. The company illustrated the device in use in a convertible and said that it would keep someone safe in the event of a crash that pushed a person toward the corner of a vehicle.