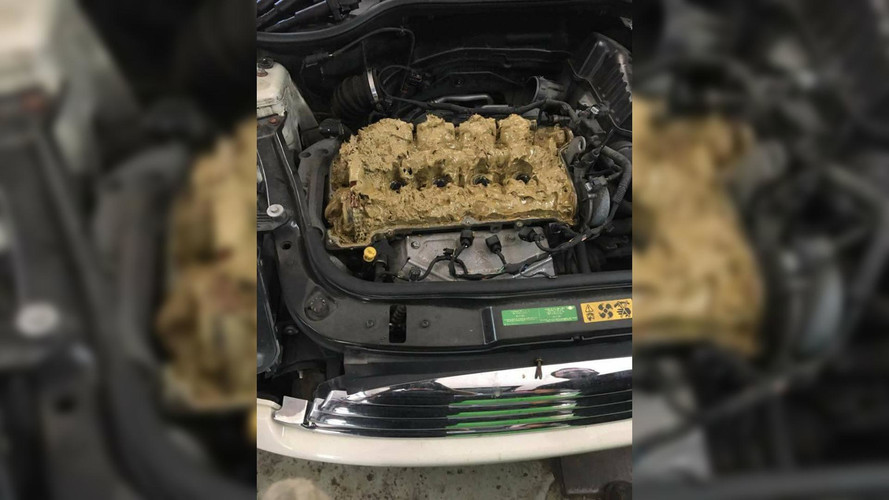 Good luck cleaning this stuff off.

When refilling your vehicle’s fluids, it is very important to be very sure that the right stuff goes into the correct place. If you want to see why this is so vital, take a look at these horrifying photos from the Facebook account of a BMW club in France. They show what happens when 1.3 gallons (5 liters) of windshield washer fluid goes into a Mini where the engine oil should be.

According to the story, the warning light for low windshield washer fluid was on in a woman’s Mini, and she was filling the tank up. However, somehow she emptied the container into the oil sump. The car started emitting blue smoke, and mechanics found this horrific scene upon opening up the engine.

Putting too much oil in a vehicle isn’t great for the engine, and windshield washer fluid is a poor lubricant. The combination of the two is even worse. It appears that even after running for just a few minutes, the oil turned to sludge.

The stuff has completely gummed up the valve train and turned a muddy brown color. Underneath, the situation looks even worse because green slime coats the entire block.

The damage appears to be terminal. Even if mechanics can clean all this gunk, the engine may have overheated, which could have warped the metal. Minis are not rare vehicles, and the simplest solution would probably be installing a new engine. Granted, that solution is rather expensive. Maybe the woman should consider this a learning experience and get a different vehicle.

Her mistake lets the world see why it’s important to pay attention when working on your car. After all, no one wants an engine coated in green goop that gives the powerplant the appearance of a poorly iced cake.