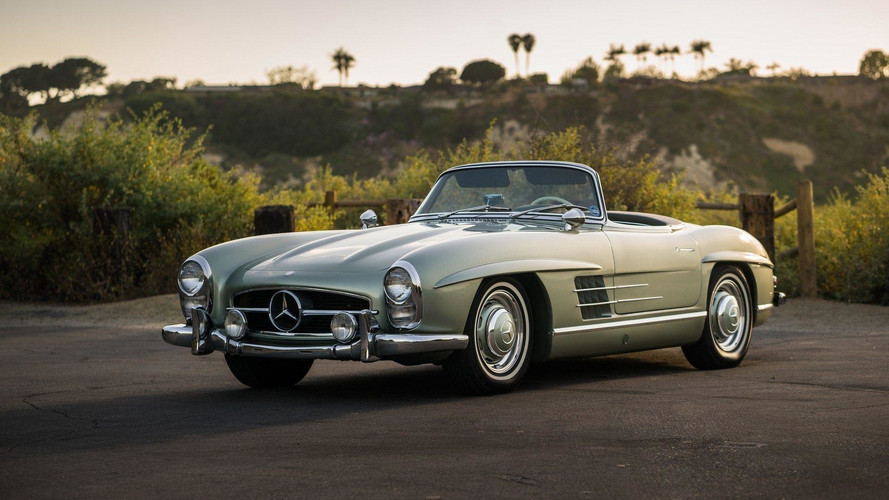 This beautiful convertible was originally Fire Engine Red, but a restoration repainted it this light shade of green.

With its gullwing doors and impressive performance by 1950s standards, the Mercedes-Benz 300SL coupe remains one of the most coveted vehicles in the world among collectors. It doesn’t let you put the top down to enjoy the wind in your hair, though. For that experience, check out this absolutely stunning 1960 300SL Roadster from RM Sotheby’s auction in Santa Monica, California, on June 24.

The 300SL Roadster celebrates its 60th birthday this year. Mercedes’ engineers didn’t simply slice off the coupe’s roof when creating the 300SL Roadster. They reinforced and lowered the space-frame chassis, which allowed for installing traditionally hinged doors. The lower sills made getting inside a little easier, too. Roadsters also received a slightly smaller grille opening than their hardtop counterparts. In total, the company built just 1,858 examples of the convertible with production running from 1957 to 1963.

This 300 SL Roadster was originally Fire Engine Red, but a restoration starting in 2005 switched the body to this interesting hue called Light Green Poly. The work also included stripping the car to bare metal, refinishing the chrome pieces, and extensive service to the mechanical parts.

According to RM Sotheby’s the 300 SL Roadster originally retailed for $11,000. The Bureau of Labor Statistics’ inflation calculator shows that amount is equivalent to $90,870 today. In comparison, the SL450 is the least expensive model in the roadster’s current lineup with a base price of $87,875 after destination.

This example should fetch much more than that, though. RM Sotheby’s expects the car to sell for $1.1 million to $1.3 million. Its ready for a long trip because the original set of fitted luggage comes with the roadster, too. Plus, there are photographs and receipts documenting the restoration process.

Looking to expand upon his success with the 300 SL coupe, American importer Max Hoffman thought that a convertible version would also sell quite well, and so the 300 SL Roadster was introduced in 1957. Of course, as the 300 SL would lose its top, engineers had to reinforce and modify the space-frame chassis to fit conventionally hinged doors. Through lowering the height of the chassis, this simultaneously allowed for greater ease of entry. Cosmetic changes were minor and included a smaller grille opening and dual chrome strips along the side sills, giving the car a more streamlined and glamorous look. At the rear, the spare tire was repositioned below the trunk floor, necessitating a smaller fuel tank but also maintaining reasonable luggage space.

Looking to keep the speed and performance of the closed 300 SL for the new roadster, Mercedes-Benz fitted the more sporting NSL engine of the coupe to all roadsters as standard equipment. This made the roadster capable of top speeds that ranged from 133 to 155 mph, depending on the final drive ratio specified. However, the stunning performance and design of the 300 SL Roadster did not come cheap, at a list price of $11,000. Ownership of a 300 SL implied an exquisite taste in engineering and aesthetics, and it was the ultimate automotive statement. Naturally, many found homes in the garages of celebrities, racing drivers, and other successful individuals with an appreciation for the finer things.

This particular 1960 300 SL Roadster was originally delivered in Fire Engine Red (DB534) and was changed to Light Green Poly (DB274) during its recent restoration. In 1983, the car was purchased by Des Crain of New Orleans; he sold the car to Milton Sheftel of Allentown, Pennsylvania, in 2002. The car was purchased in 2005 by Mercedes-Benz enthusiast Horst Temple. Shortly after purchasing the car, it was decided that the 300 SL would be fully restored. The car was completely stripped to bare metal and refinished in its current combination. All chrome parts were completely refinished, while the drivetrain was fully rebuilt by Marx Mercedes in Costa Mesa, California. The interior and soft-top were refinished in dark green, creating a very unique color scheme, and all-new rubber and seals were fitted. The consignor notes that the car was in very nice, driver-quality condition when the restoration began, and that no metal work was needed. The car is accompanied by photographs and receipts from the restoration, as well as a set of books, tools, and fitted luggage.

Boasting wonderful performance and reliable enough to be used on a daily basis, the 300 SL Roadster is an enthusiast favorite for vintage rallies, long-distance tours, or even use as a regular driver at one’s summer home. A well-restored example is a requisite in any collection, and this example certainly will not disappoint. With the car’s restoration completed earlier this year, it remains ready for the road and concours events in every respect. Boasting a highly compelling and unique color combination of light Green Poly over dark green, it will garner much attention wherever it travels.