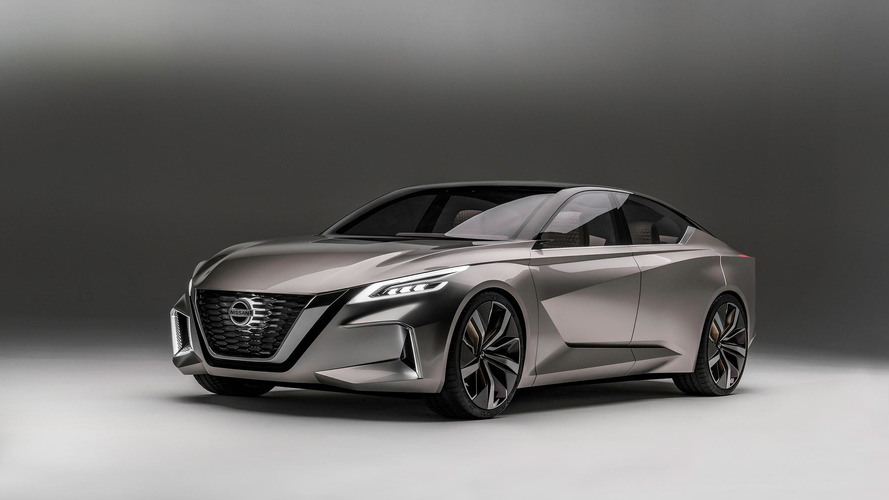 The company is calling it the Vmotion 3.0.

The stunning Nissan Vmotion 2.0 concept (pictured here) previewed a futuristic electric sedan when it made its debut at the Detroit Auto Show earlier in the year. Though it’s unlikely to spawn a true Nissan production model (though it will influence some aspects of design), a new Vmotion 3.0 concept could lead to a production-ready electric crossover.

According to Automotive News, Nissan will debut its new Vmotion 3.0 concept later in the year. The concept will combine three very key features for the brand moving forward: electrification, autonomous driving, and driver connectivity.

Nissan Executive Design Director, Mamoru Aoki, spoke at the Shanghai Auto Show about the concept. "We are now working on 3.0 for the future direction," said Aoki. Like version 2.0 before it, the new Vmotion concept will be fully electric, and designers will work with the new "emotional geometry" previewed on the sedan before it.

New design elements like flat flooring, aerodynamic body lines, and low-resistance tires could be part of this new direction, thinks Global Design Chief Alfonso Albaisa. The 3.0 will reportedly act as the blueprint for the next generation of Nissan vehicles, the upcoming Leaf will be the first model to adopt the new styling, with an electric SUV to follow.

"We are clearly focusing our attention on a crossover EV," said Daniele Schillaci, Vice President for Zero Emissions Vehicles. "The crossover will really embody the latest Nissan Intelligent Mobility features." No word on when this new crossover is expected, but the new Nissan Leaf will debut in September with the radical styling, and go on sale shortly thereafter.