2003 Subaru B9 Scrambler: Concept We Forgot 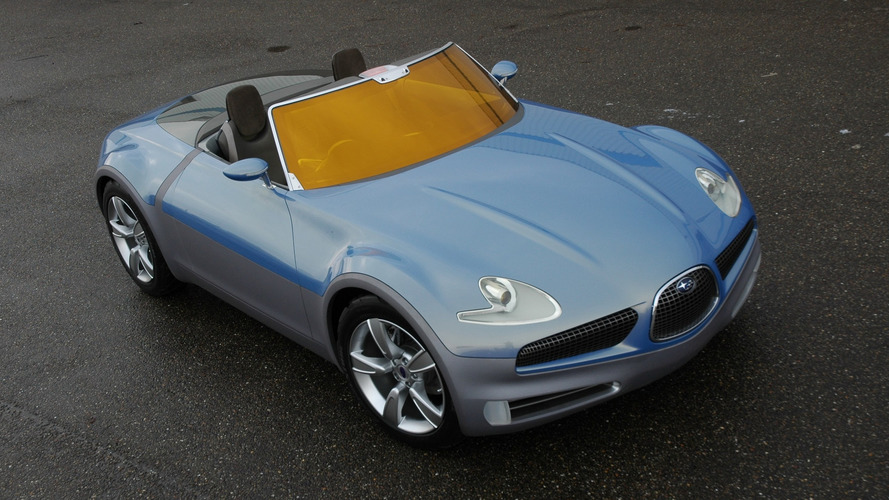 A lovely two-seater roadster for the whole year thanks to all-wheel drive.

The idea of a droptop Subaru piqued my interest and stumbling upon this rad concept was a perfect opportunity to have it featured in our weekly series.

The words “Subaru” and “B9” bring back bad memories of the Tribeca — which let’s face it — was ugly as sin. However, a much nicer B9 was presented two years before the midsize SUV’s launch and proposed the idea of an all-wheel-drive cabriolet with a hybrid powertrain and a variable ride-height suspension.

It served as a follow-up for the B11S sedan concept introduced several months earlier in Geneva to signal the company’s new styling approach led by chief designer Andreas Zapatinas. The Greek automobile designer had been responsible for the appearance of the Alfa Romeo 147 and Fiat Barchetta. Much like the B11S, the two-tone B9 Scrambler was purely a design exercise and as such it wasn’t actually seriously considered for production.

That might have been a missed opportunity taking into account it would’ve been a good solution to freshen up Subaru’s predominantly utilitarian image. The interesting styling as a nod to parent company Fuji Heavy Industry's expertise in manufacturing aircrafts would have made it stand out from the crop. In addition, the brand’s proprietary symmetrical all-wheel-drive system could’ve been the ace up its sleeve.

At the heart of the B9 Scrambler was a powertrain known as “Sequential Series Hybrid Electric Vehicle (SSHEV).” It combined a naturally aspirated 2.0-liter gasoline engine good for 138 horsepower with an electric motor developing 134 hp. At speeds of up to 50 miles per hour (80 kph), the car ran in EV mode and beyond that speed the combustion engine kicked in to unlock the full power delivered to those chunky 19-inch wheels.

Subaru’s engineers went to the trouble of giving the B9 Scrambler an electronically adjustable pneumatic suspension for a silky smooth ride. Not only that, but the high-tech setup granted the vehicle with a generous ground clearance of almost eight inches for tackling difficult roads.

Speaking of tech, it had a front-mounted radar as well as cameras in the windshield and near the rear license plate to check out the surrounding cars and alert the driver in case of an imminent danger. An early version of what we know today as a lane departure system was also implemented.

All things considered, the B9 Scrambler concept was a breath of fresh air back then for Subaru and it had the attributes to revamp the company’s image in the 2000s.