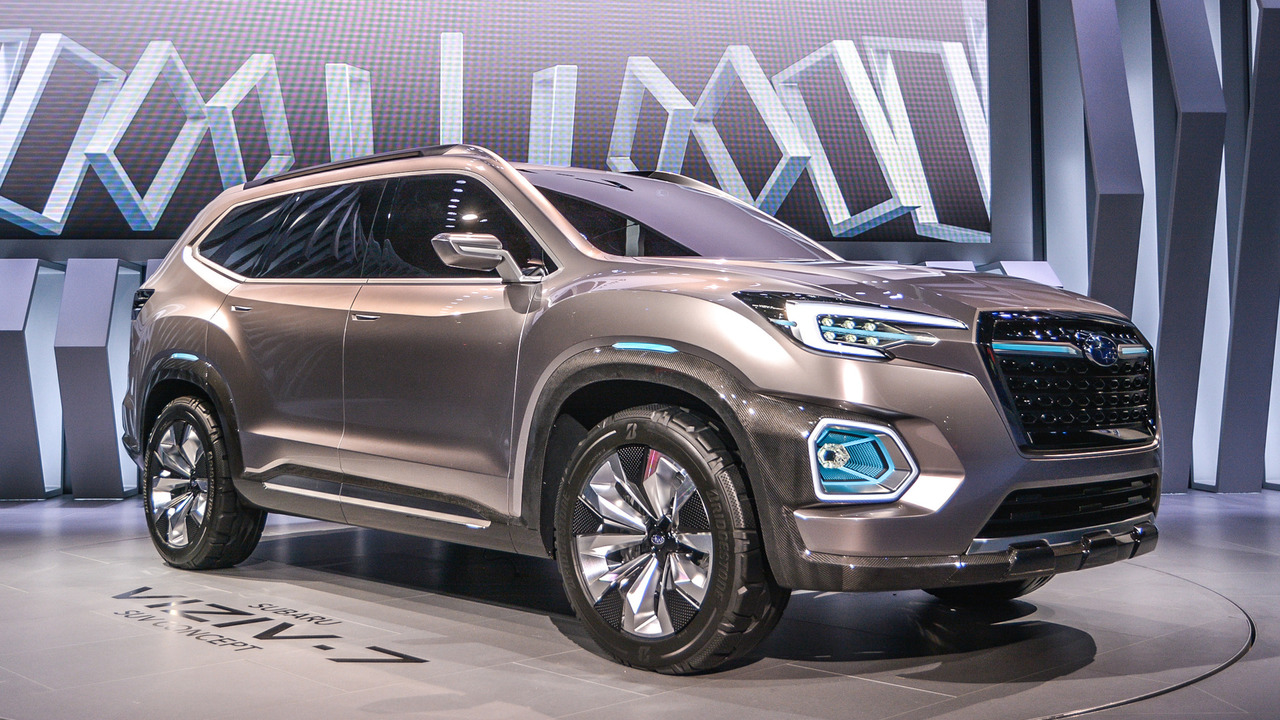 When the Outback doesn't have enough room, buyers can look to this upcoming three-row crossover for even more room.

Subaru already confirms that a seven-seat, three-row crossover is joining the brand’s lineup in the United States in early 2018, and the Viziv-7 SUV Concept at the 2016 Los Angeles Auto Show is a good preview of how the company’s biggest model could look. Subie is still keeping the automotive world guessing about the rest of CUV’s important specs, though.

The Viziv-7 SUV looks like a larger, tougher evolution of the current Outback and Forester. A large grille dominated the front, and the headlights feature bracket-shaped LEDs for running lights. The profile highlights the muscular fenders an arching shoulder liner that flows upward to the D-pillar. The hatchback is angular, and a strip of LEDs runs through it for a visual connection between the taillights.

“We know customers in this segment want a full-sized vehicle and the next 3-row from Subaru will be the biggest Subaru vehicle ever.” Takeshi Tachimori, corporate executive vice president at Fuji Heavy Industries.

Subaru doesn’t offer any details about the interior, but the cameras for the company’s EyeSight driver assistance suite is visible on the rearview mirror. The latest version of the tech in the Impreza includes aids like pre-collision braking, adaptive cruise control, lane departure warning, blind spot detection, and high beam assist.

Unfortunately, Subaru doesn’t give any info about the three-row crossover’s powertrain either. The company’s venerable combination of a boxer engine and all-wheel drive seems like a safe bet. However, the exact powerplant is a mystery. If the company sticks with what it currently has available, the 2.0-liter turbocharged boxer four-cylinder from the Forester XT with 250 horsepower and 258 pound-feet of torque seems like a viable option. The aging 3.6-liter flat-six with 256 hp and 247 lb-ft from the Legacy and Outback is another possibility, but a rumor suggests Subaru wants to stop using six-pot powerplants.

Subaru VIZIV is a concept series embodying the future vision of car development for “enjoyment and peace of mind” that Subaru wants to provide to customers.

With the VIZIV-7 SUV Concept, Subaru is demonstrating its thinking about how big a future Subaru SUV can be. “The concept expresses our core brand values, safety, dependability, capability for outdoor activities and a forward looking attitude,” said Takeshi Tachimori, corporate executive vice president, Fuji Heavy Industries, LTD. “We know customers in this segment want a full-sized vehicle and the next 3-row from Subaru will be the biggest Subaru vehicle ever.”

The official Subaru website (http://www.subaru-global.com/******.html) will feature images of the Subaru VIZIV-7 SUV Concept as well as a movie of the Subaru press conference.

*: VIZIV is a name derived from Vision for Innovation.