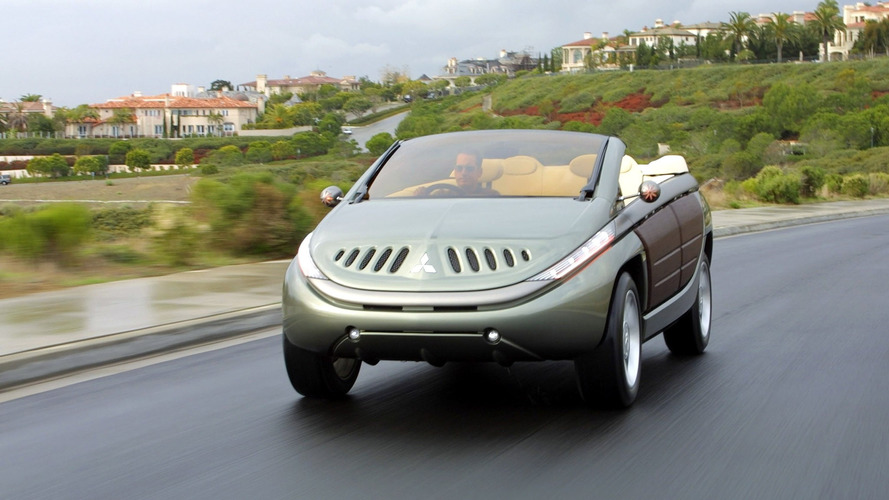 S.U.P. as in "Sports Utility Pack," not the term used by cool people to say what's up.

Because it begs the question: What were they thinking?

With a face that only a mother could love, the egg-shaped Mitsubishi S.U.P. makes the defunct Nissan Murano CrossCabriolet seem like quite the looker. Created for people “happy using hi-tech gadgets and gizmos Monday to Friday,” the concept was envisioned with detachable semi-transparent door panels featuring storage compartments, while the headlights and taillights were incorporated in tubes running along the car’s entire circumference.

Targeting outdoorsy people, the radically-styled concept from Mitsubishi had suicide doors and was able to accommodate a hardtop with a full-length electrically-retractable panoramic roof. It also received a fabric top for the S.U.P. Cabriolet concept exhibited in 2002 at the Geneva Motor Show. Inside the four-seater cabin there were seatback-mounted backpacks as well as a built-in shower, for some reason…

Much like today’s concepts from Mitsu, the Sports Utility Pack was engineered with a four-wheel drive hybrid arrangement by combining a combustion engine with two electric motors. A direct-injection 2.0-liter gasoline unit drove the front wheels with help from an automated manual transmission, while each rear wheel was powered by its own electric motor.

For obvious reasons, the S.U.P. never made it past the concept status. It was unveiled almost two years after the ItalDesign-built Isuzu VX-02 concept pictured above. The latter was based on the short-lived VehiCross and was pretty much similar in philosophy, but much more interesting and with some potential to hit the assembly line. That being said, it had the same fate as Mitsubishi’s S.U.P., failing to go into production.

Here’s a quick reminder of our three most recent concepts from the series: Dodge Super8 Hemi, Volvo LCP 2000, and Lotus Emotion.

Happy using hi-tech gadgets and gizmos Monday to Friday; then out for a bunch of fun communing with nature at weekends and holidays. Sports Utility Pack is designed for nature lovers who are equally happy with the latest in technology. Features include:

A design that gives graphic expression to fun-loving lifestyles. The tube line wrapping round the futuristic pop-art design body also houses front and rear lamp units, the full-length lamella roof panel, and semi-transparent door panels are just a few of the imaginative and original elements in this futuristic design.

An earth- and resource-friendly hybrid 4WD drivetrain gives gutsy all-surface performance, with great driveability. Mitsubishi's soft HEV (GDI-ISA) drivetrain powers the front wheels through an automated manual transmission and each rear wheel is driven by its own motor.