Honeycomb tire of the future 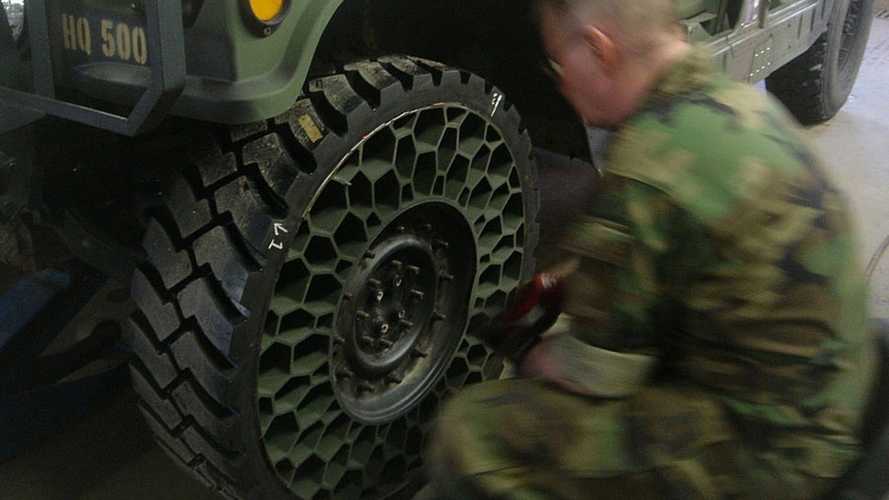 A bulletproof, honeycomb tire presents a number of opportunities, and challenges too; like ride comfort. If it works it could pave the way for a new tire of the future.

In combat numerous Humvee military vehicles equipped with standard issue "run flat" tires have been tragically immobilized by IEDs (Improvised Explosive Devices). So, the military wants an alternative tire that can support the additional weight of add-on armor, survive an IED attack, and still speed away at up to 50 mph.

Resilient Technologies and Wisconsin-Madison's Polymer Engineering Center have developed a "non-pneumatic tire" (without air) that meet these requirements.

We've seen this type of wheel before with the Michelin Tweel. In fact, the Tweel was one of several airless tires studied, but developers concluded that mother nature's honeycomb design was more suitable as it provided the most realistic ride feel of pneumatic tires, according to the developers.

"The goal was to reduce the variation in the stiffness of the tire, to make it transmit loads uniformly and become more homogenous," said mechanical engineering professor Tim Osswald. "And the best design, as nature gives it to us, is really the honeycomb."

Furthermore, other benefits of the design geometry are reduced noise and heat levels while in motion.

The honeycomb tires starts deliveries in 2011 with prices expected to be comparable if not less than current tires.

Gallery: Honeycomb tire of the future