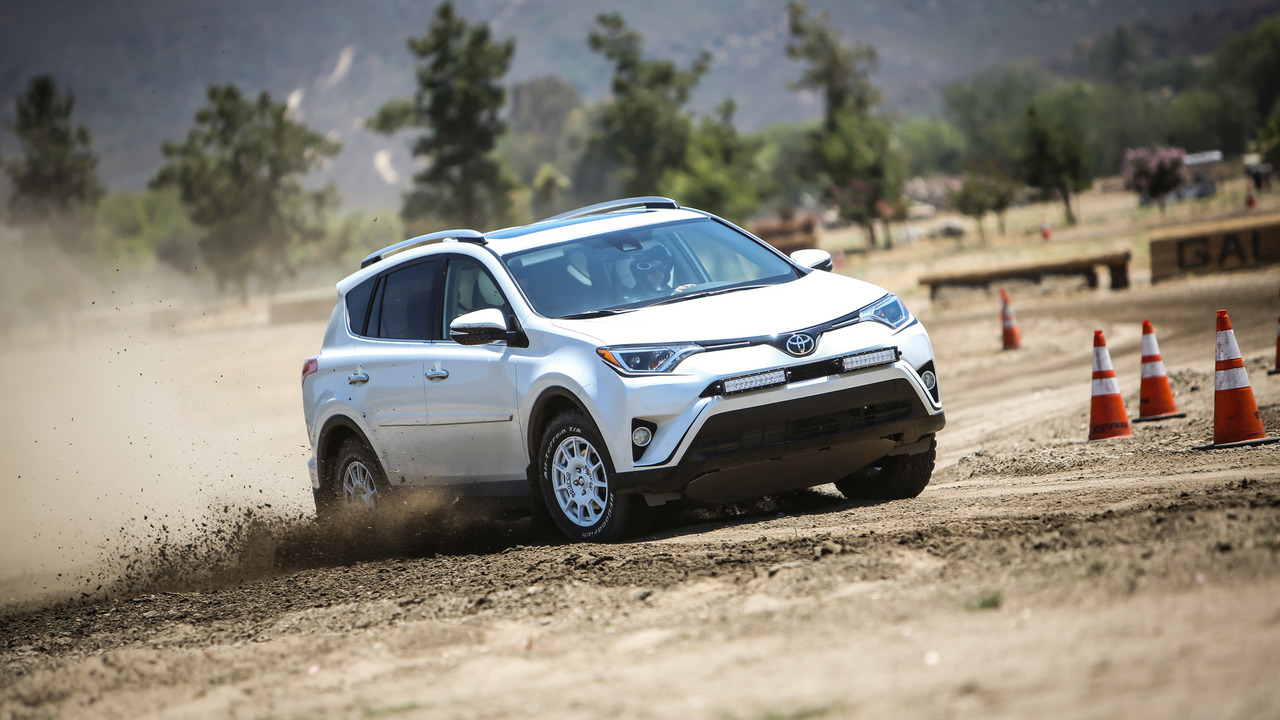 Is a factory-stock RAV4 is America’s newest road-going rally rocket?

Could the motoring world be on the verge of witnessing a triumphant resurgence of performance from the folks at Toyota? The evidence seems to point in that direction – the Toyota 86 (née Scion FR-S) is a terrifically fun (albeit badge-engineered) effort, and Lexus F cars have kept us properly entertained for years. Snazzy concept cars have fueled rumors of a new Supra for some time now, with those rumors being all but confirmed in recent months. Clearly Toyota has all the ingredients to bring some serious performance back to the brand, just so long as corporate strategy sessions remain focused on, you know, performance.

So when I got a call last month to attend a special Toyota event in Southern California focusing on the company’s rally program, I was quite excited. Toyota was once a major player in the World Rally Championship back in the 1990s – WRC legend Carlos Sainz captured the WRC title in 1990 and 1992 in a Toyota Celica GT-Four. Four-time WRC champion Juha Kankkunen drove a Celica to the championship in 1993, Didier Auriol captured the overall win for 1994, and Toyota wrapped up the decade by winning the WRC manufacturer’s championship in 1999 with the Corolla WRC.

So what kind of new performance-oriented Toyota would be inheriting this esteemed legacy in stage rally? A new all-wheel-drive Celica? A TRD Corolla? A proper hot-hatch version of the Yaris? Actually, Toyota wants you to get your rally on with a RAV4 compact SUV.

Toyota was once a major player in the World Rally Championship back in the 1990s – WRC legend Carlos Sainz captured the WRC title in 1990 and 1992 in a Toyota Celica GT-Four.

I’m not talking about some testosterone-injected TRD-spec RAV with claws on all four wheels and prolific boost, but rather a new-for-2016 SE model that offers no significant performance enhancements aside from a slightly firmer suspension. Or, Toyota reckons you can also go blasting down trails in a fancy-schmancy Limited model, because both were on hand to sample in the dirt at a specially prepared 2.1-mile rally stage, set up in Southern California’s Temecula Valley wine country.

Oh dear. Sounds like some bad sushi interrupted one of those corporate strategy sessions. But stick with me for a bit, because there are actually a few noteworthy surprises here.

I’ve been following the Rally America National Championship series since it took over for the SCCA Pro Rally series in 2005, so I knew Toyota was fielding a factory-backed RAV4 in the 2WD class for the 2016 season. Driving the RAV4 is Ryan Millen, and if that name sounds familiar, it should. Ryan’s dad is accomplished off-road guru Rod Millen, and his brother Rhys just blasted up Pikes Peak in less than nine minutes behind the wheel of a 1,600-horsepower electric car.

Before you start wondering why Ryan is racing a Toyota RAV4 while the rest of the Millen clan is living large, there are a few things you need to know. Ryan’s also a past winner at Pikes Peak and the Baja 1000, so he’s got some serious skill of his own. Ryan and his co-driver Christina Fate are currently tied for first place in Rally America’s 2WD category with three events left in the 2016 season, and it’s not like they don’t have competition. Not only is the 2WD category filled with talented drivers, they’re all running nimble hatchbacks with barely half the RAV’s mass.

Still not impressed? Then you should also know that Ryan’s Toyota RAV4 runs the factory-stock engine, brakes, and transmission.

For those who aren’t in the know on the latest RAV4, that means a 2.5-liter DOHC four cylinder making 180 horsepower. That means 11.7-inch brake rotors up front and 11.2-inch discs in back. And most impressive of all, that means an honest-to-goodness six-speed automatic gearbox turning the front wheels. When I asked Ryan how many times they’ve swapped or rebuilt the transmission, his answer was nada. Ryan estimates about 5,000 racing miles on the stock automatic since he started driving the RAV in 2015.

The suspension is full-on race car spec so the RAV can catch air, land, and keep going.

That’s not to say Ryan’s RAV4 isn’t race-prepped. It’s gutted inside to save several hundred pounds, and of course it sports a full cage for safety. The suspension is full-on race car spec so the RAV can catch air, land, and keep going. The air conditioning system has been pulled and the exhaust flows freer, but the RAV is still tuned for 180 horsepower (technically speaking, 176 is stock). Race-compound brake pads are used with stock rotors and calipers, and the front/rear bias is closer to 50/50 so Ryan can left-foot brake it for better rotation in corners without constantly grabbing the handbrake. And since rally cars are sideways more often than not, the Rally RAV has no ABS, traction control, or stability control.

There is an extra cooler for the transmission, and they did weld up the diff because – big surprise – nobody offers an aftermarket limited-slip unit for a RAV4. During a hot lap with Ryan around the course, the rally RAV was indeed impressive; biting the dirt hard with easily controlled rotation through corners that you wouldn’t expect from a RAV4, even one as modified as this. Only once did the auto not downshift to Ryan’s liking; otherwise the shifts were crisp and cogs were held seemingly as long as he needed them.

So what does all this have to do with the actual Toyota RAV4 you can go buy right now?

I’ll admit to being pleasantly surprised with the RAV4’s ability to have some fun in the dirt.

In addition to showcasing Ryan Millen’s full-on race-prepped RAV4, Toyota brought a few 2016 RAV4s adorned with skid plates and gnarly all-terrain tires for myself and several other journalists to toss around the aforementioned rally course. The idea was to showcase the vehicle’s ability as an exciting, fun-to-drive dirt-roader that would appeal to younger buyers. Because you know, people shopping for a $30,000 five-seat SUV are also concerned about executing precise handbrake turns.

After spending an afternoon doing just that, I’ll admit to being pleasantly surprised with the RAV4’s ability to have some fun in the dirt, and that’s coming from someone who learned to drive on some of the same Northern Michigan back roads the Rally America series currently visits. The SE model, with its tighter suspension, clearly holds an advantage in such circumstances versus the other trim levels; it was consistently easier to coax into manageable lift-throttle oversteer, and in the faster parts of the course it was less prone to body roll. The Limited and XLE weren’t quite as interested dancing, but neither were they intent on plowing forward. Only when corners were muddy did the RAV default to mad understeer, regardless of the model. The tires played a big part of that, but there was still an inherent balance in the RAV’s mannerisms that was comfortable.

Yes, the 2016 RAV4 can pull off decent handbrake turns, if that sort of hooning matters to you.

All the RAV4s save for Ryan’s racing version were equipped with all-wheel drive, and with the aggressive all-terrain rubber they bit into corners much harder than one would expect on such a loose surface. I’m not a professional rally driver but I’ve driven the occasional rallycross; it took me a few laps to acclimate to just how much grip the car had when entering corners at speed. All day long the RAVs took the punishment in stride; even the six-speed automatic seemed to do what I wanted it to do, when I wanted it. And yes, the 2016 RAV4 can pull off decent handbrake turns, if that sort of hooning matters to you. As you might guess, it does to me.

On paved roads, the RAV4 is everything you’d expect from Toyota. In other words, it’s comfortable, capable, and nicely appointed, but it doesn’t goad you into doing anything more than setting the cruise and turning on the A/C. Even the SE with its extra stiffness isn’t particularly inspiring. Yes, it can be satisfying in the bends if you want it to be, in much the same way a $2 frozen pizza can satisfy your craving for fresh Chicago deep dish. It might suffice for a day or two, but eventually you’re going to want the real deal.

In reality, Toyota doesn’t want to make a diehard rally version of its popular crossover. The company wants to engage a younger demographic by pitching the current RAV4 as an exciting outdoor-lifestyle vehicle.

But that’s not the point. Nobody is going to buy a RAV4 because of its rally cred. It’s too big, too heavy, it doesn’t have enough power, it doesn’t have a proper manual gearbox, and it has non-defeatable driver assists. And yet, Ryan Millen is competing at the top of his Rally America class with a stock-ish RAV4 that suffers most of these faults. That’s impressive any way you cut it; it’s a testament to both Ryan’s skill behind the wheel and the stock RAV’s DNA, which is just a mutated gene away from becoming a superhero. Coupling the SE’s suspension tuning with an injection of power and a tweaked all-wheel drive system for a bit more rear bias would create an epic rally-sport compact SUV. And Toyota would be the only real player in that market.

In reality, Toyota doesn’t want to make a diehard rally version of its popular crossover. The company wants to engage a younger demographic by pitching the current RAV4 as an exciting outdoor-lifestyle vehicle, and is using stage rally to get a foot in the door. That makes a certain kind of sense, as many rally fans live and breathe Subaru – a manufacturer that has never had a problem selling cars to younger buyers who prefer hiking and camping over video games and binge-watching on Netflix.

The 2016 Toyota RAV4 is not a rally car, but it does have enough mojo to be the outdoor-lifestyle machine Toyota wants it to be. Will outdoorsy millennials go for it? If Ryan keeps racking up wins with his sort-of stock RAV4, they just might. If nothing else, a class championship in the Rally America series will help cement the RAV4 as a machine that can hold up to some serious abuse, and that’s something buyers of any demographic can appreciate. Well played, Toyota.