These new colors certainly brightened up our year.

Once again in 2020, people bought boring car colors. The favorite hues this past year were white, black, grey, and silver, which accounted for 81 percent of all new cars sold worldwide. That's according to data from Axalta's 68th annual Global Automotive Color Popularity Report. But why do people buy cars with such drab colors when 2020 brought us so many bright new hues?

At least 15 manufacturers debuted a bold new exterior color option this year, ranging from high-end companies like Lamborghini and Rolls-Royce, to mass-market manufacturers like BMW, Chevrolet, and Ford. So before going out and buying another dull white, grey, or black vehicle, check out this list to see what new colors you can choose from next year.

As if the new Genesis GV70 and GV80 crossovers weren't handsome enough, the company added a bold new hue to the color palette for 2020 called Brunswick Green. Not to be mistaken with the nearly as sharp Cardiff Green metallic, Brunswick Green is one of three matte finishes available on the pair, alongside Matterhorn White and Melbourne Grey. But as far as we can tell, the matte finishes are only available in markets outside of the US. Hopefully that changes.

Maserati debuted the new MC20 sports car this year, and with it, half a dozen bold exterior finishes. But our favorite of the bunch is easily Blu Infinito. The bright blue hue accentuates the sleek angles of the MC20, and when paired with the optional blacked-out wheels, gives the Maserati sports car an appropriately aggressive look.

We know the whole Gulf livery thing is overplayed, but when Lamborghini debuted the Huracan STO in a look similar to the iconic Gulf styling, we couldn’t help but love it. The combo of Blue Laufey and California Orange looks so good atop the wildly styled Huracan, particularly when joined by high-spoke black wheels, black accents, and some appropriate STO badging.

The Ford Bronco – and the smaller Bronco Sport – were two of the biggest new car debuts of the year. The revival of the nameplate with retro cues and rugged capabilities made for an instant winner. But one thing we didn't talk about enough was how many good colors are available for both the Bronco and Bronco Sport, our favorite of the bunch being Cactus Gray. Though more subtle than the reds, yellows, and blues also offered on the Bronco, Cactus Gray is a simple shade that looks great atop the tough lines of the Bronco and Bronco Sport.

The Porsche 911 4S Targa doesn't need a bright, flashy color to catch attention… but the new-for-2021 Cherry Red paint certainly doesn't hurt it, either. Introduced on the Heritage Edition model back in June, the Cherry Red 911 Targa honors Porsche icons from the 1950s and '60s with a distinctive livery that includes a number roundel on the door panels, white accent stripes above the headlights, and a unique "Porsche" wordmark across the bottom of the door. The 911 4S Targa Heritage Edition does come in four other colors, but Cherry Red is the best by far.

The electrifying Ford Mustang Mach-E debuted this year with an impressive color palette that included classics like Grabber Blue and Rapid Red. But our favorite color on the Mach-E is a brand-new hue designed for this vehicle specifically: Cyber Orange. The bright orange paint job gives the Mach-E an even bolder appearance and looks great paired with one of the black wheel options.

Mercedes-Benz Designo Manufaktur isn’t one specific color, it’s actually a program that allows customers to paint their Benz whatever they want – including competitor colors. Designo Manufaktur has been around since 2015, but this year the expanded palette now extends to the E-Class, S-Class, and AMG GT, and also includes historic paint options as well as competitor hues. The AMG S63 Cabriolet pictured here, for example, wears a Deep Green from the Mercedes-Benz heritage portfolio.

One of the main updates to the 2021 Cadillac CT4 and CT5 is a sharp new exterior shade called Diamond Sky. It’s a subtle blueish, greyish finish that adds an extra touch of upscaleness to the two luxury sedans, and pairs with some new interior options as well: Centaurus aluminum and Galaxy wood.

Dodge introduced Gold Rush on the Challenger 50th Anniversary edition before later expanding it to the Charger and eventually deciding to make it even more widely available on the coupe for 2021. The dark color has a slightly satin finish that picks up the light to highlight a vehicle’s curves. Under the right illumination, the shade can appear like a dark shape of yellow that borders on a mustard tinge.

Not only does it have a great name, but Dodge's "Hellraisin" purple paint job looks phenomenal atop the Charger and Challenger. It's new for 2021, joining other hues like Sinamon Stick, Frostbite, and Gold Rush, which is also on this list. Helraisin spiritually replaces the slightly brighter Plum Crazy purple that was popular on the duo a couple of years back, and in our opinion, looks even better.

There aren’t enough blue cars in the world, and this stunning shade on the Acura NSX is proof of that. It’s also rooted in NSX history, as Long Beach Blue Pearl is a reformulated version of Long Beach Blue that was briefly available on the first-generation NSX. It’s possibly the most memorable color from the first-gen as well, as only 88 cars wore it. When Acura announced the updated blue for the new NSX, there was no mention of production numbers. This time around, we hope it’s more than 88.

This complex color is predominantly a shade of gray, but there are green and blue hues when you look deeper. It’s a perfect match for Toyota's TRD Pro SUVs and pickups by fitting their rugged ability, yet also giving them a more singular appearance that works since these models are not very common sights on the road.

This year Mercedes-Benz broke the Nurburgring lap record in the AMG GT Black Series with a time of 6:43.61 – or 1.36 seconds quicker than the Lamborghini Aventador SVJ. And the AMG GT looked good doing it, draped in a brand bright orange color that the company appropriately calls Magma Beam. This color is exclusive to the AMG GT Black Series and pairs well with black accents on the hood and front fascia, as well as the GT's many wings and aero features.

Rolls-Royce is usually known for its underrated, elegant hues – black, white, silver, etc. But this year the company decided to brighten up its Black Badge models with a color palette that it calls "Neon Nights." Available on the Dawn, Wraith, and Cullinan Black Badge models, the Neon Nights paint options consist of three distinctive hues: Lime Rock Green, Eagle Rock Red, and Mirabeau Blue. And each of those paint options is joined by either a black or white leather interior with accenting finishes on the dash.

Lamborghini makes this list a few times, and for good reason. The Sian hybrid hypercar the company debuted this year brought with it a stunning new hue: Oro Electrum. The goldish, greenish finish is a bold look for the already aggressive-looking Sian – and looks even better when joined by copper wheels and body accents.

Yes, red Corvettes are an automotive cliché, but this isn’t just a plain old shade of red. Replacing Long Beach Red in the 'Vette lineup for 2021, Red Mist is a bit brighter but arguably deeper, exuding a candy-apple quality that so often turns heads in the custom car scene. Accented with black trim, it looks outstanding on the C8 and could arguably be the best shade of them all.

Whether or not you love the look of the new BMW M3 and M4, at least the duo brought with them some interesting color options. The Sao Paulo Yellow M4 looks particularly good; the highlighter-esque hue gives the coupe an even bolder expression to match its polarizing face, and looks even better when joined by black wheels and a handsome black-and-blue interior with matching Sao Paulo Yellow accents.

This year Jaguar celebrated 60 years of its iconic E-Type sports car with the throwback F-Type Heritage 60 Edition. The limited model gets E-Type badging, unique wheels, and a standout Sherwood Green paint job you won’t find anywhere else in the lineup. The dark green paint pays homage to the original E-Type, which boasted a similar color. Jaguar will build just 60 examples of this F-Type (in both coupe and convertible), each one by hand.

The appropriately named Ram 1500 "Built To Serve" edition comes in a few unique hues, but our favorite is the military-inspired and appropriately named Tank Green. The dark green shade looks great atop the pickup, joined by black wheels, a darkened grille, and black door handles, side mirrors, and more. Ram says it will offer just 1,000 examples of the Built To Serve edition 1500 in this particular color, available early in 2021.

One of a handful of greens on this list, the new Audi R8 Green Hell Edition lives up to its designation with a one-of-a-kind Tioman Green paint job. Riding atop two-tone red and black wheels, Audi says it will offer just 50 examples of the sharp R8 worldwide in honor of the company’s five overall victories at the 24 Hours of the Nurburgring. 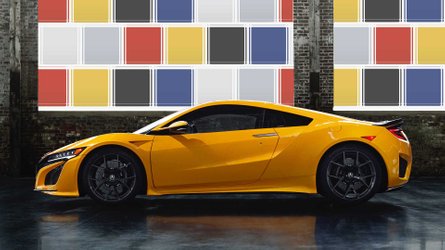 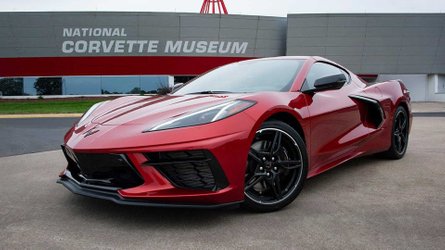 See How The 2021 Chevy Corvette C8 Looks With Red Mist Body
By: Jeff Perez
++
Got a tip for us? Email: tips@motor1.com