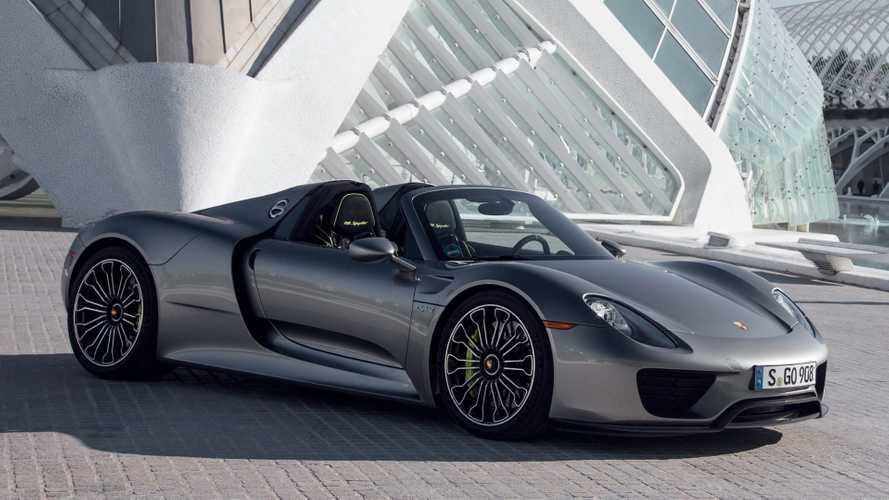 Hard to believe it's been almost six full years since the first Porsche 918 Spyder debuted in Frankfurt. It's more mind-blowing knowing Porsche pulled the cover off the first concept three years earlier in Geneva. But in 2019, with Porsche's ongoing push towards electrification – talking specifically about the upcoming Taycan – looking back at the 918 makes a lot of sense.

The 918 was Porsche's first production hybrid; an 875-horsepower (643-kilowatts) hypercar is a hell of a way to dip one's toe into the world of electrification. The naturally aspirated 4.6-liter V8, borrowed from the RS Spyder Le Mans Prototype racing car, produced 600 hp (447 kilowatts) and 398 lb-ft (539 Newton-meters) of torque on its own. Aided by two electric motors, providing a total 282 hp (210 kW), the 918 was able to achieve its impressive total output.

The 918 showed up at an interesting time, too. Ferrari unveiled its own V12-powered, hybridized hypercar with nearly 1,000 hp (745 kW) on tap – the LaFerrari – just a few months prior, and McLaren did the same with the P1 in 2012. The British brand's twin-turbocharged V8 and an in-house electric motor gave the P1 nearly 900 hp (671 kW). But while the 918 had less power than LaFerrari at launch, and weighed slightly more than the P1 (3,602 pounds vs. 3,411 pounds), it proved itself more so than the other two on the track.

Mere months after the 918 showed its final sheet metal in Frankfurt, Porsche took its hybrid hypercar to the Nurburgring. Equipped with the optional Weissach Package (which reduced weight), the 918 recorded a fast lap of 6:57 on the 12.8-mile (20.6-kilometer) road course. That time beat the previous lap record by a whopping 14 seconds and marked the first time ever a production vehicle would break the seven-minute barrier. Today, the 918 is still the seventh fastest car ever around the 'Ring.

And that lap time set a precedent. The Porsche 918, in its one-year production run, sold out in just a few months. Buyers in the U.S. snapped up 297 of them, China and Germany grabbed another 100 each, and Canada claimed 35, with other countries like Switzerland and the Netherlands claiming a few units.

Today, we remember the Porsche 918 as the starting point for Porsche. With the Taycan upcoming, and more EVs on the way – the company promises – we can thank the impressive, awe-inspiring 918 for leading the way.