Poll: Should Lincoln Continental Have Always Had Suicide Doors?

Whether the preferred term is coach doors or suicide doors, we want your opinion on whether the Continental should have them.

The Lincoln Continental Coach Door Edition made a big debut Monday after only a single teaser for the special model. It marks the first time since the 1961 to 1969 Continental that suicide doors are available. The retro-tinged, limited-edition model is garnering quite a bit of conversation among Motor1.com's writers and editors and things are so heated, that we want to get the opinion of you, the readers. Take a look below and register your vote.

Motor1.com follows this industry fanatically, and we love a surprise or an automaker trying something bold, rather than loading a "special edition" with different badges and black trim. Lincoln is legitimately doing something grand with the Continental and its suicide doors.

Get all the details about the Continental Coach Door Edition: 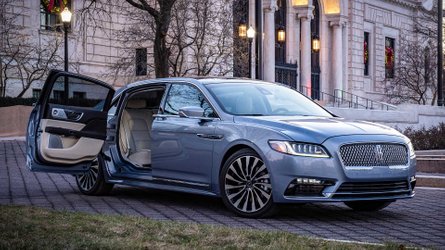 But some of the team can’t help but find the Continental Coach Door Edition a confusing decision by Lincoln. If Lincoln has the ability to fit the Conti with suicide doors, why not do it from the start? Even the original concept car didn't have them.

Making things even weirder, the company went to the engineering trouble of grafting the doors onto the Continental and stretching the wheelbase six inches, but will only build 80 units for 2019 and a "limited number" in 2020. Why go to so much effort to make so few cars?

If Lincoln is going to do the work to make this new layout possible, shouldn’t marketers call the changes a mid-cycle refresh and put the coach doors on every Continental that rolls off the assembly line? The reverse-opening doors would immediately differentiate the Lincoln from every other luxury sedan on the road that doesn't have the Spirit of Ecstasy as a hood ornament.

Other members of the staff are a bit more cynical, thinking this is too little too late for the slow-selling Continental. The coach doors definitely set the Lincoln apart, but the change comes at a time when premium buyers are rapidly turning their attention towards crossovers and SUVs. Again, if Lincoln had fitted coach doors from the start, maybe the Continental could have moved the needle. But the time has passed to get people excited about the sedan.

We want to know what you think, though, so vote in the above poll and tell us whether the coach doors are the right fit for the modern Continental.