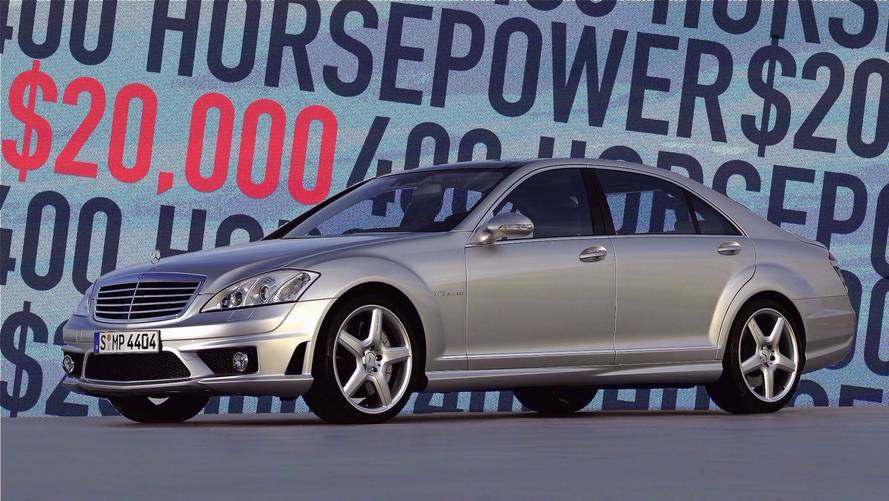 It’s a common question / bar topic amongst those of us obsessed with cars: “What’s the fastest car I can get for [insert personal budget here]?” And, frankly, it’s a hard question, even for experts, to answer. There are a ton of variables: Prices change from region to region, deal to deal, and day to day; “fast” is a very relative term, and “fastest” more slippery still.

Yet, without involving NASA or those eggheads at SAE, we can drum up a pretty good hit list just by careful use of the internet.

For our simplistic purposes, we’re going to call anything with 400 or more horsepower “pretty fast” (and looking at the results, we stand by it). These days a used car with that much power can actually be had for under $15,000 if you’re patient, and know what you’re looking for, but the options really open up if you have $20k to spend. For the sake of consistency, if not science, we’re developing our car values using Kelly Blue Book tools, assuming 50,000 miles (we don’t want a rolling pile of garbage, and there are Jaguars on this list… ), a private party sale, and Very Good or better condition.

As a way to organize the top results, we’ve decided to sort by horsepower per dollar. It’s a truly meaningless metric, but fun to put on the spreadsheet, anyway. The resulting list isn’t comprehensive (we look forward to seeing your picks in Comments, below), and it isn’t without flaws, but it is a lot of fun.

Cadillac got serious about fighting BMW M and Mercedes AMG in the early 2000s, notably with its bloody fast sports sedan, the CTS-V. Today, just under fifteen grand will buy you a reasonable example of the 400-hp car, and undoubtedly many miles of fast Art & Science driving in the process.

If there’s a big car-guy lesson that was reinforced in the process of compiling this list, it is that storied brands with big depreciation problems create some alluring secondhand vehicles. The XF Supercharged, powered by an impressive 4.2-liter V8, falls tastily into that group. Used Jags don’t always make the most compelling ownership propositions, but when everything works, cars like this bruiser of an XF are a joy.

The second product from Jaguar Land Rover in our list, this blown, 5.0-liter V8-powered SUV, will not be the last. And while at nearly $18,000 to allegedly put one in your driveway it isn’t crazy cheap, the slight price premium is more than made up for by legendary Range Rover off-road ability, and 510 mighty horsepower.

If you were impressed with the Range Rover throwing up 500+ ponies for under twenty grand, don’t look now. Yes, the S65 is a little older, and the most expensive car on this list. But it makes the cut easily, thanks to a massive 604 hp created by its segment-leading, 6.0-liter V12 engine – “segment” here being used, 400+ hp cars for under $20k. Getting a hilariously fast sedan for that money is bonkers… just don’t expect your purchase payment to be the last check you write to keep this exotic limo on the road.

That’s right, you too can now be the owner of a sexy Italian exotic, powered by no-less than a Ferrari V8, for the bargain price of… $13,000! Good deal, or the best deal? Much of that depends on how thirsty your soul might be for drinking in the aural liqueur that is a Maserati exhaust note at 5,000 rpm. Four shy of four hundred horsepower (we just couldn’t resist adding it) come galloping from 4.2-liters of revvy V8 here, and the result is magic on the cheap.

In our opinion the best-deal Cadillac on this list sits up there at #10, but you can’t front on the bold, sub-$30-per-horse STS-V. What’s that you say? You didn’t know there was ever such a vehicle? Here in the Motor City, the V version of Cadillac’s big boy STS is a little less rare, but we’ll admit that the supercharged, 4.4-liter V8-engined sedan is probably an uncommon sight in most neighborhoods. All the more reason to seek one out; with 469 hp driving the rear wheels, you can afford to be less picky about dynamic things like bodyroll and steering feel.

In March of 2003, Car and Driver’s Dan Pund reported that, at its v-max of 155 miles per hour, the E55, “feels a lot like the average new car doing 90 mph.” That – with comparisons to Ferraris and reports of 4.5-second 0-60 times – was impressive when the car was new and cost $70,000-ish. It’s goddamn unreal now that you can pick one up for the price of a horrible Mitsubishi Mirage.

We’re not going to belabor this point, because it’s hardly critical to the inclusion of another Jaguar on our list, but the S-Type, even in R guise, is U-G-L-Y ugly. It’s an ugly car. We don’t care for its looks. You get that?

Even still, 400 hp for just over ten grand is pretty impressive. In theory the motive force of that lovely 4.2-liter V8 (an engine we’re not done with yet) will move the car along smartly enough that people you care to impress won’t be able to get a good look at it. Speed over taste, always.

Now, that’s more like it! The same supercharged 4.2-liter V8 found in the grotesquery that is the S-Type’s face, can also be had – for less money – under the utterly classic hood of the XJR. Why are we still even discussing it? Buy the XJ.

It’s downright criminal that a 425-hp vehicle can be purchased for four figures, considering some of you idiot drivers we see on the highway every day. For the love of god, don’t tell your dummy 16-year-old kid about the original 300 SRT8 or we’ll all be dead.

Now that we’ve cleared that up, there’s just not a bargain like this out there anywhere else. Consider this: There are three other SRT8 models that share this basic powertrain, and none of them is cheap enough to crack the top 10. (The 2006 iterations of the Dodge Charger SRT8 and Dodge Magnum SRT8 can be found on the runners up list, but the Jeep Grand Cherokee SRT8 still lives well above the $20k mark). Why no love for the baller 300? We couldn’t say. But we do know that, on a list of smokin’ cheap power bargains, the Chrysler is the hottest thing on fire.