Shop Girl: Getting Under The Hood With Women Who Wrench 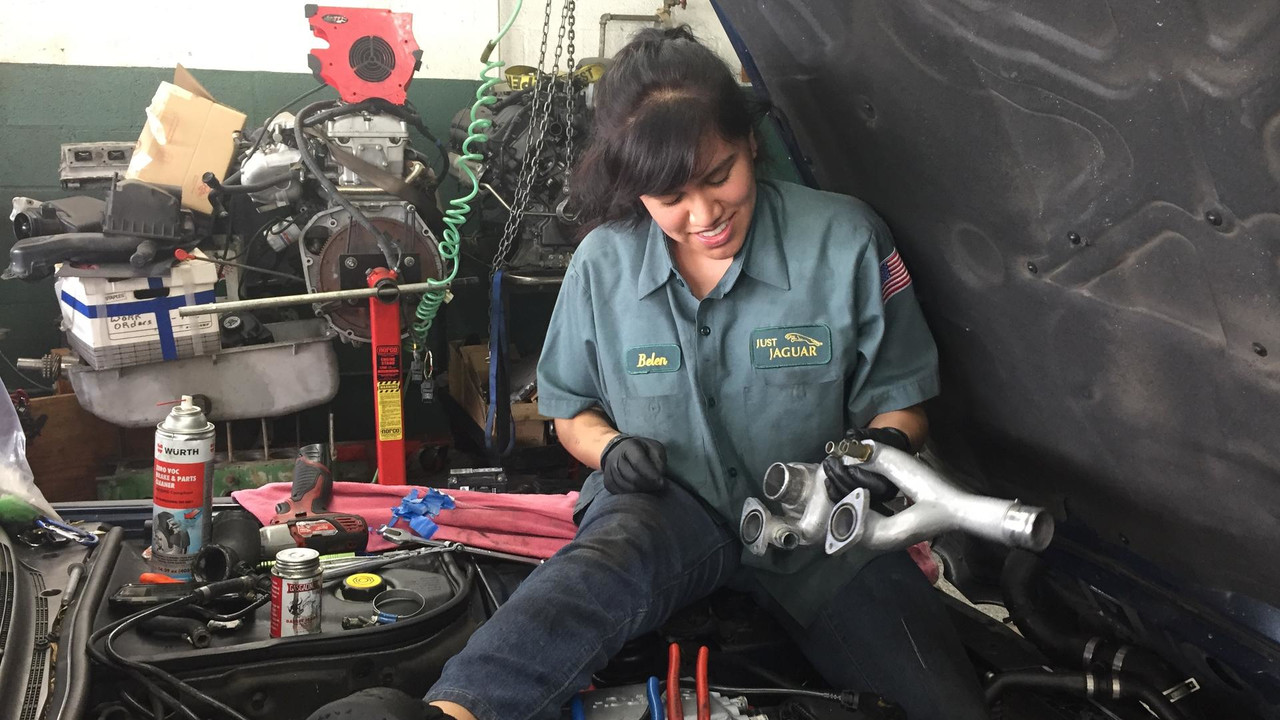 Why a woman working on your car might seem strange, but it shouldn’t.

Less than a year ago I saw a woman working on a car in an auto shop. In the moment, watching her rotate the tires on a Volkswagen Golf R, it occurred to me how cool it was. What didn’t occur to me until later was that it was something I’d never seen before.

Talk to a woman who gets under the hood for a living and while they’ll acknowledge that their peer numbers are small, they don’t seem to think what they do is unusual. And from their perspective, it might be wise to seek one of these grease unicorns out, because a lady wrench might just take better care of you and your car than Bob over at Anyplace Auto Repair. Considering that men have dominated the auto repair industry since the very first car broke down, it’s a bold assertion, and one being tested, as both female business-owning veteran wrenchers and oil-changing newbies try to make a go of it in the garage.

The numbers don’t lie: In 2016, a measly 1.9 percent of automotive repair and maintenance employees in the United States were women, according to the United States Bureau of Labor Statistics. If you factor in bus and truck mechanics, diesel specialists, heavy vehicle and mobile equipment service technicians and mechanics, that number rises to barely above about 2 percent. Robin Mainer, a Texas woman who owns Honest-1 Auto Care in Dallas, would love to hire female mechanics, she just can’t find any. “If you hear of anyone looking for a job, send them my way.”

In 2016, a measly 1.9 percent of automotive repair and maintenance employees in the United States were women.

Gender stereotypes aren’t good for anyone, but they’re tough to ignore for a woman working in a man’s world. “What’s a pretty little thing like you doing working on cars?” is a line Bogi Lateiner, co-host of All Girl Garage, a reality show in its fifth season on the Velocity network featuring three women repairing cars and motorcycles, has heard since opening her own shop. Bogi’s Garage opened ten years ago in Phoenix, and some men have actually studied her hands, like some modern-day Rhett Butler calling out Scarlett O’Hara for doing manual labor.

But any detractors haven’t stopped Lateiner, who fell in love with a Volkswagen Beetle and enrolled in high school auto shop to learn how to work on it. Initially things weren’t easy: “I hated the way I felt, like I had a target on my head,” she says. But that Bug was fully restored by the time she graduated. Sometimes negativity can be a massive motivator.

“My sister cooks and has her hands stuck inside the guts of a chicken, but thinks me having my hands covered in motor oil is gross. I don’t get it,” says Belen Hernandez, the woman I saw working on the Volkswagen at Just Jaguar Car Service in the San Fernando Valley. She’s only been a mechanic for a year and still isn’t used to the reaction from guys when she tells them what she does. “I wear dresses when I’m not working. Guys sometimes look at me funny when I tell them what I do.”

Society is used to seeing men try all sorts of traditionally feminine pursuits. There are male bridal gown consultants on television. A macho Italian guy is the Cake Boss. Hairdressers, stylists, tailors, there’s not one profession I can think of where I’ve never seen a man hard at work – with the possible exception of manicurist.

By far the biggest advantage your garage gal might have going for her is her extra level of motivation for, say, repairing your exhaust manifold in the first place. “Where a lot of men fall into being a mechanic, women who are in it are here because they desperately want to be,” Lateiner asserts. “There are so many barriers, so women who make it are incredibly driven. They work harder because they have to prove themselves.”

“My sister cooks and has her hands stuck inside the guts of a chicken, but thinks me having my hands covered in motor oil is gross. I don’t get it.”

Lateiner asserts that it’s tough to do a job when you don’t see anyone else doing it. But the Internet is changing things, and Lateiner does her best to flood the web with images of women working on cars. According to her, that’s the best way to get young girls interested. “The more they see other women in the role, the more easily they can identify and see themselves.” There are about 20 to 30 female-owned shops in the U.S. that Lateiner knows about, but they’re woefully short on press.

Facebook groups are another way to get the community going, says Rebekah Fleischaker, owner of CarChick.com and a mechanic in the Los Angeles area for over 35 years. “Things have changed a lot since I first started out, thankfully.”

“I think things are slowly changing,” says Hernandez, the VW wrench. When she was at trade school at the Long Beach, California campus of the Universal Technical Institute (UTI) headquartered in Phoenix, she was one of five women to enter her automotive technology training program. A little over a year later and that number had doubled. It was a proud moment for her to see there were more women enrolling.

Just because you’re a dude doesn’t mean you automatically know how a transmission works. Lateiner says, “There are a lot of men who know nothing about cars, and sometimes they find it easier to talk to a woman about what’s going on than admit to another man they don’t know a rod from a ring.”

Fleischaker contends that her communication skills might actually make her a better mechanic than a man. “The more questions I ask, then listen to what my customers are telling me, the better diagnostician I am. Women are wired differently than men in that way.” A broad-sweeping stereotype, perhaps, but not long ago this author was at an auto parts store, and I asked for help finding a part from a clerk. The man I was with blanched. When I asked him why, he said it was because he always wants to figure it out for himself. Maybe it’s okay to ask for directions sometimes?

Of the 10,900 students currently enrolled across UTI campuses, only about 275 of them are women.

Whether it’s true or just her perception, Hernandez believes she’s more closely scrutinized than her male counterparts. So she’s become adamant about double-checking her work before getting a car back to her customers. And if she has a question, she’s not afraid to ask about it. Measure twice, cut once.

So, what is it that keeps women from pursuing the career? Lack of interest in cars? Women aren’t mechanically inclined? The auto industry is male dominated and it is too intimidating to swim upstream in it like a flopping salmon?

Kimberly McWaters, CEO and Chairman of the board at UTI, who worked her way up to her current position from that of receptionist in 1984, believes those are some of the strongest factors. She sees firsthand the small numbers of women seeking professions in the automotive repair world and asks herself these questions daily. Of the 10,900 students currently enrolled across UTI campuses, only about 275 of them are women. Seventy percent of these are first-generation students, and 13 percent are military veterans. She wants to see more women take interest.

McWaters feels there is indeed a change coming. As automotive technology advances, engines are evolving from greasy fuel burners to being modern, computer-controlled machines. She believes that will grab the attention of women open to an industry that suddenly looks completely different. No one will have to worry about getting their fingernails dirty. “The conversation is about to change drastically,” McWaters claims.

As the nuts-and-bolts dialogue changes so does the social one. Diversity is on the tip of everyone’s tongue these days. “Employers want more women, and we know how well they do,” says McWaters.

In the year 2024, the U.S. Department of Labor projects that there will be more than 1.2 million jobs in the automotive, diesel, collision repair, motorcycle, and marine industries. To meet the demand, the transportation industry will have to fill more than 37,000 technician job openings on average every year. That’s a lot of opportunity, ladies.

So, fire up Google, or log into Yelp, and find yourself a Ms. Mechanic. She sure won’t mind getting oil under her fingernails, and she just might be the best thing that ever happened to your car.