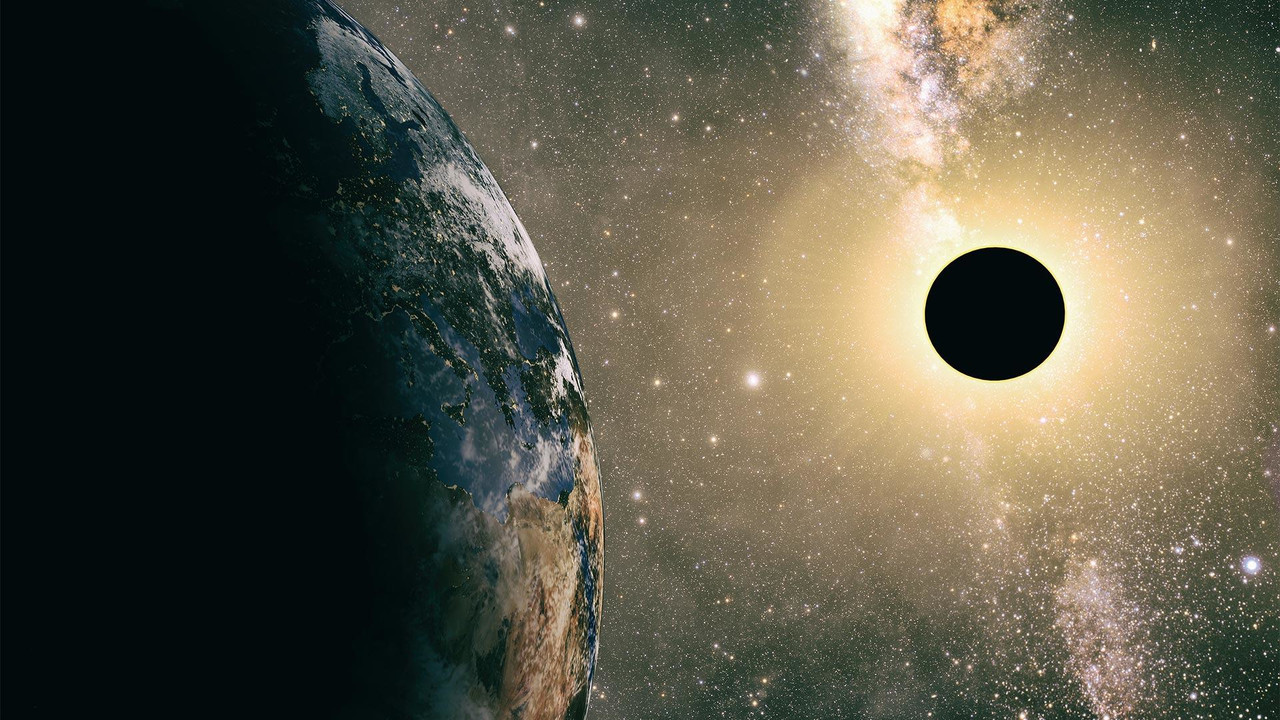 On August 21, a total solar eclipse will cut a swath across the entire U.S. for the first time in 99 years, and for most of us it's only a nominal road trip away.

Come August 21, millions of Americans will step outside and watch the sun disappear from the heavens in what will look like a giant ring of fire. While this may have caused a considerable degree of consternation among uncivilized humanity who no doubt wondered if the gods had turned off the lights and gone elsewhere, we know this to be a natural occurrence called a total eclipse of the sun.

Specifically, it occurs on those rare occasions when the moon passes between the earth and sun in an alignment astronomers call a “syzygy” (a word that’s good for 25 points in Scrabble, by the way). The skies will begin to darken as the sun shrinks, and will blacken completely, surrounded by the signature corona, for two or three minutes across a 70-mile-wide swath (known, ominously, as the “path of totality”) that runs from Salem, Oregon, to Charleston, South Carolina. This is the first time in 99 years the bulk of the country will be in the path of a total eclipse, and it won’t happen again until 2024.

Sure, you can stay home, watch it on TV, or catch a partial blackout depending on how far north or south you live. But like a good concert, a total solar eclipse is best experienced live. Fortunately, with the full brunt of the cosmic cover-up cutting more or less through the middle of the nation, in-person viewing is, for the majority of Americans, a modest road trip away. Below is our guide to hopping in your car and having the best time on your trip to view the totality.

Let's start off with one bit of essential advice: Do not stare directly at the sun, except for that brief period of totality when the moon completely blocks it out. And don’t even think of viewing the eclipse through binoculars, a telescope, or a camera’s viewfinder, as that will only make things worse. Your ongoing eyesight is at stake, here.

How then, you may ask, does one view an eclipse? The answer is through special-purpose solar filters, which can be either hand-held or incorporated into so-called “eclipse glasses.” TheWirecutter.com consulted with astronomy experts and tested 10 solar eclipse viewing devices, and determined the Celestron EclipSmart 2X Power Viewers are best for viewing the big blowout. Essentially highly filtered paper binoculars, they’re inexpensive ($10 for a two-pack from REI) and offer just enough in the way of magnification to heighten the experience.

The mother of all websites devoted to Solarfest 2017 is, as one might imagine, maintained by NASA. In addition to all things celestial, the site features maps of all 14 states through which the path of totality will carve (or at least graze), along with an interactive map that pinpoints specific times during which the eclipse will occur, both of the full and partial variety, from any point across North America.

But if you're going in for a dime you might as well go in for a dollar, as the old saying goes, and to that end GreatAmericanEclipse.com has created an extensive map of the U.S. that shows estimated drive times to the path of totality from major population centers in the U.S. and Canada. Sorry Nogales, Arizona, your residents will have to spend the longest time of any noted city in America – 20-22 hours – being stuck in a car singing 99 Bottles of Beer on the Wall to witness the full monty. On the other hand, if you live in Salem, Oregon, Casper, Wyoming, Nashville, Tennessee, or Columbia, South Carolina, all you’ll have to do is step outside.

Drive Times to the Centerline of the August 21 Total Eclipse

While just about any point along the path of totality with reasonably clear skies should be a good place to view the heavenly light show, GreatAmericanEclipse.com has posted an interactive map highlighting the best vantage points across the U.S. in which to soak up the disappearing sunlight. If you live in the Midwest, head to Carbondale, Illinois, which is not only home to hard-partying Southern Illinois University and lies a short drive from the magnificent Shawnee National Forest, but it's at about the epicenter of the solar action.

Since hotel rooms will be difficult, if not impossible, to come by at stops along the Total Solar Eclipse 2017 U.S. Tour, camping might be your only alternative. Plus, it’s a great way to lie back and stargaze – in this case during both the night and day. Hipcamp.com is featuring its own picks for the best places along the eclipse route at which to set up camp.

Where to Camp Along the Solar Eclipse 2017 Path of Totality

If you’re not feeling particularly hip, GoCampingAmerica.com features a search tool to help locate camping and recreational vehicle spots anywhere in the U.S., and you can pinpoint them by city, landmark, or park name. The site also allows you to filter the results according to assorted options; if you’re feeling adventurous, click on the “Nude Recreation” box under “Lifestyles.”

If we’ve learned anything from the hapless Griswold family in the National Lampoon’s Vacation films, it’s that any road trip can easily descend into Hell on wheels without the proper preparation.

Fortunately, the venerable AAA has put together a handy online infographic of road trip tips, including travel planning essentials and what to do to ensure your Wagon Queen Truckster station wagon, or whatever you might be driving, will be able to go the distance.

In addition, the AAA has also created a more extensive – bordering on the paranoid – online booklet of advice on how to stay safe and secure while on the road and away from home.

The AAA Guide to Trouble-Free Travel

If you’re going to hit the road to catch the total eclipse, you might as well hit roads that will be more engaging to experience than the usual mind-numbing Interstate highways. The downside is the closer to the path of totality you’ll get around August 21, the greater the likelihood you’ll encounter heavier-than-average traffic. Here are a few of the more noteworthy stretches of pavement that lie within reasonable proximity of the astronomical action:

A solar eclipse is by nature a communal event, so why not make a celebration out of it? In fact, several towns along the path of totality will be throwing big shebangs to commemorate the occurrence with food, beverages, entertainment, and science-minded seminars. The website AtlasObscura.com has documented a dozen of the biggest solar blowouts being held across the path of totality, with information on camping and RV parking for each.

Meanwhile, Space.com features its own list of 13 eclipse festivals in the blackout's sweet spot, ranging from Madras, Oregon, to Columbia, South Carolina, but be aware that some of the events noted in this and the above list require advance ticketing.

Take A Side Trip

Since the solar eclipse lasts for around three hours at the most, with totality only enduring about as long as a commercial break from The Walking Dead, it’s probably a good idea to pad the trip by visiting some nearby roadside attractions, and the more bizarre, the better. Automotive aficionados might want to plot a course for Alliance, NE, which in addition to being in the eclipse’s direct path, is also the home of Carhenge. For the uninitiated, it’s an assemblage of 39 cars and trucks set in a circle and having the same proportions as England’s historic Stonehedge. Except in this case it was built by an artist named Jim Reinders in 1987, and not ancient Druids or, for that matter, aliens.

Another offbeat hot spot for car lovers that will enjoy totality is the Lane Motor Museum in Nashville, TN, which RoadsideAttractions.com likens to Rudolph the Red-Nosed Reindeer’s "Island of Misfit Toys." Among its many vehicular eccentricities is one of three existing prototypes of Buckminster Fuller’s bullet-shaped three-wheeled Dymaxion, and a two-headed 1952 Citroen formerly owned by a French fire-and-rescue team for use when a road proved too narrow to otherwise turn around.

No matter where your travels may take you in search of totality, RoadsideAmerica.com can help you set a course to find some of the nation’s oddest attractions along the way, and they’re searchable by state and city.

What would any respectable car trip be without a proper playlist of songs to help pass the time? If you’re adventurous, log onto Spotify and search under the terms “eclipse” and “sun” to unearth a seemingly endless number of songs, groups, and albums incorporating either word in the title. It gets goofy after the third or fourth unfortunate cover of Total Eclipse of the Heart, but it’s good for a few grins. Otherwise, here’s our list of eclipse-themed songs (and one comedy bit courtesy of Monty Python) that can help set the mood whether you’re on the road or sitting in your own backyard:

If you’d rather not risk the possibility of inclement weather spoiling the view – you can take advantage of a once-in-a-lifetime opportunity to experience the big corona from 35,000 feet. Southwest Airlines has identified a number of scheduled flights departing from Denver, Portland, and Seattle that are most likely to witness solar totality. They'll be providing passengers with special viewing glasses, offering “cosmic cocktails,” and affording the requisite social media engagement from high above the clouds.

The Next Best Thing

Finally, for the sake of those who can’t venture far afield to view the total eclipse in actual reality, Volvo will be sending fleets of its redesigned-for-2018 XC60 crossover SUV to four locations along the path of totality, equipped with special equipment that will record the celestial event in 360-degree virtual reality. They’ll record the heavenly view from Snake River Valley, Idaho, Beatrice, Nebraska, Blackwell, Missouri, and Charleston, South Carolina, and will livestream the images across the globe in partnership with CNN at CNN.com/eclipse.

Have fun, and whatever you do don’t stare directly at the sun.

Know before you go: