Putting the Mercedes-Benz Metris and Sprinter to work 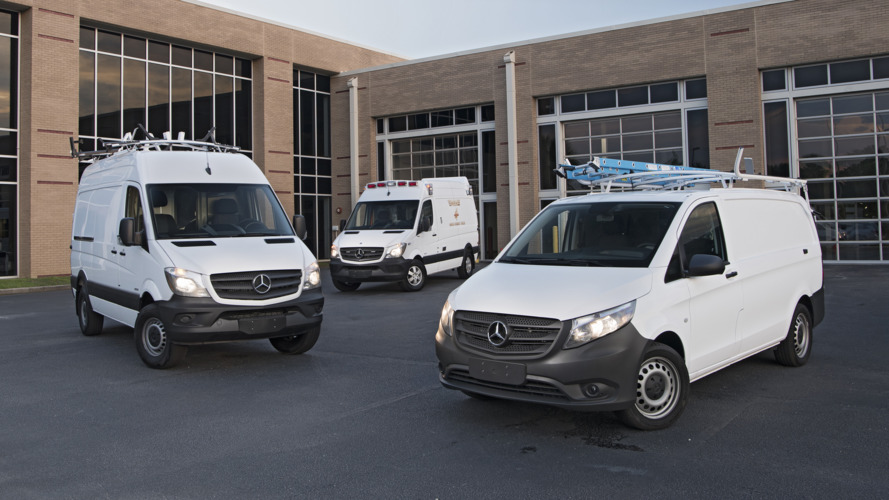 Pretending to be a contractor for the day gives a peek into the world of upfitted and customized Mercedes-Benz vans.

I'm driving around historic Charleston, South Carolina, in a refrigerated commercial van looking for ice cream. The temperature gauge reads just 91 degrees Fahrenheit, but it feels like 106 outside. The air conditioning is cranked to the max, making an icy dent in the sweltering southern heat. I'm playing blue-collar worker for a day, and so far, I'm a natural – or maybe it's just the van.

The Mercedes-Benz Metris van I’m driving has been outfitted by Knapheide, an upfitter that’s been in business since 1848, and one of three featured companies now part of Benz’s brand new MasterSolutions program. The program offers complete, off-the-shelf customizations that can be ordered and picked up at the dealership for contractors and private owners who want to turn their Metris or Sprinter into anything from an off-road camper to a mobile dog-grooming studio. My van packs an electric refrigeration system that can take the rear bay down to 35 degrees Fahrenheit (or 2 degrees Celsius), a system that is typically used by food and floral services for local deliveries. About the size of a large SUV, it also drives much like one as I rumble along streets crowded with sweating tourists in the afternoon sun.

In the early 2010s it was rare to see a van like this anywhere on American roads. Mercedes has made a concerted effort to change that, importing Sprinters as "knock down" (partially disassembled) vehicles, which are then reassembled here in the U.S. to skirt the so-called "chicken tax" on imported commercial vehicles – a tax which traces its roots to a 1960s scuffle over American chicken exports to France and Germany (no really, go look it up). Hoping to take more profitable advantage of the growing market, while avoiding the costly steps of partial disassembly before shipping followed by reassembly in the U.S., Mercedes just broke ground on a 1.1-million square foot plant in North Charleston, South Carolina, where the company will build its vans here from scratch.

Mercedes just broke ground on a 1.1-million square foot plant in North Charleston, South Carolina, where the company will build its vans here from scratch.

My refrigerated Metris costs right around $40,000 including all the various bits and pieces in the back bay. The base cargo Metris starts at $29,945, with a just-announced Metris Worker model coming in at $25,995, plus $995 destination and delivery.

Both versions get a 2.0-liter gasoline four-cylinder engine with 208 horsepower and 258 pound-feet of torque, mated to Mercedes’ 7G-Tronic seven-speed automatic transmission. That’s enough thrust to merge comfortably into highway traffic. Efficiency is a critical factor for businesses that drive these vehicles tens of thousands of miles per year, so the small turbo engine helps keep the van’s ownership costs lower: It’s rated for 21 miles per gallon city, 24 highway, and 22 mpg combined – much thriftier than full-size vans.

Though my Metris is only hauling the weight of the refrigeration system and myself, Mercedes says the van can carry a maximum of 2,500 pounds of payload in the back. That’s a ton and a quarter ton of flowers or flautas. The difference between the Metris Worker and the standard Metris I’m driving is a more limited list of available option packages, like color: the Metris Worker only comes in white. Aimed at owner/operator contractors, these vans can fit conveniently into standard seven-foot-high household garages, provided that you don’t have any additional options (like the refrigeration unit I’m driving) sticking out of the top. Mercedes calls them “right-size vans” and they are slotted, in size, right between the full-size Mercedes-Benz Sprinters and competitors like the Ford Transit Connect and the Nissan NV200.

Mercedes has tried to make these vehicles as car-like to drive as possible.

Next, I hop behind the wheel of the larger Sprinter, the “Mac Daddy” of vans, as Governor Nikki Haley (R-SC) put it (really, those words came out of her mouth) at a groundbreaking ceremony for the new factory last week. Upfitted for an electrician by AutoTruck, a MasterSolutions upfitter, this Sprinter's cargo bay is full of shelves and bins for parts and tools. The torquey four-cylinder diesel engine makes it comfortable to drive both on the highway and in city traffic. With good low-end torque it feels peppy and powerful enough to haul a payload of as much as 5,000 pounds, though with bare shelves in the back, mine only has about 1,000 pounds of payload on board.

At up to 24 feet long and 10 feet high, you might think you’d need to have a special license just to drive the Sprinter. Surprisingly, that’s not necessarily the case. Because these test vehicles come in just under the 10,000-pound weight rating, they didn’t require a Class C license – and that's not a coincidence. Since these vehicles are targeted at consumers and small and large businesses looking for fuel efficiency combined with payload and towing capacity, Mercedes has tried to make them as car-like to drive as possible.

Both Sprinter and Metris are surprisingly easy to drive in traffic and park in tight spots, though the turning circle of each is fairly large.

From the driver’s seat these vans are very approachable, despite the initial size-related intimidation factor. Neither the Metris nor Sprinters I drove featured back up cameras or a rear-view mirror. Lane changes at 70 miles per hour in a giant's bread loaf? A bit trickier than in your grocery getter. Once you’ve done it a few times, however, it becomes much more instinctual. I did have to double- and triple-check my side view mirrors, with a look over my shoulder for good measure, to ensure I wasn’t going to unknowingly merge into another vehicle’s path. I also needed some outside help to backup both vehicles in a tight parking lot.

In both the Metris and the Sprinter I found excellent visibility both forward and back, as well as to the sides, thanks in a large part to two large side-view mirrors, each flanked by a smaller convex mirror for wider field of view, and a vast windshield. The high and upright driving position in both cabs also contributes to seeing the road so well, though it feels a lot like driving a bus, putting you almost directly over the nose of the vehicle. That position makes it easy to get a sense of the four corners of the vans on the road. Both Sprinter and Metris are surprisingly easy to drive in traffic and park in tight spots, though the turning circle of each is fairly large. The Sprinter needs up to 54.6 feet, and the Metris needs as much as 38.7 feet, to get turned around. Both cargo versions have no rearview mirror (though one is available as a $50 option in the Metris), so if you do decide to spring for one of them, opting for the upgraded rearview camera is definitely something I’d suggest (it’s a $657 option on Sprinter Cargo.) Unless, of course, you plan to ask strangers for help backing up every time you need to.

Not all of America is urban, however, so open-road manners matter, too. Fortunately, both Sprinter and Metris both come with standard Cross-Wind Assist – a feature I found very helpful as I crossed the gusty Arthur Ravenel Bridge on the road to the Port of Charleston. The feature uses braking and the ESP system to help keep both the Metris and the Sprinter flat and stable in higher cross-winds, a major factor in the comfort of driving a larger cargo vehicle long distances every day.

The interiors of both the fullsize Sprinter vans and the Metris cargo vans are spartan but roomy.

In more ordinary comforts, the interiors of both the fullsize Sprinter vans and the Metris cargo vans are spartan but roomy, and fitted with the essentials that make a long work day in the cabin tolerable, but little more. The dash is hard, durable plastic and has a simple-to-operate infotainment system in the center. The graphics are clear and straightforward, and the large screen is easy to see in bright sunlight. I tried out the standard four-speaker AM/FM stereo in the Metris van I drove, and it offered a surprisingly warm tone and encompassing sound.

There are plenty of cubbies that come as standard, located in really convenient places around the cabin, in both the Metris and the Sprinter. The floor space between the driver and passenger seats is roomy enough to put items like large bags and hard hats – just as I did after leaving a tour of the Port of Charleston, where the Sprinters and Metrises enter America as parts. There are also convenient storage spots above the visors on both the driver and passenger sides of the compartment, which are a perfect spot for papers and sunglasses as you hop from place to place. The seats are comfortable, captain-style chairs, available in cloth or optional leatherette, depending on how fancy you want to get – or, perhaps, how hot summer gets where you live.

It’s clear why Mercedes has decided to invest in a new van plant in the U.S., and why sales are up more than 16 percent year-to-date.

It's not all work and no play with the new vans, either. For those looking to go adventuring with these efficient, flexible Euro-vans, upgrades available through the MasterSolutions Program and the complimentary MasterUpfitters program offer impressive options, raising the interior fit and finish inside Sprinters and Metrises to truly luxurious levels. I crawled around inside an Airstream-upfitted Sprinter camper van that came complete with a bathroom and shower, sleeping space for two, and a full kitchenette. The interior space was wood-paneled and had leather seating. The build looked comparable to the interior of some of the yachts I've seen, though with a commensurate $100,000 price tag.

After spending the day bouncing from business to business around Charleston, on the hunt for ice cream, getting a taste of what it might be like to be a real contractor making stops across the city, it’s clear why the van business is growing both with individual buyers and businesses. It’s also clear why Mercedes has decided to invest in a new plant in the U.S., and why sales are up more than 16 percent year-to-date. These vans are comfortable, hugely practical, easy to drive, affordable, capable, and so completely customizable that the only limit on what you can do with one is your imagination or your wallet. 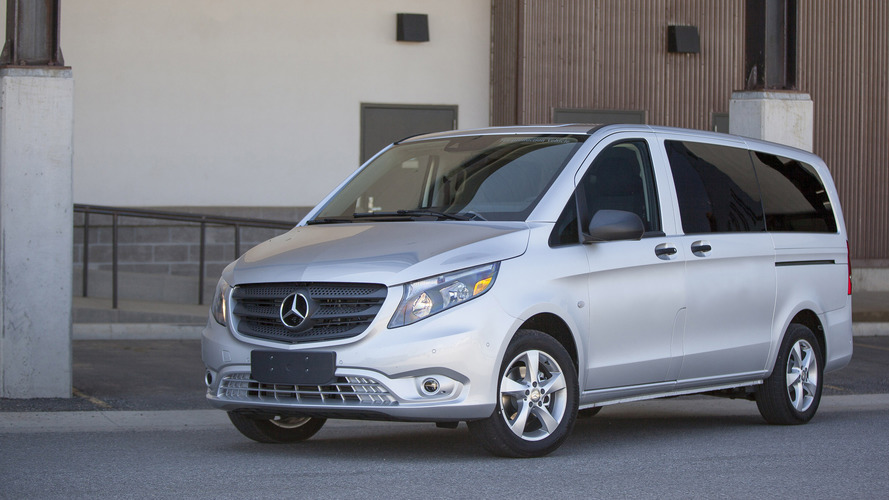