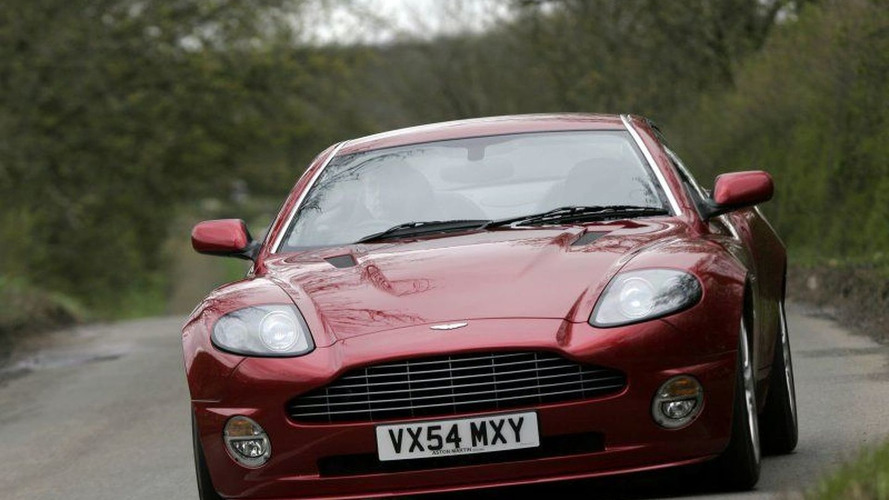 But nothing's perfect. Live with a supermodel and you will find they pass wind in bed, pick their nose or start stupid fights after snorting copious amounts of Cocaine, allegedly. Even fantasies have problems and the Aston is no different.

Beauty may be in the eye of the beholder, but only the seriously visually impaired, or criminally insane will fail to appreciate the supermodel looks of the Aston Martin Vanquish S.

It’s an achingly beautiful machine, never before has a car, any car, attracted quite so many camera phone-toting neighbours and relatives pressed against the window and stroked the seats. It would have been embarrassing, had I not done the same thing myself.

There’s none of the race hate that goes with a Ferrari, Porsche or BMW either, only admiring glances, smiles and respect. Drive one and all manner of doors will open.

Aston Martin is an institution in England and everyone loves them, in part due to the haphazard way the perennially poverty-stricken marque would, ever so rarely, spring a stunning yet painfully flawed car that everyone knew wouldn’t work but wanted anyway. Each car takes 400 man hours and is still built at Newport Pagnell, the original factory, and the panels are made by men with hammers, not robots.

And then there was the James Bond factor, which has ‘inspired’ 1000 near comatose articles from journalists in rented dinner jackets.

The sense of occasion is undeniable, and it’s easy to get sucked into a fantasy. The Vanquish S is big, imposing and visually stunning, with the sleek, animal lines erupting forward from those muscular haunches towards the open, aggressive mouth at the front end.

Other luxury marques, including the last bastions of good taste, Bentley and Ferrari, have now produced imposing rather than beautiful GTs, in the same way as a female shotputter. But Aston Martin’s chief, Dr Ulrich Bez, can talk for hours about sensual car design. The Vanquish S is the peak of his craft and makes both Ferrari’s 575 and 612 look ungainly and, from some angles, plain ugly.

And behind the meaty steering wheel emblazoned with those gorgeous wings, snuggled in to the handstitched sports seats with the custom-built Linn stereo system singing loud, the tale goes on. A quilted roof lining and a dash shrink-wrapped in even more leather clearly prove that a lot of animals died for this car. Judging by the switchgear, so did a Ford Focus, but it doesn’t detract from the overall experience.

But this car comes to life when you push that jewel of a starter button and give the six-litre V12 its head.

The Vanquish S produces 520bhp and 425lb-ft of torque in this guise. But it’s the deep, guttural roar that kicks in as soon as an indecent amount of right foot is deployed, with the traction control struggling to keep the 19” rear wheels spinning out of control, that leaves the lasting impression.

Yes the V12 started out as two Mondeo V6s strapped together, but the sum is far greater than the parts and this engine provides arguably the sexiest sounds in motoring.

The big beast charges past 100kph in 4.2 seconds and accelerates from 80-110kph two seconds faster than the Vanquish. That’s good for overtaking, and it’s also a lot of fun. Put the pedal down in almost any gear and the Aston effortlessly punches down the road.

New cylinder heads with fully machined inlet ports and a variety of other engine and exhaust mods have increased the power output from the Vanquish's 460 bhp. Torque is also up by 25 lb-ft. In fact the figures have now just crept past those posted by the Ferrari 575M, which is obviously no coincidence.

Its officially the fastest ever Aston Martin with a speed in excess of 200mph, but at 1875kg it takes a while to get there. The average Aston Martin owner is unlikely to test the top speed in any case, and it’s still nice to know it can get there.

The car certainly scythes into bends willingly for such a big car and with that much power on tap it would be a simple matter to send the tail out of line and balance this 1875kg car on the throttle out of hairpins, should you have the nerve to disengage the electronics, while in high speed bends it feels calm, assured and planted to the floor.

The ride is much harder than the DB9, thanks to a more sporting set-up. It will still soak up the bumps at town speeds, but at speed takes on a keener edge and the chassis seems to stiffen up to match the bristling roar of the engine. The car skips off bumps, rather than absorbing them, and the suspension gets tougher the more you lean on it. It’s no Ferrari F430, but it’s not that kind of car,

It’s hugely comfortable inside the Vanquish S, too, with luggage space and all the usual accoutrements for the rich to enjoy a cruise down the boulevard or a long distance journey down to the coast, whichever coast that may be, in absolute style.

But nothing’s perfect. Live with a supermodel and you will find they pass wind in bed, pick their nose or start stupid fights after snorting copious amounts of Cocaine, allegedly. Even fantasies have problems and the Aston is no different.

The paddle-shift gearbox is a massive improvement on the recalcitrant DB9, but it’s still no match for Ferrari’s F1 tuned system and the lack of a manual option is a sheer frustration here. If this car came with a six-speed manual box and a meaty clutch it would have become an instant classic and one British tuning company is working on it now. It’s a shame that you don’t get the choice when you’re spending £174,000.

Like a supermodel, too, I couldn’t leave it alone anywhere and ended up recruiting guards when I was forced to park it overnight in the most secure place I could find, the local underground car park.

And the Aston has another problem: its own family. The DB9 and especially the AMV8 are such fantastic cars in their own right, will both snap knicker elastic at 100 paces and are so much cheaper that the maths just doesn’t add up.

Any Aston has the same effect and the AMV8 is perhaps slightly less ostentatious. It lacks the V12 noise, but it’s a more enthusiastic sportscar and gives far more bang per buck.

So if the supermodel had a younger, equally beautiful sister that was more fun, was happy going for a steak rather than overpriced sushi and was, ahem, a more enthusiastic ride, which one would you take?

For some it’s all about the prestige, they date models, they wear a Rolex and they drive a Vanquish S, that’s the point of this car. Like a girl charging £10,000 a day to prance down a catwalk you can’t justify it in pure terms, but the Vanquish S is the best of its breed and an attention-grabbing supermodel. And for plenty of people in this world, that will always be enough.