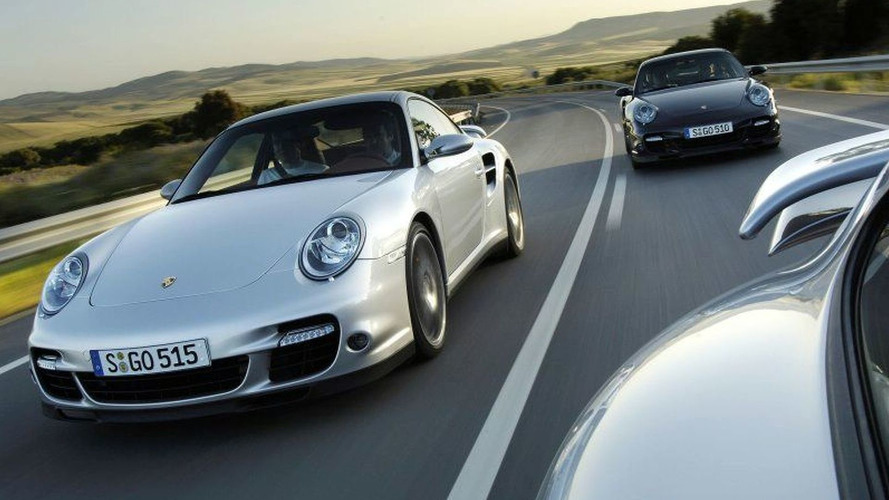 Our journey with the 911 involved a passenger ride with Porsche ambassador and former rally great Walter Rohl at 230kph. He flew up a secluded B-road without once getting sideways, that's the way to drive it quick...

The Porsche 911 is a basic concept that has been with us for four decades, and there’s a reason why each new incarnation brings new eulogies for one of the few genuine icons. The 911 Turbo, born in 1974, is the flagship, loaded with technology, four-wheel-drive, creature comforts, every day usability and ballistic performance.

It’s more user-friendly as any Porsche, can cover a continent in relative comfort and can still wipe the floor with almost any car on the planet in a competitive contest. The 911 Turbo is the shining example of an every day supercar, and the best has just got better.

This is now the most powerful car in the 997 line-up, with an epic 480bhp and 502lb/ft of torque with the Sport mode engaged with the optional Sport Chrono package we tested. And that provides acceleration that will leave pretty much everything in its admittedly exclusive class for dead. The 60mph mark falls in 3.7s in the quickest version, which is, strangely, the automatic.

Porsche has developed Tiptronic S to such an extent that the two-pedal variant with a five-speed auto box that can be controlled with a rocker switch on the wheel is much the faster through the gears.

The manual version is 0.2s slower to 60mph, but is so much more intuitive on a winding road that it has to be the one to go for still, though. Both versions max out at a more than respectable 193mph, which puts it into the rarefied company of the Lamborghini Gallardo and Ferrari F430.

At €110,000 + taxes, it’s hard to describe the 911 Turbo as a bargain, but against its more temperamental Italian rivals that can surely only be described as weekend toys, it’s certainly a more cost effective supercar. And while the 911 shape is so imprinted on the masses that this one won’t get quite the attention it might deserve, most owners generally prefer it that way.

The jeweled indicators on the front end bring a little bling to the new model, but otherwise it’s merely an evolution of the much-loved 911 shape. The rear wing raises at 120kph to add to the downforce at the rear, but at low speeds it sits stylishly out of sight and this is undoubtedly a conservative car – the black Hugo Boss suit compared to the flamboyant Armanis of this world.

The 3.6-litre engine boasts 60bhp more than its predecessor, and a raft of new technology, including variable geometry turbocharger technology previously only seen on the much slower diesels. Here it all but eliminates turbo lag, and the acceleration of the Porsche has to be felt to be believed.

With the slightest encouragement the famous six cylinder and twin turbochargers go to work, flinging the car down the road, the exhaust note hardening to a rasping, hissing crescendo. The flagship Porsche is a unique animal with its own tone, attitude and attraction.

It’s easy to run into the rev limiter in the first few gears, but smooth it out and the Porsche will hit 99mph in 8.4s and 124 (200kph) in 12.2s, which is fast enough to post your kidneys through the seat. There is power to spare in any gear, and it will trickle round town in sixth on a thimbleful of throttle, but it lives to let fly on the backroads.

In the corners, the grip on offer was true Physics defying stuff for a car with the engine in the back – theoretically an impossible layout for a sports car. Early 911 owners put bags of cement in the front end to stop their car’s spinning, now you’d be hard pushed to find this car’s limits without a wet track and a whole heap of bravery.

Our journey with the 911 involved a passenger ride with Porsche ambassador and former rally great Walter Rohl at 230kph. He flew up a secluded B-road without once getting sideways, that’s the way to drive it quick, but if you want it’s easy enough to flick the back end out to a certain degree before the power feeds to the front end and the Porsche Stability Management system kicks in to mop up the mess you might possibly have made.

And that means opposite lock is an easy feat in this car, which is why the purists prefer the normally aspirated, more track focused GT3 or ultra hardcore GT2. But if it’s easy thrills you’re after, this is the car you want.

It can feed all of the power to the front axle if the rear gets to an angle that would have previously ensured a backwards trip through a hedge, while the Porsche Stability Management can also apply the brake to each individual wheel once the rear has drifted beyond a certain point. It’s a confidence-inspiring, exhilarating car, one that could turn even the most casual car fan into a dedicated B-road blaster.

Though powerful and packed with the new technology, the new 911 Turbo weighs in at just 1660kg. For a car that is so cosseting and with rear seats just about justifiable for children, that’s no mean feat. This is a machine that simply cannot be found lacking in any department and the interior feels as refined as any saloon at sensible speeds.

And by unlocking the secrets of electronic damping control, Porsche has finally cracked the code and turned the 911 Turbo into the most comfortable cruiser in its class and ultimate racing car for the road in one nimble package. With the dampers on the soft setting, it won’t hang on so well in the bends but the Porsche will soothe your aching bones for hundreds of miles on the roughest of roads.

Freed from the need for one answer to ride and handling, though, thanks to its PASM switch, effectively another Sports switch for the suspension, the car hunkers down into bends like a thing possessed and turns into a borderline track car.

Braking comes courtesy of massive six-piston calipers at the front and four-pistons at the rear all clamp on to 350mm discs, and if you’re prepared to pay a hefty upgrade fee you can have the ceramic units that turn this machine into a world beater. The steel brakes felt a more natural match for general road driving, though, as even thinking about touching the middle pedal threatened to stand the car on its nose while getting use to the ceramic stoppers and send anything not nailed down through the windscreen.

This is not a hard car to drive, though, the clutch and gears are as forgiving as anything on the road and the steering assisted to a perfect degree. The 911 Turbo will flatter any driver,

The Porsche 911 Turbo was always the ultimate daily driving supercar, and the new 997 model has taken the game to another level. With no obvious rivals in its price bracket and a whole host of advantages over more expensive Italian fare, the 911 Turbo once again sits on top of the tree as the definitive modern supercar.

If we could afford it, this is the car we would all drive. It really is as simple as that.