It’s not exactly the supercar of minivans, but the Pacifica is still rather super.

Let me start by saying: The day I was handed the keys to the 2017 Chrysler Pacifica was the same in which I’d given up the keys to the 2017 Audi R8. There may or may not have been some mumbling about my cold, dead hands… From the standpoints of sex appeal and visceral thrills, this was clearly a step backwards. But from the perspective of interesting, mass market-relevant vehicles, it’s hard to score higher than Chrysler’s swing-for-the-fences people hauler.

Make no mistake: the success of this replacement for the Chrysler Town & Country is mortally important for a brand that currently sells just three vehicles. And the company has seemingly packed all that it’s learned in four decades of minivan building into this Pacifica.

Utility and versatility are the hallmarks of the Pacifica, specifically as they apply to keeping a car full of human beings comfortable and entertained (and hopefully, quiet) over long hauls. The comfort quotient has been addressed in a number of ways, but the most straightforward is with raw interior space.

Motor1 readers are tired of reading it (or watching me say it), but I’m a six-foot, five-inch man who doesn’t fit neatly into your typical third row. Even my long legs and high pockets have enough space to bear a stint in the Pacifica’s backmost seats, so it's fair to say your sixth-grader’s science fair partners should be cool. There’s more room still in the second-row, three-across seats, though I did manage to bang my knee on the back of the stowed in-seat entertainment screen – better hope those things are durable, Chrysler, because they’re going to take a beating. 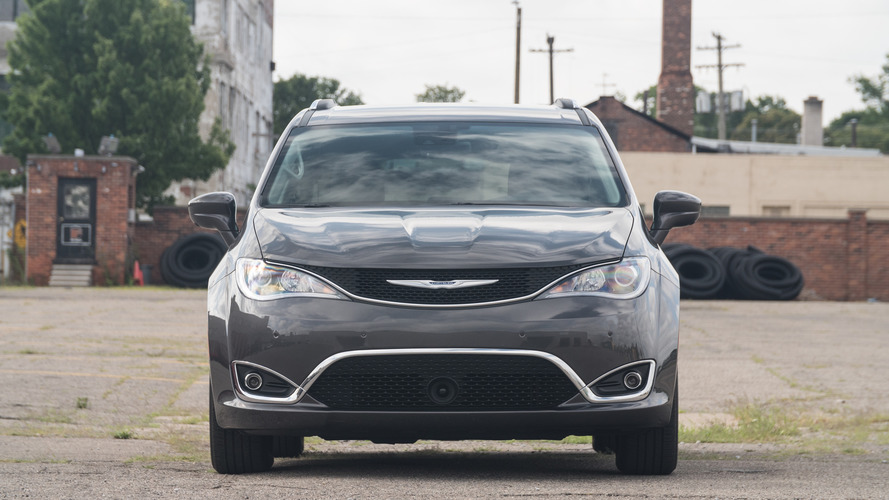 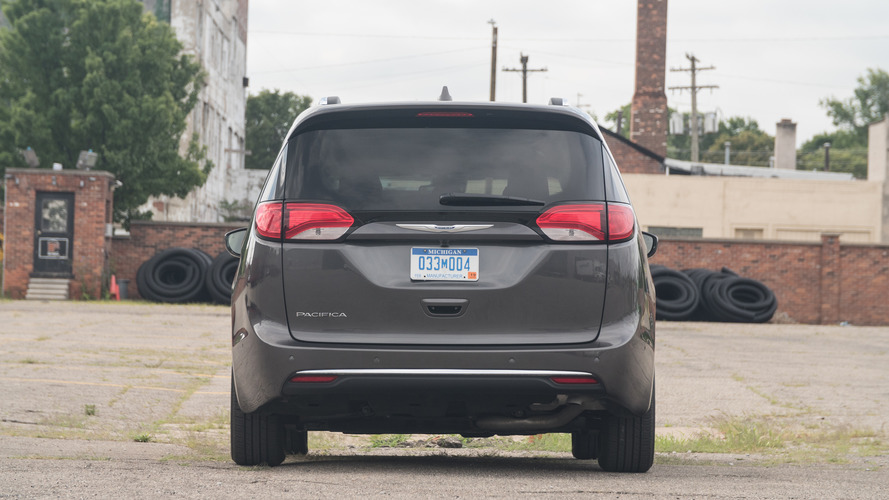 The driver’s seat is great in terms of space, and the driving position less bus-like than you might expect.

The driver’s seat is great in terms of space, too, and the driving position less bus-like than you might expect. Visibility is great all around, and the sightlines aren’t forced by a super-high front seat.

Not a bad seat in the house, then, and none that will get Dad and Mom yelled at from a pouty kid, I’d guess. Yes, this second-from-the-top Touring L Plus tester offers built-in screens for the second row, but Chrysler has provided media agency for just about every chair. Scores of tablet-friendly USB ports can be found scattered around the cabin, including in the third row. There’s also a three-prong, 115-volt accessory outlet to work with, and HDMI and headphone hookups for the second row. There should be no excuse for any digital appliance to go dead in here, and the kids could run a Playstation for those really long road trips. I was born too early.

The aforementioned utility doesn’t simply come in a form fixed for humans, either. There’s room for your stuff. The cargo area isn’t vast with the third row erected, but designers have created a deep well of space back there, meaning there’s more vertical room, and a really convenient space to pack grocery bags without them falling over (no one likes chasing rogue clementines after opening the hatch). Because this is a Chrysler minivan (even if it does have the wrong name), the seats are simple to manipulate, too. Stow ’n Go seats are basically one-touch down in operation, and open up a maximum of 140.5 cubic feet of cargo space. Just remember to put an old sheet down before you pick up the mulch, or you’ll be vacuuming forever. 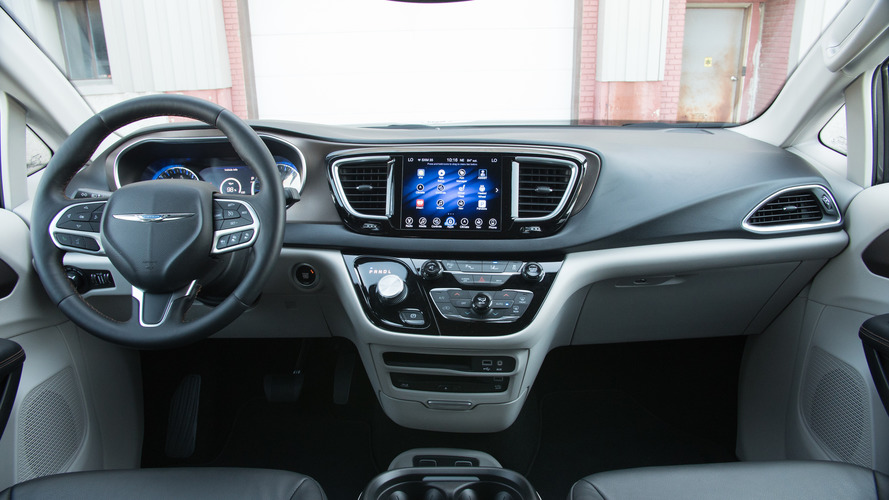 The interior is seemingly able to handle the daily grind of Cheetos dust, Gatorade splash, and your general little-kid effluence.

On that front, the interior walks a nice line between feeling pretty upscale and still seemingly able to handle the daily grind of Cheetos dust, Gatorade splash, and your general little-kid effluence. The dark leather helps in this cause, of course, but even the contrasting, cream-colored panels seem very wipeable. Granted, I don’t have kids so I’m an optimist by default, but I do spill a lot of soup on myself; your mileage may vary.

Oh, and there’s driving stuff! Seriously, the most important notes about driving the Pacifica are unexciting by their very nature. That is, the car is mostly smooth and quiet, but without being so smooth and quiet you’d confuse it with a luxury car. There’s a bit of wind noise if you’re driving along alone with your thoughts and the radio off, and a mild amount of thrum from the tires, but nothing that your typical sibling squabble couldn’t immediately drown out. Similarly, the suspension feels very sorted for isolating one from harsh surfaces, and yet will do nothing at all to stop the vibrations from a three-year-old kicking the back of your seat.

Chrysler found its do-everything 3.6-liter V6 just right for this application, and it pairs well, for once, with the company’s nine-speed automatic. I’m not sure what’s been revised here versus all the Jeep products I’ve sampled with this automatic, or if I was just driving very smoothly, but the nine-speed’s constant hunting behavior seems to have been nixed in the Pacifica. All those gears no doubt help the Pacifica attain its very competitive fuel economy numbers, too: 18 miles per gallon city and 28 highway being at or near the top of the class versus Honda, Toyota, and Kia.

The tried-and-true Pentastar V6 didn’t hold a candle to the Audi V10 I’d previously been driving and enjoying – immensely – but its 287 horsepower and 262 pound-feet of torque were adequate for kicking this baby bus up to highway speeds. I strained the motor towards the top of its 6,400-rpm redline a few times, which isn’t really a recommended practice, but I did find a tiny little growl from the exhaust around 5,500. Come on Mopar, man-van this thing up.

Styling is strong enough that you might even convince some Millennial parents that it’s a reasonable family vehicle.

The bottom line here is that Chrysler is teed up to sell an awful lot of these things. The exterior styling is strong enough that you might even convince some Millennial parents that it’s a reasonable family vehicle, and I certainly believe that quite a number of utilitarian grandparents will give the Pacifica a happy home, too. It’s a fetching van that ticks all of the practical boxes.

Pricing seems high… until you reacquaint yourself with the cost of the minivan market these days. Pacifica starts at right around $29,000, this high-trim model asks around $38K, and the sticker on my test car is a healthy $43,765. It’s not crazy to spend over forty grand on an Odyssey or Sienna these days, and you won’t get the bleeding edge Pacifica design in the bargain (though you will get better residual value, if you’re thinking about buying outright). Trim levels and stand-alone options make the Pacifica super-versatile in terms of final kit, which goes hand in hand with the Swiss Army knife persona.

Don’t get me wrong, the R8 was a hard act to follow. But eventually a guy’s gotta buy more than a day’s worth of groceries at once, you know? For that, and an uncountable host of boring driving chores, Chrysler has the truly super car, even if it’s actually a minivan.