Powertrain and new trim updates provide the Quattroporte new capabilities, but not a new personality.

Sicily is on fire as I arrive on the island for a first crack at the 2017 Maserati Quattroporte. That’s not a metaphor for the hot-headed stereotypes I’ve been lead to believe about the habitantes of the landmass that’s being kicked by mainland Italy. The combined effect of triple-digit temperatures and double-digit winds are causing fields to burn and a haze to form over the horizon – much like a marine layer, but much less beautiful. Schools are being evacuated. Major thoroughfares are being blocked off by policemen on motorcycles. Against the large, craggy mountains just outside the Palermo airport, the miasma of scorched earth and exhaust fumes is a curious first whiff of life in the simmering aperitif that is life in Italy.

The weather situation hardly seems to bother the legion of drivers in tiny hatchbacks battling it out on the highway leading to the Palermo city center, who have a move-it-or-lose-it approach to driving. A middle-aged woman in a tiny three-door of unknown origin appears to have one hand on the wheel, one hand gesticulating in the air while she screams into her phone, one hand on the shifter, and another holding a bottle of water. She’s doing about 95 mph, or “reasonable and prudent” for the area. The driver of a Fiat Ducato is slowly wobbling between two lanes of traffic. Passing is a maneuver that begins with rabid, sustained tailgating, until the driver ahead can’t take it any longer. There’s very little horn honking, even as the roadway empties onto an exit ramp, and five lanes turn to three but are occupied six cars across. Did I mention that much of the island is on fire?

As I contemplate how I’m supposed to wheel a Maserati the size of a BMW 7 Series around these streets, it occurs to me that there aren’t any other Maseratis around. The brand that steals just a slice of a sliver of voice in the United States, among other markets, has equally limited share here, its home market. There’s something beautifully unrefined about Maserati, a company that hasn’t been sanitized by Germans or mussed up too much by the Americans.

There’s something beautifully unrefined about Maserati, a company that hasn’t been sanitized by Germans or mussed up too much by the Americans.

It’s been about three years since the company introduced the sixth-generation Quattroporte, the larger of Maserati’s two-sedan lineup with a name that harkens back to a time when it would be rare for there to be a four-door Maserati. A subtle update was due, yes, but Maserati sought to make it as seamless a transition as possible to an updated model. Maserati does what it wants, like keep the Quattroporte pretty much the same, because it can afford to. The Quattroporte in its current form was working for Maserati, simply put.

That explains the superlight refresh to the Quattroporte, led by a sharper grille restyled to look like that of the recently released Levante sport-utility vehicle. Both the biturbo V6 and V8 engines return, as does the option of all-wheel drive. The creation of two trim levels, GranLusso and GranSport, is meant to distinguish 2017 Quattroportes and beyond, but just looking at a ’17 Quattroporte, you’d be hard-pressed to know which engine is under the hood, let alone the trim level. The GranLusso is the more attractive of the two, featuring Ermenegildo Zegna silk as an interior adornment, but the material differences among all Quattroportes are slight. The car hasn’t gotten any more beautiful, either, retaining the haughty swagger of its current styling cues. The sedan deserves to be gorgeous again, like its predecessor was. A Maserati ought to make you weak in the knees when you see it.

In the eyes of everyday Sicilians, the Quattroporte is a status symbol, representing smug superiority with the performance capability to back it up. Leaving Palermo toward the province of Trapani, accompanied by a police escort, traffic parted for the group of Quattroporte test cars. It’s one thing to see a Quattroporte, but a group of them – the technical term for a group of Maseratis traveling together is “mob” – demands respect. On narrow streets, the Quattroporte acts and feels its size, even when equipped with the 3.0-liter, 410-horsepower V6, taking up the width of entire alleyways. It’s best to leave the city with a sedan with this kind of footprint.

The Quattroporte is a status symbol, representing smug superiority with the performance capability to back it up.

I started the day of driving in the Quattroporte S Q4 with all-wheel drive, and it was immediately apparent that, despite its size, this Maserati is no Mercedes-Benz S-Class. The engine note was operatically gruff, with enough sound to act as a pleasing substitute for the V8. Every so often, the highway would open up and a quick tap of the accelerator would send the Quattroporte to semi-legal speeds. Shifting the eight-speed automatic transmission for myself, with the paddles mounted behind the steering wheel, made me feel like I was in a sports car, not a limousine. Call it a transcendental experience, or the lingering effects of late-onset jet lag. Steering is lighter than you might expect for a beast this large, making the Quattroporte a more competent straight-line performer on highways or side streets. Suspension tuning is best described as sporty.

The back roads leading from Trapani connected with the E90 highway, where it was back to circumspect disregard for speed limits and relentless cat-and-mouse traffic games. Over the expansion joints, the Quattroporte’s body shook frequently, leaving the occupants (my co-driver and myself) to absorb the vibrations. A consiglieri relaxing in the back seat would have a glance or two of disapproval. On the plus side, Maserati has addressed the gravamen that its products feel too much like Chrysler hand-me-downs inside, by fitting a classy glass screen for its infotainment system that now incorporates Apple CarPlay and a wi-fi hot spot. The interior is still sumptuous according to an older kind of luxury, one that favors leather everywhere and the occasional, tasteful accent material. 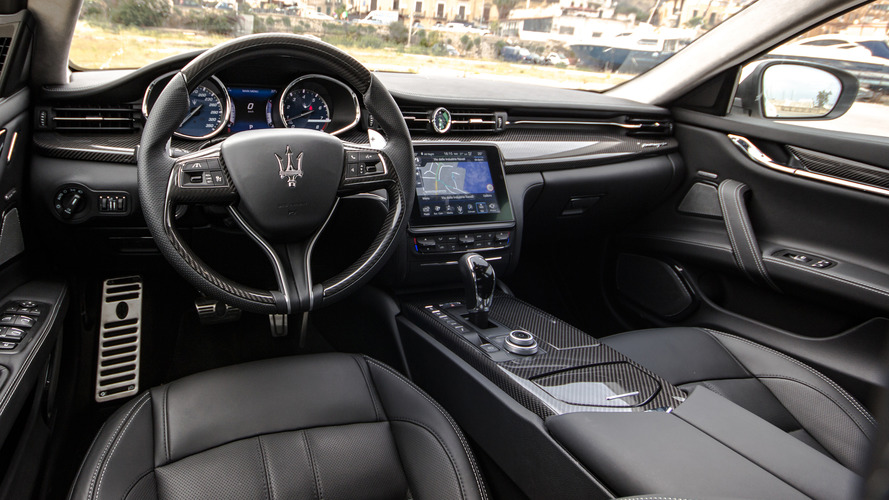 The interior is still sumptuous according to an older kind of luxury, one that favors leather everywhere and the occasional, tasteful accent material.

Over the course of the morning, I scanned the speedometer as often as I did the fuel gauge. Efficiency is still not part of the persona that Maserati wants to translate from Italy to the U.S., despite a common-rail turbodiesel being available in other markets. I played a bit with the adaptive cruise control and some of the new driver assistance features, but enjoyed driving the car much more than being kept in the lane by a nanny sensor.

In the afternoon, having barely digested more fresh pasta and a salad of sliced, farm-fresh tomatoes, I decide to take out the Quattroporte GTS, the remaining Maserati sedan with a 530-hp, biturbo V8 under the hood. The top-of-the-line GTS is available only in rear-wheel drive, for now, and while it’s essentially the same car as its siblings apart from its engine, it embodies a contrasting persona. The Quattroporte GTS is the boss of the family, with much heavier steering and gas pedal that practically begs to be hit harder. If you step on the throttle with any amount of gusto, the revs will climb higher, and the rear tires will break loose almost instantly. Even an AMG-prepped Benz would control those kinds of behaviors.

Naturally, I got lost on the way to the beachfront area of Capo Gallo – my sense of direction is up for chance in foreign countries – and ended up lost in the seaside town of Modello. In most scenarios, I would have looked like a helpless tourist. But circling the block in a Quattroporte is accompanied by a distinct, mafioso feeling, a shark swimming in pursuit of weaker fish – despite my short sleeves and confused look. Don’t worry: I’m only here to take some photos.

It’s hard to imagine the revised Quattroporte having any real competition, owing to its macho attitude and glaring disregard for the passing of time.

It’s hard to imagine the revised Quattroporte having any real competition, owing to its macho attitude and glaring disregard for the passing of time. Its price is estimated to be no less expensive than the current Quattroporte’s sticker of about $100,000, but that doesn’t mean it’s on the same shopping list as a Jaguar XJ or Audi A8, or the aforementioned 7 Series or S-Class. Those buyers want badge recognition and the luxury that comes with it, less concerned with owning the most bumptious vehicle on the block. By that token, the Quattroporte competes with the similarly sized Cadillac CT6 in absolutely no ways – except, perhaps for legroom and perceived pomp – nor does it really stack up against the Lexus LS 460. In a lot of ways, the Quattroporte’s closest analogue is the Chevrolet SS, a muscle car disguised as a sedan, but Italy’s leading luxury and performance brand would probably have none of that comparison.

Approaching the center of Palermo on the return trip to the staging area, having learned as much about the flow of traffic on the island, I nudge the Quattroporte gently into the rightmost position of the frontage road toward a traffic circle. Instead of the manic speed I expected, everyone is stopped. Five lanes turn into two but there are two cars on either side of me. Sashaying in the Quattroporte toward the middle is of no use; there is no funnel effect. The parking-assist sensors are going wild. The traffic was interrupted by an accident in the roundabout between a tractor trailer and a hatchback. Of course. A second accident, just a dozen feet ahead, was causing even more congestion. There was nothing the sedan with the racing-derived engine could do, that the other cars couldn’t. I exited to the right. Getting back to the hotel unscathed was a stroke of luck. The heat was raging, and not just outside.

I can’t guarantee you’ll feel any of this when you’re stuck in bumper-to-bumper traffic on the morning commute in who-knows-where. Choose to spend some time with this hot-headed Italian, and you won’t regret not choosing a run-of-the-mill luxury sedan.