A 2.0-liter turbo four gives Acura’s hottest hatch at least 300 horsepower, and it’ll only be offered with a manual transmission.

Starting with the 2017 NSX and continuing through the Type S variants of today's TLX and MDX, each successive Acura debut gets the brand closer to the goal of recapturing its “precision-crafted” image from the 1980s and 1990s. And now there’s the aggressively styled and nicely priced Integra, which compensates for its low-ish 200 horsepower with the same light-on-its-feet personality that made us fall in love with the original.

But many critics just can’t look past the somewhat disappointing power rating of the Integra – although the compact Acura five-door is still enjoyable enough for us to put it in contention for one of our 2022 Star Awards. Still, we’re not alone in wishing the Integra had a bit more power and some extra performance verve. Not to worry, because the Integra is the next model to make good on the automaker’s promise to Type S all the things. I got behind the wheel of an early prototype for two all-too-brief laps of Honda’s Tochigi testing oval, but even in that short amount of time, it was clear that this is the car Acura fans have been waiting for.

Acura isn’t sharing full powertrain details or product specifics just yet, saving those for the car’s official debut next year. But I can tell you that the 2024 Acura Integra Type S will come with a turbocharged 2.0-liter inline-four making “more than 300 hp,” mated exclusively to a six-speed manual transmission. If that sounds familiar at all, that’s because the 2023 Honda Civic Type R comes with a similar set of specs – 315 horses and 310 lb-ft to be precise. It seems likely the Integra Type S will match that output, just as the standard Integra matches the Civic Si.

What those numbers can’t tell you is just how exciting the Integra Type S sounds. Exhaling through a hilariously oversized trio of center-mounted exhaust pipes, the Acura prototype idled like an old British sports car, with a booming resonance that promised good things for performance. That suspicion turned out to be accurate as the journalist just before me took off in the Integra with a full-throttle rip through the first few gears – the Type S snarls like a chopsaw as the revs climb. It also sounded great as it flew past on the Tochigi oval’s straightaway, with more small-displacement fury than any Acura product since the bygone Integra Type R. 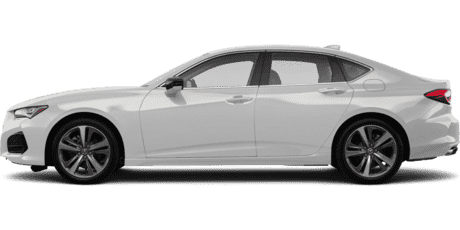 At last, it was my turn to slip behind the wheel. In spite of the added power under the hood, the Type S prototype’s clutch is light and easy to read, and its six-speed manual gearbox is as perfect as the one in the standard Integra. The engine revs more readily than the 1.5-liter turbo in the base car, unleashing its full 300-plus hp in a linear, amateur-friendly fashion – turbo lag is minimal. There’s also some added low-end torque and a standard limited-slip differential, which were both plainly evident as I exited the pit lane and put the hammer down.

The Integra Type S I drove was limited to 125 miles per hour – likely to protect the prototype from a speed-happy journalist – but the production model will likely go faster than the base Integra’s 135 mph. Cruising in fourth gear, I was able to gently lift off the throttle for Acura’s suggested cornering speed of 90 mph, then explode out to hit 125 again in a few seconds. And the Type S’ stability through those banked corners was impressive. Now obviously, I need a lot more seat time than those two left-turn-only laps to make a definitive statement, but it’s clear that the 2024 Integra Type S is going to be much more thrilling.

In addition to driving impressions, Acura is also keeping specifications close to its chest until closer to the car’s debut, possibly at the New York International Auto Show next spring. Apart from the promised turbocharged 2.0-liter and the six-speed manual, we don’t know much else about the Integra Type S. But it’s likely the car will boast adaptive dampers with more aggressive, track-focused settings than the regular Integra. I didn’t experience any torque steer in my time with the car, so it’s possible the Integra Type S will inherit the dual-axis front suspension from the Civic Type R, with stiffer rear suspenders to match.

Obvious on the prototype in spite of its logo-bespeckled camo wrap were distinct wheel arch flares, there to hide a wider front and rear track. I hope those flares are faired into the fenders on the production model, because on the prototype, they look a bit tacked on, but regardless, the hot Integra boasts a hunkered-down stance that looks totally Type S–appropriate. The prototype I drove didn’t feature much in the way of aerodynamic add-ons. There’s a slightly larger lip spoiler on the decklid, as well as a reshaped front bumper and a diffuser in back, but the Integra doesn’t look nearly as aggressive as its Civic Type R cousin.

That subtlety should serve the Type S well as it goes after the Audi S3 and Mercedes-AMG CLA 35. Its mandatory six-speed manual may be a bit less technologically advanced than the German rivals’ automated gearboxes, but that’ll appeal to folks who still want to DIY but would rather have a more mature offering than the bombastic CTR.

Although Acura hasn’t committed to any specific timing, the automaker said the 2024 Integra Type S would arrive next summer. Pricing is unknown, but remember that the current Integra with the six-speed manual – which also requires adding the A-Spec and Technology packages – is $8,100 more than a Civic Si. Hopefully the Type S won’t follow suit when compared to the Civic Type R, which starts at $43,990. A price much higher than $45,000 would put the Integra dangerously close to the $46,995 of the Audi S3 and $48,950 of the Mercedes-AMG CLA 35 (both of which come standard with all-wheel drive).

If Acura can keep pricing in check, the Integra Type S promises to earn the respect of auto enthusiasts everywhere, even ones who may have dismissed the reborn Integra as too slow or too similar to the Civic Si. As for me, I love the current Integra, and the 2024 Type S variant has me all the more excited for both the compact hatch family and the Acura brand as a whole.