On the windswept coastal roads of South Africa, we find excepted grace in the news of Rolls-Royce convertibles.

It’s easy to dismiss a Rolls-Royce convertible as frivolous, the automotive equivalent of a black tuxedo that sits in the back of a wealthy baron’s closet until the proper occasion arises to wear it. Next to the half dozen or more other cars sitting alongside it in the typical owner’s climate controlled, tile-floored garage, the Rolls-Royce is rolling formalwear. And as such, it’s not for every day.

The all-new Rolls-Royce Dawn challenges that assumption. Built on the same solid BMW 7-Series-based mechanicals as the Wraith and the Ghost, the Dawn is only Rolls’ third new convertible model in 45 years. It is not simply a convertible Wraith, though; the Dawn has a winsome character all its own, and after being granted some seat time in an early example along the scenic inland and coastal highways around Cape Town, South Africa, we can imagine its owners not waiting until their next power dinner or red carpet gala to whip out their Rolls. This is a car they can enjoy every day.

Rolls-Royce characterizes the Dawn as nothing less than “the sexiest Rolls-Royce in history,” and it’s hard to argue with that. It may not be the most romantic — the 1952 Rolls-Royce Silver Dawn (this car’s muse, incidentally) trumps it there — but it is certainly sexy. Given its familiar brethren, the Dawn’s styling is predictable, yet most of its sheet metal and fascia elements are unique (only the doors are shared with the Wraith, according to Rolls). The rear three-quarter view in particular is gorgeous — far lovelier than the blocky Wraith — its rear fenders rising gently over the wheels — Rolls-Royce calls them “the feminine hips of Dawn” — ahem — before tapering in toward the rear. Other noteworthy details are headlamps from the Ghost II, huge 20- or 21-inch wheels, and of course, being a Rolls-Royce, those bitchy rear-hinged coach doors. Top up or down, the Dawn is beautiful. It even makes pinstripes work.

Whether sweeping along the smooth, banked curves in the scenic South African highlands or negotiating the tighter cliff-side corners along on our drive route, the Dawn steered with surprising precision. Even when curves tightened such that the car’s full-size dimensions called for a bit more concentration, the Dawn never put a tire wrong. The dampers lay it on thick, of course, but as with the Ghost and Wraith, the nearly three-ton Dawn allows just enough road feel to inform the pilot of exactly which road imperfections those wide tires will try their best to iron out. Even under hard braking and cornering, the body remains generally stable. That said, while the Dawn may be smaller than the Phantom, it’s still huge and heavy and generally ill-suited to ten-tenth’s driving. Competence shouldn’t be confused with entertainment, and the Dawn’s wide, thin-rimmed steering wheel should serve as an ergonomic deterrent for any hot-shoe that might want to turns it too quickly.

Nor should hot-shoes get too excited by the Ghost-sourced 6.6-liter twin-turbo V12. With 563 horsepower and 575 pound-feet of torque, the Dawn is no shrinking violet but the silent character and seamless shifts of the eight-speed transmission keep the driver relatively disengaged from the engine’s activities. Suffice it to say that power and torque are sufficient and turbo lag, well, isn’t, but if you want to shift yourself, forget about it; the Dawn doesn’t even have a tachometer, but rather a “power reserve” gauge to inform you of how much power you’re not exercising. We’ll have to take Rolls-Royce’s word that it can hit 62 in 4.9 seconds on its way to a top speed limited to 155 miles per hour; on one brave straightaway, we took the car up to a very windy 135 mph, which felt utterly surreal and, frankly, inappropriate. 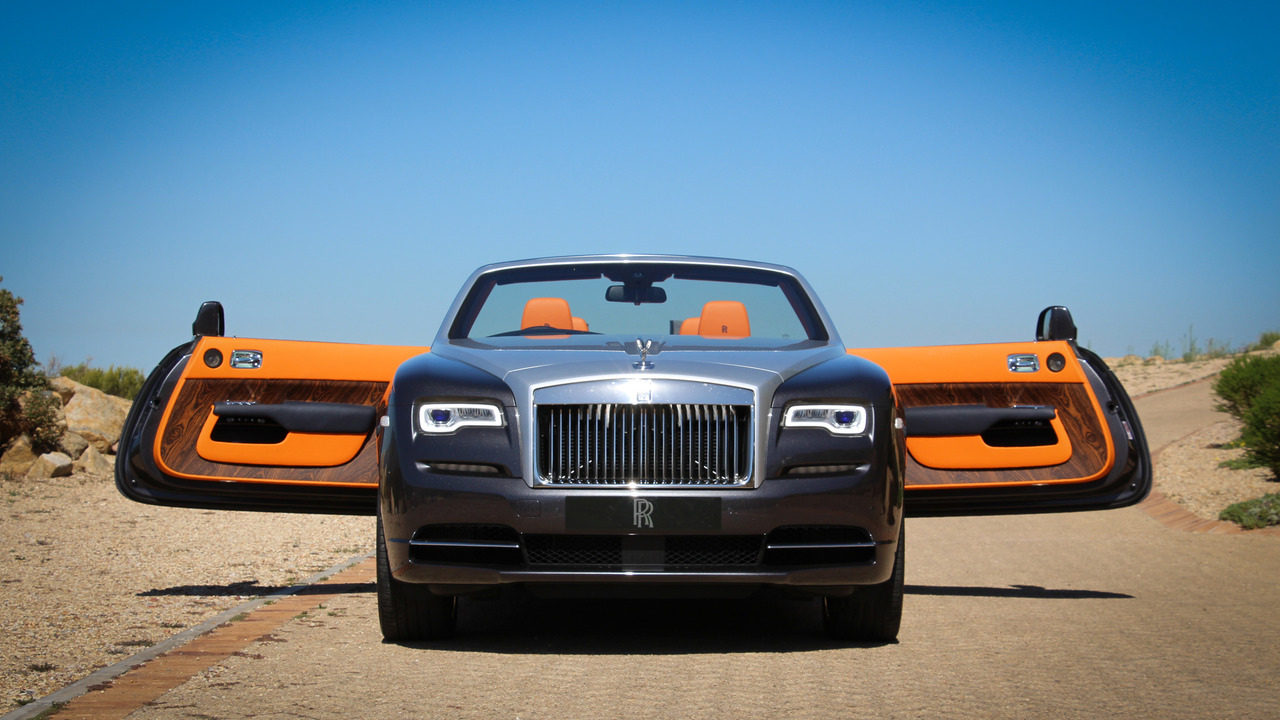 Perhaps we should have put the top up, a process that would have required a slowish 22 seconds but can be performed at speeds of up to 31 mph, in case the stoplight turns green while the top is mid-pike. With no fewer than six layers of insulation, the Dawn’s top insulates the car from outside noises nearly as well as the hardtop Wraith, according to Rolls-Royce, whilst allowing a muted pitter-patter of raindrops on the lid to romance the occupants during inclement weather. We can attest to the lid’s impressive acoustic insulation after a short spell of top-up driving, but with drive happening on an utterly perfect sunny day, the pitter-patter sound test would have to wait for another time.

The Dawn is at its best when driven top-down and with little urgency, thus allowing onlookers to take in its beauty and cast envious stares at its four lucky occupants, sitting as they are on oceans of impossibly soft cowhides and facing veneers of aluminum and sexy book-faced wood. Rolls intended for the Dawn to be an eminently social space, so the rear huge seats are the veritable envy of the six-figure ragtop world. Our example wore a stunning two-tone gray with searing orange leather trim, all fitted with utter precision but with an occasional wavering stitch showing that real human beings, not an army of machines, put this beast together.  That sort of tailor-made quality is what Rolls-Royces are known for, and indeed are what make them feel so alive. It’s is the stuff that makes the Dawn feel worth its heady $339,850 base price.

We returned the Dawn at sunset, ironically, the roof still down, our noses slightly sun-kissed. We could have changed into a tux and headed to a fancy dinner to see how it fares in a more formal setting, but we had already gotten a favorable enough impression of this car as a Rolls-Royce for the daytime, no less elegant than the Ghost and Wraith, yet one that’s less stuffy, less aloof, and more social. It has successfully elbowed its way to the front of the closet.