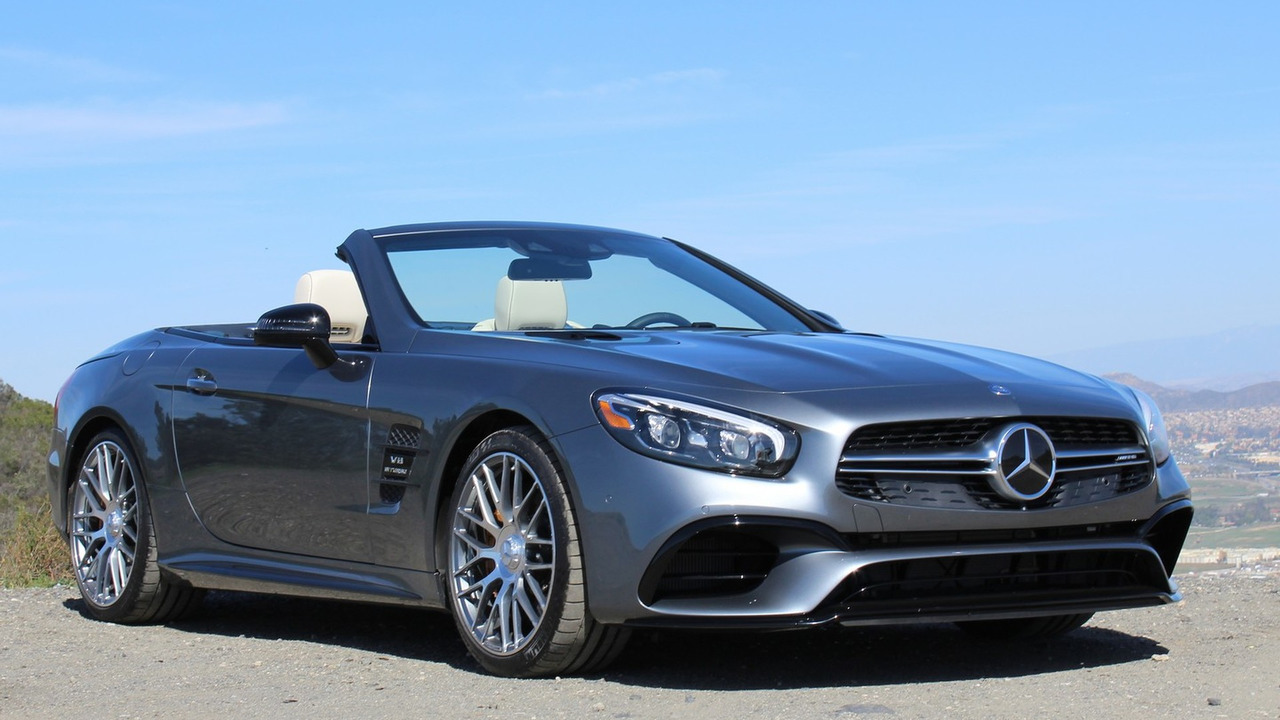 The newest iteration of the Mercedes SL is a grand take on convertible driving. And in this AMG-tuned SL63 flavor, it's a quick take, as well.

At the Pelican Hill resort, I sat behind the driver’s seat of the 2017 Mercedes-AMG SL63 in a darkened room, watching a preview of our drive route projected on a screen in front of the car. After the video ended, the assembled motoring press were instructed to start our engines. In a dramatic moment, a dozen or so engines roared to life in a cacophony of mechanical vigor. The SL63’s distinctly German throttle blip upon startup let me know that it was eager to play. Doors opened, and we drove out of what happened to be a well-staged parking garage and into the Southern California sunshine.

Out in the light, the Mercedes looks impressive. The front end, in particular, is a major aesthetic improvement. The new shape of the grille looks more youthful and sportier, while the air intakes are more visually interesting. The chrome lines are done tastefully. The attractive LED headlights are browed with strips of more LEDs. The contours of the hood play with the natural light in an entertaining way. In the rear, the eyes are drawn to the dual exhaust integrated into the diffuser. The car’s proportions are sporty, with the long hood pointing the way forward. Even with the top up, the SL63 has an elegantly athletic silhouette.

The lengthy drive route stretched from Newport Coast south to Coronado Island along a wide variety of roads. This trip led us down the coastal highway, through inland towns both large and small, through some serious curves on two-lane mountain roads, and even a bit of heavy traffic on the expressway.

Enthusiasts are rarely fond of stop-start systems in their sports cars, and many journalists are often quick to disengage stop-start as soon as they notice it. Nobody likes to wait that extra moment to accelerate away from a stoplight, and a harsh restart can detract from the feeling of refinement. I’m happy to report, however, that the stop-start in the SL63 is minimally disruptive. This engine fires up quickly and smoothly. There’s plenty of urgency on hand that the nearly imperceptible moment it takes for the V8 to come alive is insignificant, especially relative to the advantages of reducing idling time.

The SL63 AMG is impressive in its abundance of customization in terms of driving dynamics. A wheel on the center console selects driving modes: Comfort, Sport, Sport+, and Race. It also includes an Individual mode that allows the driver to choose their own settings, essentially mixing and matching their favorite parameters from the other drive modes. There are also buttons next to the dial that adjust the suspension and stability control, as well as a third button to put the car into manual mode. It’s likely that most drivers will find Comfort and Sport modes will cover 99 percent of their driving needs on public roads.

Comfort mode lives up to its name. It offers an exceptionally smooth ride, and piloting the car is effortless. From a stop, the AMG Speedshift seven-speed transmission starts out in second gear. Even so, the SL63 can take off faster than is necessary, and a sense of urgency feels built into the car’s entire being. In comfort mode, it’s a little easier to control the throttle, though, for a smoother ride. Bumps in the road are ironed out through the softer suspension setting, as well. Both driver and passenger will enjoy the relative serenity of Comfort mode for long-distance highway touring.

In an already aggressive car, the Sport Mode turns the SL63 into an absolute beast. Tap the accelerator, and the biturbocharged 5.5-liter V8 roars to life. Put your right foot to the floor, and the car slams you into your seat like a telekinetic poltergeist. The exhaust’s guttural voice growls fiercely, instilling a sense of brutish manliness in the driver, and either gleeful laughter or profound horror in the passenger.

That’s because the SL63 is over the top in its performance capabilities. With 577 wild horses and 664 pound-feet of twist going to the rear wheels, this car can bolt. Zero to sixty comes in four seconds flat (just one tenth of a second slower than the raging SL65). Acceleration from 60 miles per hour upward also feels ridiculously swift. While I didn’t have the opportunity to approach it on the public roads of the test route, if you need to go that fast, the SL63 has an electronically limited top speed of 186 mph.

Left to its own devices, the updated transmission operates seamlessly. In this version of the SL, though, switching to manual mode and making use of the aluminum paddle shifters is fun without becoming laborious. While a quick, “crisp” shift is always satisfying, the equally brief, but more fluid gear swap in the SL63 does much to add to the confidence that comes with conjuring up the reserves of power from the beast underhood. Just as Robert Johnson supposedly sold his soul in return for guitar mastery, I felt like I was making a similar deal with the devil when operating the car’s throttle and gearbox in tandem. It was sinfully easy to be fast.

The SL63’s steering is another mark under the “win” column for Mercedes. Yes, it feels softened up for comfort. That’s not to say it feels disconnected. It’s boosted in a way that makes sense. While flogging it through the ever-tightening curves on our hilly drive route, the sense of control over the car was superb. The minutiae of the road surface were filtered out – the car is plenty capable of handling those distractions on its own. What’s left is a direct response to the shifting balance of the car through the corners. Regardless of speed, the combined sensation of motion through the seat and the steering wheel offers the information necessary to place the SL63 precisely where the driver wants it to go. The standard rear axle differential lock mitigates wheelspin in the corners, raising the limits of the car’s capabilities.

The suspension plays nice, too, in the twisty bits of road. The SL63 sports a four-wheel independent suspension system with Active Body Control. This does wonders to keep the car level during cornering. From lazy sweepers to uphill and downhill switchbacks to blind, tightening-radius curves, the car felt poised and stable, ever pliant to my commands. It’s not just the car’s balance that helps make it easy to bend to one’s will. Being able to keep one’s body in a proper driving position without fighting lateral g-forces helps considerably when trying to point this speed machine around the bends. The clear sense of motion from the seat and the feedback from the steering wheel come together in a graceful concert of confident control. This car can dance, and it is a willing partner. And if the dance ever gets too dirty, the powerful brakes can bring things to an abrupt halt.

The car’s interior is just as well suited to canyon carving as it is to cruising coastal highways, making it a wonderful touring convertible. The seats are supportive and comfortable, and there is plenty of room for adjustment to fit drivers of varied proportions. The center console offers room for the items you need to keep handy (I recommend sunscreen). There are two cupholders up front, and one in the center just to the rear of the seats. The cubbies behind the seats offer extra storage, and the one behind the driver’s seat was just the right size to accommodate a DSLR camera. The SL63 offers a 900-watt, 12-speaker Bang & Olufsen sound system, but the soundtrack provided by the engine and exhaust is superior to any music (especially Aerosmith) coming through the speakers.

The car’s top can be raised or lowered at up to 25 mph. With the top open, there is a bit of buffeting from the wind at higher speeds. The wind deflector can be deployed with the push of a button, however, and rolling up the forward windows almost entirely eliminates any wind from intruding on the occupants. As someone who usually prefers a roof over his head, the fact that I was reluctant to put the top up speaks to the quality of the SL’s open-air experience. With the top raised, there is 13.5 cubic-feet of cargo space in the trunk. Top down, there’s 8.5 cu-ft to work with – enough room for luggage for a weekend trip.

And if you find yourself making a long, straight trek on just such a weekend, the Mercedes-AMG SL63 has your back. The Distronic Plus with steering assist is a real gem on long journeys. With the ability to keep a set distance behind other vehicles, and the capability to keep the car between the lines, it helps eliminate some of the fatigue that comes with driving in a straight line for long periods of time. The car did have some trouble spotting the lane markings on the Southern California freeways, but roads where the markings were more distinct offered better functionality from the steering assist system.

Mercedes expects the bulk of its SL sales to come from the V6-powered SL450, not the maniacal AMG variants. We’ll have more to say about the other members of the SL Class lineup later. But while the Mercedes-AMG SL63 seems a bit over the top for most drivers – and that goes for price as well as power – the lucky owners who find themselves behind its flat-bottomed wheel when it goes on sale mid-March will have themselves a fine traveling companion, wherever the road may take them.