One of the best rough-road trucks on the market maintains its status thanks to a steady stream of improvements.

Toyota has earned a reputation for its long-lasting, rugged pickups, and part of that famous recipe is familiarity. The company rarely breaks the mold with wild new designs, which is why the 2022 Toyota Tacoma looks a lot like the 2016 model (which also happens to share hard points with a design that dates back to 2005). However, there are a few crucial updates this year that make the mid-size truck better in rugged situations than ever.

Foremost is an enhanced suspension for the 2022 Tacoma TRD Pro, which now enjoys a 1.5-inch front and 0.5-inch rear lift compared to the outgoing flagship. Retuned to take advantage of the new height, the internal-bypass Fox shocks pair with new forged aluminum upper control arms for better control over bumps. In addition to the top-dog TRD Pro, the updated Tacoma Trail Edition brings some off-road capability lower in the lineup. Based on the volume-selling SR5 trim, the Trail gets taller shocks and springs, a standard locking rear differential, and some in-bed cargo boxes, combining versatility with value.

Toyota brought me out to the mountains of Colorado to sample both of these new Tacomas. The midsize pickup lineup soldiers into 2022 with only minor cosmetic, packaging, and technology changes, but that doesn’t mean each member of the family isn’t great fun when the pavement disappears and rocks rise from the forest floor.

Before talking about how the TRD Pro drives, we gotta address the bright green elephant in the room. The top-spec Toyota Tacoma always gets its own single-year signature color, and for 2022, the bold and the brazen can order their TRDs in Electric Lime Metallic. After the initial shock wears off, Electric Lime is a polarizing color. Its critics – members of our traveling party included – will unfavorably compare it to Gatorade. But I actually really like the green, particularly since it has a lot of bright gold highlights playing on the Tacoma’s burly fender flares. Adding visual interest this year is a TRD Pro logo stamped into the bedside.

Unfortunately, the eye-catching color makes some performance promises the carryover 3.5-liter V6 engine just can’t deliver. The Tacoma TRD Pro struggles to keep up with traffic, its 278 horsepower and 261 pound-feet smothered by an unresponsive six-speed automatic transmission – a six-speed stick is standard for DIYers. The slushbox (and I do mean slushbox) upshifts far too early for speedy green-light escapes, and it refuses to downshift unless given a heavy flooring. Slotting the gear selector into its sport gate doesn’t help. On-road, the Nissan Frontier’s 310-hp V6 and nine-speed auto are far better at acquiring momentum.

Adding insult to injury is some gritty underhood racket that gives way to a droning TRD performance exhaust. Luckily, the 2022 TRD Pro has a well-controlled highway ride and decent sound insulation that help it compensate somewhat for its patience-taxing engine performance. Those TRD-tuned Fox dampers do a decent job of keeping potholes and gritty pavement at bay, and wind and tire roar are hushed. An eight-way power driver’s seat provides just enough thigh support for my 32-inch inseam, and there’s barely enough headroom under the standard sunroof to keep me from hitting my noggin over big bumps.

Speaking of, the Tacoma TRD Pro is at its absolute best when abandoning pavement altogether. As the midsize pickup family’s off-road flagship, the Pro gets a long list of technology and traction aids that improve grip and stability in a variety of slow, craggy situations. Our long convoy of trucks started its Colorado journey near South Park (yes, that South Park), climbing a long, winding dirt road toward Georgia Pass. For this steep trail, I left my Pro with only the rear axle online, saving four-wheel drive for later in the day. 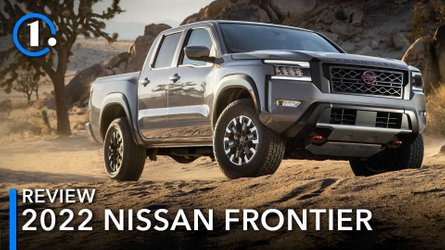 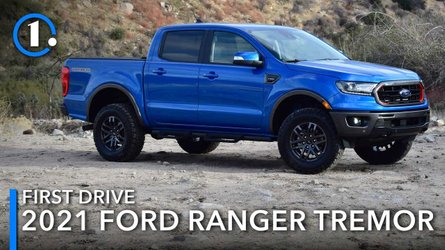 Even in two-wheel drive, the Taco supreme was a faultlessly surefooted machine. The Fox dampers do a very impressive job of taming body motions at speed on the dirt, and cruising over undulations at about 25 miles per hour was its sweet spot, yomping through big dips without bottoming out or hopping around – credit that added rebound travel. After a few miles of relatively speedy wheeling, our crew slowed to a near-crawl, and we all switched into four-wheel drive. Doing so unlocked use of Toyota’s Multi-Terrain Select (MTS), which tunes the TRD Pro’s throttle and stability controls for sandy and muddy driving.

Slowing even further and facing the ravages of altitude, we all soon clicked over into the transfer case’s low range to give the engine just a bit more torque at the wheels – come to a complete stop, shift into neutral, and push and turn a knob just left of the infotainment system. Set up thus, Crawl Control becomes available, managing braking and throttle at very low speeds to allow the driver to focus on creeping over rocks and logs. Multi-Terrain Select offers three additional modes in 4-Low – loose rock, boulders, and snow – and the locking rear differential becomes available. 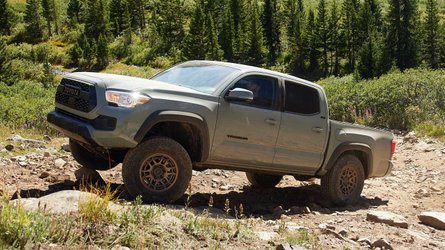 More than anything else, that locking axle ascended to superstar status, allowing me to creep through loose shale with zero drama. Surprisingly enough, the Tacoma also doesn’t lose much in the way of maneuverability when locked up, making tight forest corners without much protest. Crawl Control still seems a bit gimmicky to me, with too many actuator noises and too little driver involvement to be fun. There are videos of the drive system unsticking trucks that are buried in a foot of sand, so it definitely has a use – I just didn’t really test its mettle in two days of Rocky Mountain off-roading.

Even so, the Tacoma TRD Pro is a near-perfect travel companion on some of Georgia Pass’ more difficult trails and lines. In both MTS’ Rock and Loose Rock modes, throttle response is blunt, which allows the driver to dial in just the right amount of torque to get the vehicle moving (but not so much that it loses traction in a flurry of wheelspin). And a run up a much more technical out-and-back trail proved that the top-spec off-roader’s 9.4 inches of ground clearance and 36.4-degree approach, 24.7-degree departure, and 26.6-degree breakover angles are more than enough for even the most strenuous mountain trails.

Overall, the 2022 Tacoma TRD Pro is incrementally better than the outgoing vehicle, with improved suspension composure (both around town and on dirt) and better geometry. It’s not so drastic a difference as to make 2021 owners feel like they’re missing out, but these steady improvements are what help keep Toyota at the top of the off-road heap. I wish it weren’t so restrictive in terms of its software – locking that rear differential in either two-wheel drive or 4-high would be a nice feature, for example (and one the Ford Ranger allows). But the top-dog Tacoma is still sure to impress those looking for Toyota’s best off-road hardware.

On the other hand, anyone on a tighter budget should definitely put the Tacoma Trail Edition on their shopping list. Based on the $35,655 SR5 model, the Trail Edition is only available in crew-cab, short-bed form with standard four-wheel drive and an automatic transmission.

The $3,765 Trail Edition package adds a 1.1-inch front and 0.5-inch rear suspension lift and a locking rear differential to the mix, as well as a pair of storage compartments to the inside of the bed (the driver-side one is even able to function as a cooler). A bold TOYOTA-script front grille and bronze badging and wheels set the Trail apart too. All that gear comes with a total cost of $40,635 including the $1,215 destination charge, which is confusingly more money than a mechanically similar 2021 TRD Off-Road (though that vehicle sits a bit lower to the ground). As such, Toyota’s “entry-level” off-roader is a bit of a noodle scratcher.

Lacking Crawl Control or Multi-Terrain Select, the Trail is simpler to just jump in and drive, and there’s no denying the advantages of its added ground clearance. Still, it doesn’t work quite as well on the trails as either the slow-speed–friendly TRD Off-Road or flagship TRD Pro. On a long incline littered with loose rock and shale, the Trail Edition definitely required more finesse to keep moving.

There may have been something wrong with the pre-production locking rear differential, and since we’ve never had such issues on other Tacomas, we’re willing to withhold final judgement until we’ve driven a series-production Trail Edition. But even with an open diff, the Trail still found its way through the steep scree field, its stability and traction controls sending power to the wheels that had grip.

The lifted suspension was another boon to off-roading, opening up the same 9.4 inches of ground clearance as the TRD Pro (though the Trail’s respective approach, departure, and breakover angles of 34.0, 23.6, and 26.4 degrees are down a bit on its more robust sibling). The shock absorbers were obviously less capable of handling bumps than those of the TRD Pro, with a few surprising bottom-outs through big dips in the road at speed. However, over larger rocks and at slower speeds, there was little to complain about.

Unfortunately, my tester was saddled with the same recalcitrant engine and transmission combo as its TRD Off-Road and Pro siblings, and its cloth-upholstered interior is a touch more spartan – no 360-degree camera system or heated seats, and you start the truck with an old-fashioned key. But those elements add to the Trail’s charm, removing features you don’t need without sacrificing much ruggedness. Toyota seems to think the Trail Edition is perfect for folks who already know how to off-road and don’t need the electronic nannies to step in and take over.

Still, it’s a bit hard to stomach the idea of a more expensive, less well-equipped pickup compared to a $38,745 TRD Off-Road, whose Bilstein suspension is nearly perfectly tuned even if it lacks the Trail’s added altitude. Those with Luddite tendencies would perhaps be better served with a base, $36,870 SR5 model fitted with the $1,450 TRD accessory lift kit. Though it wouldn’t have the bronze badging, wheels, or bed cubbies of the Trail Edition, such a vehicle would likely scratch that budget-friendly lifted-pickup itch at a price of $38,320 plus installation.

Even so, after two days in the saddle, I came away as enamored with the Tacoma family as I always have been. Yes, its infotainment software is dated, and no, its active safety technology doesn’t offer lane centering or full-speed adaptive cruise control. The driver’s seat does get a bit tiresome after a few hours behind the wheel, and seriously, Toyota, when are you going to retune that automatic transmission to take advantage of the V6’s already narrow torque band?

But for all its faults, the Tacoma is a relentless charmer, cloying you into loving its off-road personality and Mountain West cachet. Toyota has taken the off-road Tacoma lineup in both directions for 2022, improving the TRD Pro at the top while adding the cheap-and-cheerful Trail Edition somewhere around the bottom. Both appeal to different customers, but I’m sure they’ll be as taken in by the Tacoma’s raw magnetism as I was.